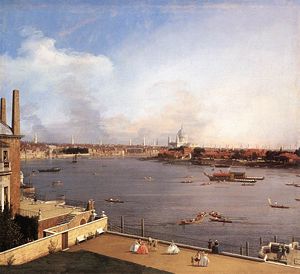 A veduta is a highly detailed, usually large-scale painting
Painting
Painting is the practice of applying paint, pigment, color or other medium to a surface . The application of the medium is commonly applied to the base with a brush but other objects can be used. In art, the term painting describes both the act and the result of the action. However, painting is...
of a cityscape or some other vista.

This genre
Genre
Genre , Greek: genos, γένος) is the term for any category of literature or other forms of art or culture, e.g. music, and in general, any type of discourse, whether written or spoken, audial or visual, based on some set of stylistic criteria. Genres are formed by conventions that change over time...
of landscape
Landscape art
Landscape art is a term that covers the depiction of natural scenery such as mountains, valleys, trees, rivers, and forests, and especially art where the main subject is a wide view, with its elements arranged into a coherent composition. In other works landscape backgrounds for figures can still...
originated in Flanders
Flanders
Flanders is the community of the Flemings but also one of the institutions in Belgium, and a geographical region located in parts of present-day Belgium, France and the Netherlands. "Flanders" can also refer to the northern part of Belgium that contains Brussels, Bruges, Ghent and Antwerp...
, where artists such as Paul Brill
Paul Brill
Paul Brill is a multiple Emmy Award-nominated composer, songwriter and producer based in Brooklyn, NY. He has scored dozens of feature films, television series and commercials, most notably including: Joan Rivers: A Piece of Work, The Devil Came on Horseback, The Trials of Darryl Hunt,...
painted vedute as early as the 16th century. In the 17th century Dutch painters made a specialty of detailed and accurate recognizable city and landscapes that appealed to the sense of local pride of the wealthy Dutch middle class. An archetypal example is Johannes Vermeer
Johannes Vermeer
Johannes, Jan or Johan Vermeer was a Dutch painter who specialized in exquisite, domestic interior scenes of middle class life. Vermeer was a moderately successful provincial genre painter in his lifetime...
's View of Delft
View of Delft (Vermeer)
View of Delft is an oil painting by Johannes Vermeer. Painted ca. 1660-1661, the painting of the Dutch artist's hometown is among his most popular. Painted at a time when cityscapes were not commonplace, it is one of three known paintings of Delft by Vermeer, along with The Little Street and the...
.

As the itinerary of the Grand Tour
Grand Tour
The Grand Tour was the traditional trip of Europe undertaken by mainly upper-class European young men of means. The custom flourished from about 1660 until the advent of large-scale rail transit in the 1840s, and was associated with a standard itinerary. It served as an educational rite of passage...
became somewhat standardized, vedute of familiar scenes like the Roman Forum or the Grand Canal recalled early ventures to the Continent for aristocratic Englishmen. By the mid-18th century, Venice
Venice
Venice is a city in northern Italy which is renowned for the beauty of its setting, its architecture and its artworks. It is the capital of the Veneto region...
became renowned as the centre of the vedutisti. The genre's greatest practitioners belonged to the Canal and Guardi
Francesco Guardi
Francesco Lazzaro Guardi was a Venetian painter of veduta, a member of the Venetian School. He is considered to be among the last practitioners, along with his brothers, of the classic Venetian school of painting....
families of Venice. Some of them went to work as painters in major capitals of Europe, e.g., Canaletto
Canaletto
Giovanni Antonio Canal better known as Canaletto , was a Venetian painter famous for his landscapes, or vedute, of Venice. He was also an important printmaker in etching.- Early career :...
in London
London
London is the capital city of :England and the :United Kingdom, the largest metropolitan area in the United Kingdom, and the largest urban zone in the European Union by most measures. Located on the River Thames, London has been a major settlement for two millennia, its history going back to its...
and his nephew Bernardo Bellotto
Bernardo Bellotto
Bernardo Bellotto was a Venitian urban landscape painter or vedutista, and printmaker in etching famous for his vedutes of European cities . He was the pupil and nephew of Canaletto and sometimes used the latter's illustrious name, signing himself as Bernardo Canaletto...
in Dresden
Dresden
Dresden is the capital city of the Free State of Saxony in Germany. It is situated in a valley on the River Elbe, near the Czech border. The Dresden conurbation is part of the Saxon Triangle metropolitan area....
and Warsaw
Warsaw
Warsaw is the capital and largest city of Poland. It is located on the Vistula River, roughly from the Baltic Sea and from the Carpathian Mountains. Its population in 2010 was estimated at 1,716,855 residents with a greater metropolitan area of 2,631,902 residents, making Warsaw the 10th most...
.

In other parts of 18th-century Italy, idiosyncratic varieties of the genre evolved. Giovanni Paolo Pannini
Giovanni Paolo Pannini
Giovanni Paolo Panini or Pannini was a painter and architect, who worked in Rome and is mainly known as one of the vedutisti ....
was the first veduta artist to concentrate on painting ruins. Vanvitelli and others painted veduta esatta. Later, Pannini's veduta morphed into the scenes partly or completely imaginary, known as capricci and vedute ideate or veduta di fantasia. Giambattista Piranesi was the foremost master of vedute ideate etching
Etching
Etching is the process of using strong acid or mordant to cut into the unprotected parts of a metal surface to create a design in intaglio in the metal...
s. His topographical series, Vedute di Roma, went through many printings.

In the later 19th century, more personal "impressions" of cityscapes replaced the desire for topographical accuracy, which was satisfied instead by painted, and later photographed, panorama
Panorama
A panorama is any wide-angle view or representation of a physical space, whether in painting, drawing, photography, film/video, or a three-dimensional model....
s.
The source of this article is wikipedia, the free encyclopedia.  The text of this article is licensed under the GFDL.