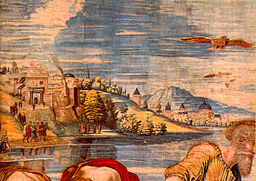 Vatican Hill is the name given, long before the founding of Christianity
Christianity
Christianity is a monotheistic religion based on the life and teachings of Jesus as presented in canonical gospels and other New Testament writings...
, to one of the hills on the side of the Tiber
Tiber
The Tiber is the third-longest river in Italy, rising in the Apennine Mountains in Emilia-Romagna and flowing through Umbria and Lazio to the Tyrrhenian Sea. It drains a basin estimated at...
opposite the traditional seven hills of Rome
Seven hills of Rome
The Seven Hills of Rome east of the river Tiber form the geographical heart of Rome, within the walls of the ancient city.The seven hills are:* Aventine Hill * Caelian Hill...
. It may have been the site of an Etruscan
Etruscan civilization
Etruscan civilization is the modern English name given to a civilization of ancient Italy in the area corresponding roughly to Tuscany. The ancient Romans called its creators the Tusci or Etrusci...
town called Vaticum.

The name "Vatican" has often been thought to derive from the Latin "vates", meaning "seer, soothsayer", though this is uncertain and it is also possible that "Vaticanus" comes from an unrelated Etruscan
Etruscan language
The Etruscan language was spoken and written by the Etruscan civilization, in what is present-day Italy, in the ancient region of Etruria and in parts of Lombardy, Veneto, and Emilia-Romagna...
loan-word. http://www.etymonline.com/index.php?search=vatican&searchmode=none Indeed, the Vatican Hill was the home of the Vates long before pre-Christian Rome. Vaticanus, also known as Vagitanus
Vagitanus
In ancient Roman religion, Vagitanus or Vaticanus was one of a number of childbirth deities who influenced or guided some aspect of parturition, in this instance the newborn's crying. The name is related to the Latin noun vagitus, "crying, squalling, wailing," particularly by a baby or an animal,...
, was an Etruscan god of prophecy, and his temple was built on the ancient site of Vaticanum (Vatican Hill). http://www.ireport.com/docs/DOC-2472

In the 1st century AD, the Vatican Hill was outside the city limits and so could feature a circus
Circus (building)
The Roman circus was a large open-air venue used for public events in the ancient Roman Empire. The circuses were similar to the ancient Greek hippodromes, although serving varying purposes. Along with theatres and amphitheatres, Circuses were one of the main entertainment sites of the time...
(the circus of Nero
Circus of Nero
The Circus of Nero or Circus of Caligula was a circus in ancient Rome.-Construction:It was begun by Caligula on the property of his mother Agrippina on the Ager Vaticanus , and finished by Nero...
) and a cemetery
Cemetery
A cemetery is a place in which dead bodies and cremated remains are buried. The term "cemetery" implies that the land is specifically designated as a burying ground. Cemeteries in the Western world are where the final ceremonies of death are observed...
. St. Peter's Basilica
St. Peter's Basilica
The Papal Basilica of Saint Peter , officially known in Italian as ' and commonly known as Saint Peter's Basilica, is a Late Renaissance church located within the Vatican City. Saint Peter's Basilica has the largest interior of any Christian church in the world...
is built over this cemetery, the traditional site of St. Peter the Apostle's grave. There was another cemetery nearby, which was opened to the public on 10 October 2006 to commemorate the 500th anniversary of the Vatican Museums
Vatican Museums
The Vatican Museums , in Viale Vaticano in Rome, inside the Vatican City, are among the greatest museums in the world, since they display works from the immense collection built up by the Roman Catholic Church throughout the centuries, including some of the most renowned classical sculptures and...
.

The Vatican Hill is not one of the famous seven hills of Rome
Rome
Rome is the capital of Italy and the country's largest and most populated city and comune, with over 2.7 million residents in . The city is located in the central-western portion of the Italian Peninsula, on the Tiber River within the Lazio region of Italy.Rome's history spans two and a half...
although it was included within the city limits of Rome during the reign of Pope Leo IV
Pope Leo IV
Pope Saint Leo IV was pope from 10 April 847 to 17 July 855.A Roman by birth, he was unanimously chosen to succeed Sergius II. When he was elected, on 10 April 847, he was cardinal of Santi Quattro Coronati, and had been subdeacon of Gregory IV and archpriest under his predecessor...
, who, between 848 and 852, expanded the city walls
Leonine City
The Leonine City is that part of the city of Rome around which the ninth-century Pope Leo IV commissioned the construction of the Leonine Wall. It is on the opposite side of the Tiber from the seven hills of Rome and was not enclosed within the ancient city's Aurelian Walls, built between 271 and...
to protect St. Peter's Basilica and the Vatican. Thus, Vatican Hill has been within the walls and city limits of Rome for over 1100 years. Until the Lateran Treaties
Lateran treaties
The Lateran Treaty is one of the Lateran Pacts of 1929 or Lateran Accords, three agreements made in 1929 between the Kingdom of Italy and the Holy See, ratified June 7, 1929, ending the "Roman Question"...
in 1929 it was part of the Rione
Rione
Rione is the name given to a ward in several Italian cities, the best-known of which is Rome. Unlike a quartiere, a rione is usually an official administrative subdivision...
of Borgo
Borgo
Borgo is an Italian word , cognate with English borough, German Burg, French bourg, that now usually means the new town outside the walls of an old town...
.