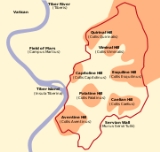 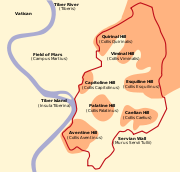 The Caelian Hill is one of the famous Seven Hills
Seven hills of Rome
The Seven Hills of Rome east of the river Tiber form the geographical heart of Rome, within the walls of the ancient city.The seven hills are:* Aventine Hill * Caelian Hill...
of Rome
Rome
Rome is the capital of Italy and the country's largest and most populated city and comune, with over 2.7 million residents in . The city is located in the central-western portion of the Italian Peninsula, on the Tiber River within the Lazio region of Italy.Rome's history spans two and a half...
. Under reign of Tullus Hostilius
Tullus Hostilius
Tullus Hostilius was the legendary third of the Kings of Rome. He succeeded Numa Pompilius, and was succeeded by Ancus Marcius...
, the entire population of Alba Longa
Alba Longa
Alba Longa – in Italian sources occasionally written Albalonga – was an ancient city of Latium in central Italy southeast of Rome in the Alban Hills. Founder and head of the Latin League, it was destroyed by Rome around the middle of the 7th century BC. In legend, Romulus and Remus, founders of...
was forcibly resettled on the Caelian Hill. According to a tradition recounted by Titus Livy, the hill received its name from Caelius Vibenna
Caelius Vibenna
Caelius Vibenna, Caelius Vibenna, Caelius Vibenna, (Etruscan Caile Vipina, was a noble Etruscan who lived c.900BC and brother of Aulus Vibenna (Etruscan Avile Vipina).Upon arriving at Rome, Vibenna aided Romulus in his wars against Titus Tatius. He and his brother Aulus are also recorded as having...
, either because he established a settlement there or because his friend Servius Tullius
Servius Tullius
Servius Tullius was the legendary sixth king of ancient Rome, and the second of its Etruscan dynasty. He reigned 578-535 BC. Roman and Greek sources describe his servile origins and later marriage to a daughter of Lucius Tarquinius Priscus, Rome's first Etruscan king, who was assassinated in 579 BC...
wished to honor him after his death.

In Republican-era Rome
Roman Republic
The Roman Republic was the period of the ancient Roman civilization where the government operated as a republic. It began with the overthrow of the Roman monarchy, traditionally dated around 508 BC, and its replacement by a government headed by two consuls, elected annually by the citizens and...
the Caelian Hill was a fashionable residential district and the site of residences of the wealthy. Archeological work under the Baths of Caracalla
Baths of Caracalla
The Baths of Caracalla in Rome, Italy were Roman public baths, or thermae, built in Rome between AD 212 and 216, during the reign of the Emperor Caracalla.- History :...
have uncovered the remains of lavish villas complete with murals and mosaics. The Caelian is also the site of the Basilica
Basilica
The Latin word basilica , was originally used to describe a Roman public building, usually located in the forum of a Roman town. Public basilicas began to appear in Hellenistic cities in the 2nd century BC.The term was also applied to buildings used for religious purposes...
of Santi Giovanni e Paolo
Santi Giovanni e Paolo (Rome)
Santi Giovanni e Paolo is an ancient basilica church in Rome, located on the Celian Hill. It is also called Santi Giovanni e Paolo al Celio or referred to as SS Giovanni e Paolo....
and the ancient basilica of Santo Stefano Rotondo
Santo Stefano Rotondo
The Basilica of St. Stephen in the Round on the Celian Hill is an ancient basilica and titular church in Rome, Italy. Commonly named Santo Stefano Rotondo, the church is the National church in Rome of Hungary dedicated to Saint Stephen and Saint Stephen of Hungary...
, known for its centralized, circular plan. A significant area of the hill is taken up by the villa and gardens of Villa Celimontana.