Encyclopedia
A Variable Number Tandem Repeat (or VNTR) is a location in a genome
Genome
In modern molecular biology and genetics, the genome is the entirety of an organism's hereditary information. It is encoded either in DNA or, for many types of virus, in RNA. The genome includes both the genes and the non-coding sequences of the DNA/RNA....
where a short nucleotide sequence is organized as a tandem repeat
Tandem repeat
Tandem repeats occur in DNA when a pattern of two or more nucleotides is repeated and the repetitions are directly adjacent to each other. -Example:An example would be:in which the sequence A-T-T-C-G is repeated three times.-Terminology:...
. These can be found on many chromosomes, and often show variations
Polymorphism (biology)
Polymorphism in biology occurs when two or more clearly different phenotypes exist in the same population of a species — in other words, the occurrence of more than one form or morph...
in length between individuals. Each variant acts as an inherited allele
Allele
An allele is one of two or more forms of a gene or a genetic locus . "Allel" is an abbreviation of allelomorph. Sometimes, different alleles can result in different observable phenotypic traits, such as different pigmentation...
, allowing them to be used for personal or parental identification. Their analysis is useful in genetics
Genetics
Genetics , a discipline of biology, is the science of genes, heredity, and variation in living organisms....
and biology
Biology
Biology is a natural science concerned with the study of life and living organisms, including their structure, function, growth, origin, evolution, distribution, and taxonomy. Biology is a vast subject containing many subdivisions, topics, and disciplines...
research, forensics
Forensics
Forensic science is the application of a broad spectrum of sciences to answer questions of interest to a legal system. This may be in relation to a crime or a civil action...
, and DNA fingerprinting.

In the schematic above, the rectangular blocks represent each of the repeated DNA sequences at a particular VNTR location. The repeats are tandem - they are clustered together and oriented in the same direction. Individual repeats can be removed from (or added to) the VNTR via recombination
Genetic recombination
Genetic recombination is a process by which a molecule of nucleic acid is broken and then joined to a different one. Recombination can occur between similar molecules of DNA, as in homologous recombination, or dissimilar molecules, as in non-homologous end joining. Recombination is a common method...
or replication
DNA replication
DNA replication is a biological process that occurs in all living organisms and copies their DNA; it is the basis for biological inheritance. The process starts with one double-stranded DNA molecule and produces two identical copies of the molecule...
errors, leading to alleles with different numbers of repeats. Flanking the repeats are segments of non-repetitive sequence (shown here as thin lines), allowing the VNTR blocks to be extracted with restriction enzymes and analyzed by RFLP
Restriction fragment length polymorphism
In molecular biology, restriction fragment length polymorphism, or RFLP , is a technique that exploits variations in homologous DNA sequences. It refers to a difference between samples of homologous DNA molecules that come from differing locations of restriction enzyme sites, and to a related...
, or amplified by the polymerase chain reaction
Polymerase chain reaction
The polymerase chain reaction is a scientific technique in molecular biology to amplify a single or a few copies of a piece of DNA across several orders of magnitude, generating thousands to millions of copies of a particular DNA sequence....
(PCR) technique and their size determined by gel electrophoresis
Gel electrophoresis
Gel electrophoresis is a method used in clinical chemistry to separate proteins by charge and or size and in biochemistry and molecular biology to separate a mixed population of DNA and RNA fragments by length, to estimate the size of DNA and RNA fragments or to separate proteins by charge...
.


Use of VNTRs in genetic analysis

VNTRs were an important source of RFLP genetic marker
Genetic marker
A genetic marker is a gene or DNA sequence with a known location on a chromosome that can be used to identify cells, individuals or species. It can be described as a variation that can be observed...
s used in linkage analysis
Genetic linkage
Genetic linkage is the tendency of certain loci or alleles to be inherited together. Genetic loci that are physically close to one another on the same chromosome tend to stay together during meiosis, and are thus genetically linked.-Background:...
(mapping) of genomes. Now that many genomes have been sequenced
Human Genome Project
The Human Genome Project is an international scientific research project with a primary goal of determining the sequence of chemical base pairs which make up DNA, and of identifying and mapping the approximately 20,000–25,000 genes of the human genome from both a physical and functional...
, VNTRs have become essential to forensic crime investigations, via DNA fingerprinting and the CODIS
Combined DNA Index System
The Combined DNA Index System is a DNA database funded by the United States Federal Bureau of Investigation . It is a computer system that stores DNA profiles created by federal, state, and local crime laboratories in the United States, with the ability to search the database to assist in the...
database. When removed from surrounding DNA by the PCR or RFLP methods, and their size determined by gel electrophoresis or Southern blot
Southern blot
A Southern blot is a method routinely used in molecular biology for detection of a specific DNA sequence in DNA samples. Southern blotting combines transfer of electrophoresis-separated DNA fragments to a filter membrane and subsequent fragment detection by probe hybridization. The method is named...
ting, they produce a pattern of bands unique to each individual. When tested with a group of independent VNTR markers, the likelihood of two unrelated individuals having the same allelic pattern is extremely improbable. VNTR analysis is also being used to study genetic diversity
Genetic diversity
Genetic diversity, the level of biodiversity, refers to the total number of genetic characteristics in the genetic makeup of a species. It is distinguished from genetic variability, which describes the tendency of genetic characteristics to vary....
and breeding patterns in populations
Population genetics
Population genetics is the study of allele frequency distribution and change under the influence of the four main evolutionary processes: natural selection, genetic drift, mutation and gene flow. It also takes into account the factors of recombination, population subdivision and population...
of wild or domesticated animals. 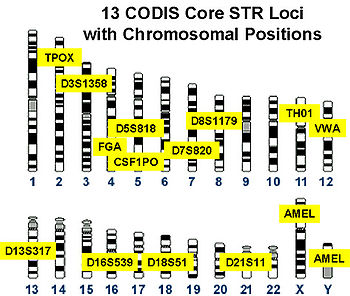 Relationship to other types of repetitive DNA

Repetitive DNA
Repeated sequence (DNA)
In the study of DNA sequences, one can distinguish two main types of repeated sequence:*Tandem repeats:**Satellite DNA**Minisatellite**Microsatellite*Interspersed repeats:**SINEs...
, representing over 40% of the human genome, is arranged in a bewildering array of patterns. Repeats were first identified by the extraction of Satellite DNA
Satellite DNA
Satellite DNA consists of very large arrays of tandemly repeating, non-coding DNA. Satellite DNA is the main component of functional centromeres, and form the main structural constituent of heterochromatin....
, which does not reveal how they are organized. The use of restriction enzymes showed that some repeat blocks
Alu sequence
An Alu element is a short stretch of DNA originally characterized by the action of the Alu restriction endonuclease. Alu elements of different kinds occur in large numbers in primate genomes. In fact, Alu elements are the most abundant mobile elements in the human genome. They are derived from the...
were interspersed
Interspersed repeat
Interspersed repetitive DNA is found in all eukaryotic genomes. Certain classes of these sequences propagate themselves by RNA mediated transposition, and they have been called retrotransposons. Interspersed repetitive DNA elements allow new genes to evolve. They do this by uncoupling similar DNA...
throughout the genome. DNA sequencing
DNA sequencing
DNA sequencing includes several methods and technologies that are used for determining the order of the nucleotide bases—adenine, guanine, cytosine, and thymine—in a molecule of DNA....
later showed that other repeats are clustered at specific locations, with tandem repeats being more common than inverted repeats (which may interfere with DNA replication). VNTRs are the class of clustered tandem repeats that exhibit allelic variation in their lengths.

There are two principal families of VNTRs: microsatellites and minisatellite
Minisatellite
A minisatellite is a section of DNA that consists of a short series of bases 10-60 bp. These occur at more than 1,000 locations in the human genome...
s. The former are repeats of sequences less than about 5 base pair
Base pair
In molecular biology and genetics, the linking between two nitrogenous bases on opposite complementary DNA or certain types of RNA strands that are connected via hydrogen bonds is called a base pair...
s in length (an arbitrary cutoff), while the latter involve longer blocks. Confusing this distinction is the recent use of the terms Short Tandem Repeat
Short tandem repeat
A short tandem repeat in DNA occurs when a pattern of two or more nucleotides are repeated and the repeated sequences are directly adjacent to each other. The pattern can range in length from 2 to 5 base pairs and is typically in the non-coding intron region...
(STR) and Simple Sequence Repeat (SSR), which are more descriptive, but whose definitions are similar to that of microsatellites. VNTRs with very short repeat blocks may be unstable
Microsatellite instability
Microsatellites are repeated sequences of DNA. Although the length of these microsatellites is highly variable from person to person, each individual has microsatellites of a set length. These repeated sequences are common, and normal...
- dinucleotide repeats may vary from one tissue to another within an individual, while trinucleotide repeats have been found to vary from one generation to another (see Huntington's disease
Huntington's disease
Huntington's disease, chorea, or disorder , is a neurodegenerative genetic disorder that affects muscle coordination and leads to cognitive decline and dementia. It typically becomes noticeable in middle age. HD is the most common genetic cause of abnormal involuntary writhing movements called chorea...
). The 13 assays used in the CODIS database are usually referred to as STRs, and most analyze VNTRs that involve repeats of 4 base pairs.