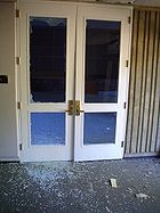 Overview
Vandalism is the behaviour attributed originally to the Vandals, by the Roman
Ancient Rome
Ancient Rome was a thriving civilization that grew on the Italian Peninsula as early as the 8th century BC. Located along the Mediterranean Sea and centered on the city of Rome, it expanded to one of the largest empires in the ancient world....
s, in respect of culture
Culture
Culture is a term that has many different inter-related meanings. For example, in 1952, Alfred Kroeber and Clyde Kluckhohn compiled a list of 164 definitions of "culture" in Culture: A Critical Review of Concepts and Definitions...
: ruthless destruction or spoiling of anything beautiful
Beauty
Beauty is a characteristic of a person, animal, place, object, or idea that provides a perceptual experience of pleasure, meaning, or satisfaction. Beauty is studied as part of aesthetics, sociology, social psychology, and culture...
or venerable
Venerable
The Venerable is used as a style or epithet in several Christian churches. It is also the common English-language translation of a number of Buddhist titles.-Roman Catholic:...
. The term also includes criminal damage such as graffiti
Graffiti
Graffiti is the name for images or lettering scratched, scrawled, painted or marked in any manner on property....
and defacement
Defacement (vandalism)
In common usage, to deface something refers to marking or removing the part of an object designed to hold the viewers' attention. Example acts of defacement could include scoring a book cover with a blade, splashing paint over a painting in a gallery, or smashing the nose of a sculpted bust...
directed towards any property without permission of the owner.
The Vandals
Vandals
The Vandals were an East Germanic tribe that entered the late Roman Empire during the 5th century. The Vandals under king Genseric entered Africa in 429 and by 439 established a kingdom which included the Roman Africa province, besides the islands of Sicily, Corsica, Sardinia and the Balearics....
, an ancient Germanic people, are associated with senseless destruction as a result of their sack of Rome
Sack of Rome (455)
The sack of 455 was the second of three barbarian sacks of Rome; it was executed by the Vandals, who were then at war with the usurping Western Roman Emperor Petronius Maximus....
under King Genseric
Genseric
Genseric , also spelled as Geiseric or Gaiseric, was King of the Vandals and Alans and was one of the key players in the troubles of the Western Roman Empire in the 5th century...
in 455.