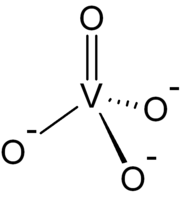 In chemistry, a vanadate is a compound containing an oxoanion of vanadium
Vanadium
Vanadium is a chemical element with the symbol V and atomic number 23. It is a hard, silvery gray, ductile and malleable transition metal. The formation of an oxide layer stabilizes the metal against oxidation. The element is found only in chemically combined form in nature...
generally in its highest oxidation state
Oxidation state
In chemistry, the oxidation state is an indicator of the degree of oxidation of an atom in a chemical compound. The formal oxidation state is the hypothetical charge that an atom would have if all bonds to atoms of different elements were 100% ionic. Oxidation states are typically represented by...
of +5. The simplest vanadate ion is the tetrahedral, orthovanadate, VO43− anion, which is present in e.g. sodium orthovanadate
Sodium orthovanadate
Sodium orthovanadate is the chemical compound Na3VO4 and contains the tetrahedral VO43−. It is an inhibitor of protein tyrosine phosphatases, alkaline phosphatases and a number of ATPases, most likely acting as a phosphate analogue...
and in solutions of V2O5 in strong base (pH
PH
In chemistry, pH is a measure of the acidity or basicity of an aqueous solution. Pure water is said to be neutral, with a pH close to 7.0 at . Solutions with a pH less than 7 are said to be acidic and solutions with a pH greater than 7 are basic or alkaline...
> 13 ). Conventionally this ion is represented with a single double bond, however this is a resonance form
Resonance (chemistry)
In chemistry, resonance or mesomerism is a way of describing delocalized electrons within certain molecules or polyatomic ions where the bonding cannot be expressed by one single Lewis formula...
as the ion is a regular tetrahedron with four equivalent oxygen atoms.

Additionally a range of polyoxovanadate ions exist which include discrete ions and "infinite" polymeric ions. There are also vanadates, such as rhodium vanadate, RhVO4, which has a statistical rutile
Titanium dioxide
Titanium dioxide, also known as titanium oxide or titania, is the naturally occurring oxide of titanium, chemical formula . When used as a pigment, it is called titanium white, Pigment White 6, or CI 77891. Generally it comes in two different forms, rutile and anatase. It has a wide range of...
structure where the Rh3+ and V5+ ions randomly occupy the Ti4+ positions in the rutile lattice, that do not contain a lattice of cations and balancing vanadate anions but are mixed oxide
Mixed oxide
In chemistry, a mixed oxide is a somewhat informal name for an oxide that contains more than one chemical element in its cation, or of a single element cation that has atoms in several states of oxidation....
s.

In chemical nomenclature when vanadate forms part of the name, it indicates that the compound contains an anion with a central vanadium atom, e.g. ammonium hexafluorovanadate is a common name for the compound (NH4)3VF6 with the IUPAC name
IUPAC nomenclature of inorganic chemistry 2005
The Nomenclature of Inorganic Chemistry, IUPAC Recommendations 2005, commonly known as The Red Book, is a collection of rules for naming inorganic compounds, as recommended by the IUPAC.- Summary :...
of ammonium hexafluoridovanadate(V).

Some examples of discrete ions are

Some examples of polymeric “infinite” ions are

In these ions vanadium exhibits tetrahedral, square pyramidal and octahedral coordination. In this respect vanadium shows similarities to W
Tungstate
In chemistry a tungstate is a compound that contains an oxoanion of tungsten or is a mixed oxide containing tungsten. The simplest tungstate ion is WO42−, "orthotungstate"...
and Mo
Molybdate
In chemistry a molybdate is a compound containing an oxoanion with molybdenum in its highest oxidation state of 6. Molybdenum can form a very large range of such oxoanions which can be discrete structures or polymeric extended structures, although the latter are only found in the solid state.The...
, chromium however has a more limited range of ions.

Dissolution of vanadium pentoxide in strongly basic aqueous solution gives the colourless VO43– ion. On acidification, this solution's colour gradually darkens through orange to red at around pH 7. Brown hydrated V2O5 precipitates around pH 2, redissolving to form a light yellow solution containing the [VO2(H2O)4]+ ion. The number and identity of the oxyanions that exist between pH 13 and 2 depend on as well as concentration. For example, protonation of vanadate initiates a series of condensation
Condensation reaction
A condensation reaction is a chemical reaction in which two molecules or moieties combine to form one single molecule, together with the loss of a small molecule. When this small molecule is water, it is known as a dehydration reaction; other possible small molecules lost are hydrogen chloride,...
s to produce polyoxovanadate ions: