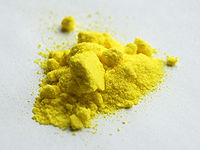 Chromate salts contain the chromate anion, CrO42−. Dichromate salts contain the dichromate anion, Cr2O72−. They are oxyanion
Oxyanion
An oxyanion or oxoanion is a chemical compound with the generic formula AxOyz− . Oxoanions are formed by a large majority of the chemical elements. The formulae of simple oxoanions are determined by the octet rule...
s of chromium
Chromium
Chromium is a chemical element which has the symbol Cr and atomic number 24. It is the first element in Group 6. It is a steely-gray, lustrous, hard metal that takes a high polish and has a high melting point. It is also odorless, tasteless, and malleable...
in the oxidation state
Oxidation state
In chemistry, the oxidation state is an indicator of the degree of oxidation of an atom in a chemical compound. The formal oxidation state is the hypothetical charge that an atom would have if all bonds to atoms of different elements were 100% ionic. Oxidation states are typically represented by...
+6. They are moderately strong oxidizing agent
Oxidizing agent
An oxidizing agent can be defined as a substance that removes electrons from another reactant in a redox chemical reaction...
s.