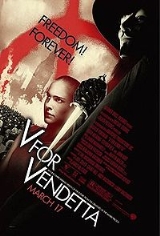 Overview
V for Vendetta is a 2005 dystopian thriller film directed by James McTeigue
James McTeigue
James McTeigue is an Australian film director. He has been an assistant director on many films, including No Escape , the Matrix trilogy and Star Wars Episode II: Attack of the Clones , and made his directorial debut in the 2006 film V for Vendetta.Born on Sydney's North Shore, he grew up in...
and produced by Joel Silver
Joel Silver
Joel Silver is an American Hollywood film producer, co-creator of the sport of Ultimate, co-founder of Dark Castle Entertainment and owner of Silver Pictures.-Life and career:...
and the Wachowski brothers, who also wrote the screenplay. It is an adaptation of the V for Vendetta comic book
V for Vendetta
V for Vendetta is a ten-issue comic book series written by Alan Moore and illustrated mostly by David Lloyd, set in a dystopian future United Kingdom imagined from the 1980s to about the 1990s. A mysterious masked revolutionary who calls himself "V" works to destroy the totalitarian government,...
by Alan Moore
Alan Moore
Alan Oswald Moore is an English writer primarily known for his work in comic books, a medium where he has produced a number of critically acclaimed and popular series, including Watchmen, V for Vendetta, and From Hell...
and David Lloyd. Set in London in a near-future dystopia
Dystopia
A dystopia is the idea of a society in a repressive and controlled state, often under the guise of being utopian, as characterized in books like Brave New World and Nineteen Eighty-Four...
n society, Natalie Portman
Natalie Portman
Natalie Hershlag , better known by her stage name Natalie Portman, is an actress with dual American and Israeli citizenship. Her first role was as an orphan taken in by a hitman in the 1994 French action film Léon, but major success came when she was cast as Padmé Amidala in the Star Wars prequel...
stars as Evey, a working-class girl who must determine if her hero has become the very menace he is fighting against. Hugo Weaving
Hugo Weaving
Hugo Wallace Weaving is a Nigerian born, English-Australian film actor and voice artist. He is best known for his roles as Agent Smith in the Matrix trilogy, Elrond in the Lord of the Rings trilogy, "V" in V for Vendetta, and performances in numerous Australian character dramas.-Early...
plays V—a bold, charismatic freedom fighter driven to exact revenge on those who disfigured him.

[V has just finished his introduction] ...Are you like a crazy person?

I worried about myself for a while. But one day I was at a market and a friend, someone I'd worked with at the BTN, got in line behind me. I was so nervous that when the cashier asked me for my money I dropped it. My friend picked it up and handed it to me. She looked me right in the eye and didn't recognize me. I guess whatever you did to me worked better than I'd ever have imagined.

I remember them arguing at night. Mum wanted to leave the country. dad refused. He said if we ran away, they would win. Win, like it was a game.

Our integrity sells for so little, but it is all we really have. It is the very last inch of us, but within that inch, we are free.