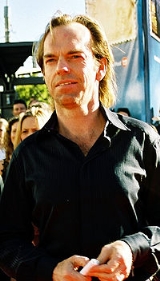 Overview
Hugo Wallace Weaving is a Nigerian born, English-Australian film actor
Actor
An actor is a person who acts in a dramatic production and who works in film, television, theatre, or radio in that capacity...
and voice artist. He is best known for his roles as Agent Smith
Agent Smith
Agent Smith is the main antagonist of The Matrix film series and multimedia franchise, mainly played by actor Hugo Weaving and briefly by actor Ian Bliss in the films and voiced by Christopher Corey Smith in The Matrix: Path of Neo.In 2008, Agent Smith was selected by Empire Magazine as number 84...
in the Matrix trilogy, Elrond
Elrond
Elrond Half-elven is a fictional character in J. R. R. Tolkien's Middle-earth legendarium. He is introduced in The Hobbit, and plays a supporting role in The Lord of the Rings and The Silmarillion.-Character overview:...
in the Lord of the Rings trilogy
The Lord of the Rings film trilogy
The Lord of the Rings is an epic film trilogy consisting of three fantasy adventure films based on the three-volume book of the same name by English author J. R. R. Tolkien. The films are The Fellowship of the Ring , The Two Towers and The Return of the King .The films were directed by Peter...
, "V" in V for Vendetta
V for Vendetta (film)
V for Vendetta is a 2005 dystopian thriller film directed by James McTeigue and produced by Joel Silver and the Wachowski brothers, who also wrote the screenplay. It is an adaptation of the V for Vendetta comic book by Alan Moore and David Lloyd...
, and performances in numerous Australian character dramas.
Weaving was born at the University Teaching Hospital in Ibadan
Ibadan
Ibadan is the capital city of Oyo State and the third largest metropolitan area in Nigeria, after Lagos and Kano, with a population of 1,338,659 according to the 2006 census. Ibadan is also the largest metropolitan geographical area...
, Nigeria, to English parents Anne (née Lennard), a tour guide and former teacher, and Wallace Weaving, a seismologist.

One of the positive aspects from my point of view in terms of lifestyle doing film is that I can say "Well, I'm now going to have three months where I'm just going to hang out and be with the family".

Yes, you like the money and the offers come in, but I don't think I know any actor who really, truly likes that glittery life. I think there's a lot of stress involved if you're up there.

"I do love working in Australia. Generally, the budgets are smaller, the crews are smaller and generally you work at a fast pace. That gives you energy. At the end of the day, you've worked a lot but you don't feel tired. On the big ones, you sit around a lot. That really saps your energy."

"You're certainly pushed into selling yourself as a commodity in order to sell the product. I will engage in the selling of the film. But I will try not to engage in the selling of the image, because I find that it's easier to go on and make another film, because the next character is actually obstructed if your image is bigger than it. So the longer you keep the mask on, metaphorically and physically, the better."

"I think I said something like The Interview was the most fulfilling experience from an acting point of view. And it definitely was. That was a combination of working with a director who was very open and very prepared, and ... working with Tony Martin - just sitting opposite him every day, which is pretty much what we did because the film is essentially a dialogue between two men."