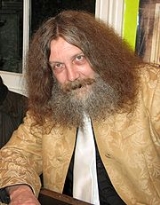 Overview
Alan Oswald Moore is an English writer primarily known for his work in comic books, a medium where he has produced a number of critically acclaimed and popular series, including Watchmen
Watchmen
Watchmen is a twelve-issue comic book limited series created by writer Alan Moore, artist Dave Gibbons, and colourist John Higgins. The series was published by DC Comics during 1986 and 1987, and has been subsequently reprinted in collected form...
, V for Vendetta
V for Vendetta
V for Vendetta is a ten-issue comic book series written by Alan Moore and illustrated mostly by David Lloyd, set in a dystopian future United Kingdom imagined from the 1980s to about the 1990s. A mysterious masked revolutionary who calls himself "V" works to destroy the totalitarian government,...
, and From Hell
From Hell
From Hell is a comic book series by writer Alan Moore and artist Eddie Campbell, originally published from 1991 to 1996, speculating upon the identity and motives of Jack the Ripper. The title is taken from the first words of the "From Hell" letter, which some authorities believe was an authentic...
. Frequently described as the best comic writer in history, he has also been described as "one of the most important British writers of the last fifty years". He has occasionally used such pseudonyms as Curt Vile, Jill de Ray, and Translucia Baboon.

Moore started out writing for British underground and alternative fanzines in the late 1970s before achieving success publishing comic strips in such magazines as 2000AD and Warrior.

Truth is a well-known pathological liar. It invariably turns out to be Fiction wearing a fancy frock. Self-proclaimed Fiction, on the other hand, is entirely honest. You can tell this, because it comes right out and says, "I'm a Liar," right there on the dust jacket.

Most of the people who get sent to die in wars are young men who've got a lot of energy and would probably rather, in a better world, be putting that energy into copulation rather than going over there and blowing some other young man's guts out.

Life isn’t divided into genres. It’s a horrifying, romantic, tragic, comical, science-fiction cowboy detective novel. You know, with a bit of pornography if you're lucky.