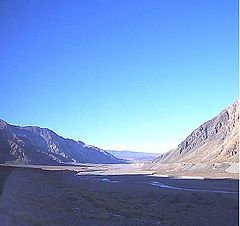 Reaching a maximum altitude of about 3810 m (12,500 ft), the pass runs between the peaks of the 6962 m (22,841 ft) Aconcagua
Aconcagua
Aconcagua is the highest mountain in the Americas at . It is located in the Andes mountain range, in the Argentine province of Mendoza and it lies west by north of its capital, the city of Mendoza. The summit is also located about 5 kilometres from San Juan Province and 15 kilometres from the...
to the north and the 6570 m (21,555 ft) Tupungato
Tupungato
Tupungato, one of the highest mountains in South America, is a massive stratovolcano dating to Pleistocene times. It lies on the border between the Chilean Metropolitan Region and the , near a major international highway about 80 km east of Santiago, Chile. It is located about south of Monte...
to the south.