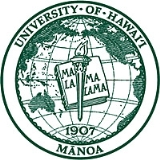 Encyclopedia
The University of Hawaii System, formally the University of Hawaii and popularly known as UH, is a public, co-educational college and university system that confers associate, bachelor, master, and doctoral degrees through three university
University
A university is an institution of higher education and research, which grants academic degrees in a variety of subjects. A university is an organisation that provides both undergraduate education and postgraduate education...
campuses, seven community college
Community college
A community college is a type of educational institution. The term can have different meanings in different countries.-Australia:Community colleges carry on the tradition of adult education, which was established in Australia around mid 19th century when evening classes were held to help adults...
campuses, an employment training center, three university centers, four education centers and various other research facilities distributed across six islands throughout the state of Hawaii
Hawaii
Hawaii is the newest of the 50 U.S. states , and is the only U.S. state made up entirely of islands. It is the northernmost island group in Polynesia, occupying most of an archipelago in the central Pacific Ocean, southwest of the continental United States, southeast of Japan, and northeast of...
in the United States
United States
The United States of America is a federal constitutional republic comprising fifty states and a federal district...
. All schools of the University of Hawaii system are accredited by the Western Association of Schools and Colleges
Western Association of Schools and Colleges
The Western Association of Schools and Colleges is one of six official academic bodies responsible for the accreditation of public and private universities, colleges, secondary and elementary schools in the United States and foreign institutions of American origin. The Western Association of...
. The system's main administrative offices are located on the property of the University of Hawaiʻi at Mānoa in Honolulu CDP
Honolulu, Hawaii
Honolulu is the capital and the most populous city of the U.S. state of Hawaii. Honolulu is the southernmost major U.S. city. Although the name "Honolulu" refers to the urban area on the southeastern shore of the island of Oahu, the city and county government are consolidated as the City and...
.

The University of Hawaii at Mānoa, founded as a land grant college under the terms of the Morrill Act of 1862
Morrill Land-Grant Colleges Act
The Morrill Land-Grant Acts are United States statutes that allowed for the creation of land-grant colleges, including the Morrill Act of 1862 and the Morrill Act of 1890 -Passage of original bill:...
for the benefit of agriculture and the mechanic arts in the United States, is the flagship institution of the University of Hawaii system. It is well respected for its programs in Hawaiian/Pacific Studies, Astronomy
Astronomy
Astronomy is a natural science that deals with the study of celestial objects and phenomena that originate outside the atmosphere of Earth...
, East Asian Languages and Literature, Asian Studies, Comparative Philosophy, Marine Science, Second Language Studies, along with Botany
Botany
Botany, plant science, or plant biology is a branch of biology that involves the scientific study of plant life. Traditionally, botany also included the study of fungi, algae and viruses...
, Engineering
Engineering
Engineering is the discipline, art, skill and profession of acquiring and applying scientific, mathematical, economic, social, and practical knowledge, in order to design and build structures, machines, devices, systems, materials and processes that safely realize improvements to the lives of...
, Ethnomusicology
Ethnomusicology
Ethnomusicology is defined as "the study of social and cultural aspects of music and dance in local and global contexts."Coined by the musician Jaap Kunst from the Greek words ἔθνος ethnos and μουσική mousike , it is often considered the anthropology or ethnography of music...
, Geophysics
Geophysics
Geophysics is the physics of the Earth and its environment in space; also the study of the Earth using quantitative physical methods. The term geophysics sometimes refers only to the geological applications: Earth's shape; its gravitational and magnetic fields; its internal structure and...
, Law
Law
Law is a system of rules and guidelines which are enforced through social institutions to govern behavior, wherever possible. It shapes politics, economics and society in numerous ways and serves as a social mediator of relations between people. Contract law regulates everything from buying a bus...
, Linguistics
Linguistics
Linguistics is the scientific study of human language. Linguistics can be broadly broken into three categories or subfields of study: language form, language meaning, and language in context....
, Mathematics
Mathematics
Mathematics is the study of quantity, space, structure, and change. Mathematicians seek out patterns and formulate new conjectures. Mathematicians resolve the truth or falsity of conjectures by mathematical proofs, which are arguments sufficient to convince other mathematicians of their validity...
, and Medicine
Medicine
Medicine is the science and art of healing. It encompasses a variety of health care practices evolved to maintain and restore health by the prevention and treatment of illness....
. The second-largest institution is the University of Hawaii at Hilo on the Big Island of Hawaii
Hawaii (island)
The Island of Hawaii, also called the Big Island or Hawaii Island , is a volcanic island in the North Pacific Ocean...
. It teaches over 3,000 students. The smaller University of Hawaii-West Oahu in Pearl City
Pearl City, Hawaii
Pearl City is a census-designated place located in the Ewa District and City & County of Honolulu on the Island of Oahu. As of the 2010 Census, the CDP had a total population of 47,698. Pearl City is located along the north shore of Pearl Harbor. ʻAiea borders Pearl City to the east, while Waipahu...
primarily serves students who reside on Honolulu's western and central suburban communities.
The University of Hawaii Community College system comprises four campuses on Oahu and one each on Maui, Kauai, and Hawaii. The schools were created to improve accessibility of courses to more Hawaii residents and provide an affordable means of easing the transition from high school to college for many students. University of Hawaii education centers are located in more remote areas of the state, supporting rural communities via distance education.

The mission of the University of Hawaii system is to provide quality college and university education and training; create knowledge through research and scholarship; provide service through extension, technical assistance, and training; contribute to the cultural heritage of the community; and respond to state needs. The campuses, organized under one board, differentially emphasize instruction, research, and service. The system's special distinction is found in its Hawaiian, Asian, and Pacific orientation and international leadership role. Common values bind the system together: aloha; academic freedom
Academic freedom
Academic freedom is the belief that the freedom of inquiry by students and faculty members is essential to the mission of the academy, and that scholars should have freedom to teach or communicate ideas or facts without being targeted for repression, job loss, or imprisonment.Academic freedom is a...
and intellectual vigor; institutional integrity and service; quality and opportunity; diversity, fairness, and equity; collaboration and respect; and accountability and fiscal integrity.

In the entire University of Hawaii system, there are approximately 50,317 students of which 44,122 are undergraduates. On average, the student body is 42% male and 58% female. 20% are Caucasian, 20% are Japanese
Japanese American
are American people of Japanese heritage. Japanese Americans have historically been among the three largest Asian American communities, but in recent decades have become the sixth largest group at roughly 1,204,205, including those of mixed-race or mixed-ethnicity...
, 15% are Filipino
Filipino American
Filipino Americans are Americans of Filipino ancestry. Filipino Americans, often shortened to "Fil-Ams", or "Pinoy",Filipinos in what is now the United States were first documented in the 16th century, with small settlements beginning in the 18th century...
, 13% are Hawaiian
Native Hawaiians
Native Hawaiians refers to the indigenous Polynesian people of the Hawaiian Islands or their descendants. Native Hawaiians trace their ancestry back to the original Polynesian settlers of Hawaii.According to the U.S...
or part Hawaiian and 32% are from other ethnicities. 89% of the professors reside in Hawaii while 6% are from the United States mainland. A total of 616 programs are offered throughout the University of Hawaii system with 123 devoted for bachelor's degrees, 92 for master's degrees, 53 for doctoral degrees, 3 for first professional degrees, 4 for post baccalaureate degrees, 115 for associate's degrees and various other certifications.

The University seal contains a torch and a book titled Mālamalama (the light of knowledge) in the center of a circular map of the Pacific, surrounded by the state motto, Ua mau ke ea o ka āina i ka pono ("The life of the land is perpetuated in (by) righteousness".) The University motto, inscribed in both the Hawaiian and English languages on Founders' Gate at the Mānoa campus is Ma luna ae o nā lāhui a pau ke ola o ke kanaka ("Above all nations is humanity").

The University's governing board includes a current student appointed by the Governor of Hawaii to serve a two-year term as a full voting regent. The practice of appointing a student to the Board was approved by the Hawaii State Legislature in 1997.

Alumni of the University of Hawaii system has many noteable alumni in various walks of life. Senator Daniel Inouye
Daniel Inouye
Daniel Ken "Dan" Inouye is the senior United States Senator from Hawaii, a member of the Democratic Party, and the President pro tempore of the United States Senate making him the highest-ranking Asian American politician in American history. Inouye is the chairman of the United States Senate...
and Tammi Duckworth both are veterans of the US military who were injured during in the line of duty then later entered government service. Bette Midler
Bette Midler
Bette Midler is an American singer, actress, and comedian, also known by her informal stage name, The Divine Miss M. She became famous as a cabaret and concert headliner, and went on to star in successful and acclaimed films such as The Rose, Ruthless People, Beaches, and For The Boys...
and Georgia Engle are successful entertainers on the national stage. President Barack Obama's
Barack Obama
Barack Hussein Obama II is the 44th and current President of the United States. He is the first African American to hold the office. Obama previously served as a United States Senator from Illinois, from January 2005 until he resigned following his victory in the 2008 presidential election.Born in...
parents, Barack Obama, Sr.
Barack Obama, Sr.
Barack Hussein Obama, Sr. was a Kenyan senior governmental economist and the father of U.S. President Barack Obama. He is a central subject in his son's memoir, Dreams from My Father.-Early life:...
, and S. Ann Dunham
Ann Dunham
Stanley Ann Dunham , the mother of Barack Obama, the 44th President of the United States, was an American anthropologist who specialized in economic anthropology and rural development. Dunham was nicknamed Anna, later known as Dr. Stanley Ann Dunham Soetoro, and finally Ann Dunham Sutoro...
, and half-sister, Maya Soetoro-Ng
Maya Soetoro-Ng
Maya Kassandra Soetoro-Ng is the maternal half-sister of Barack Obama, the 44th and current President of the United States. She was previously a high school history teacher and university instructor in Hawaii.-Early life:...
, also earned degrees from the Mānoa campus, where his parents met in a Russian language class. His mother earned three degrees from the University of Hawaii including a Ph. D. in anthropology.

The University of Hawaii system has had many faculty members of note. Many were visiting faculty or came after they won major awards like Nobel Laureate  Dr. Georg von Békésy
Georg von Békésy
Georg von Békésy was a Hungarian biophysicist born in Budapest, Hungary.In 1961, he was awarded the Nobel Prize in Physiology or Medicine for his research on the function of the cochlea in the mammalian hearing organ.-Research:Békésy developed a method for dissecting the inner ear of human...
. Dr. Ryuzo Yanagimachi
Ryuzo Yanagimachi
has made major contributions in understanding the process and mechanism of mammalian fertilization. He is a pioneer of assisted fertilization technologies such as in vitro fertilization and direct sperm injection into egg which are widely used today in human infertility clinics throughout the world...
, principal investigator of the research group that developed a method of cloning from adult animal cells, is still on the faculty.