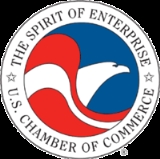 Encyclopedia
The United States Chamber of Commerce (USCC) is an American lobbying
Lobbying
Lobbying is the act of attempting to influence decisions made by officials in the government, most often legislators or members of regulatory agencies. Lobbying is done by various people or groups, from private-sector individuals or corporations, fellow legislators or government officials, or...
group representing the interests of many business
Business
A business is an organization engaged in the trade of goods, services, or both to consumers. Businesses are predominant in capitalist economies, where most of them are privately owned and administered to earn profit to increase the wealth of their owners. Businesses may also be not-for-profit...
es and trade association
Trade association
A trade association, also known as an industry trade group, business association or sector association, is an organization founded and funded by businesses that operate in a specific industry...
s. It is not an agency of the United States government.

More than 90 years later, the Chamber claims a direct membership of 300,000 businesses, and 3 million through its various affiliates such as state and local chambers. Some of the Chamber’s members and donors are Goldman Sachs
Goldman Sachs
The Goldman Sachs Group, Inc. is an American multinational bulge bracket investment banking and securities firm that engages in global investment banking, securities, investment management, and other financial services primarily with institutional clients...
, Chevron
Chevron Corporation
Chevron Corporation is an American multinational energy corporation headquartered in San Ramon, California, United States and active in more than 180 countries. It is engaged in every aspect of the oil, gas, and geothermal energy industries, including exploration and production; refining,...
, Texaco
Texaco
Texaco is the name of an American oil retail brand. Its flagship product is its fuel "Texaco with Techron". It also owns the Havoline motor oil brand....
, and Aegon
AEGON
Aegon N.V. is one of the world’s largest life insurance and pension groups, and a strong provider of investment products. Aegon's head office is in The Hague, Netherlands...
.

The Washington, DC headquarters of the U.S. Chamber of Commerce occupies land that was formerly the home of Daniel Webster
Daniel Webster
Daniel Webster was a leading American statesman and senator from Massachusetts during the period leading up to the Civil War. He first rose to regional prominence through his defense of New England shipping interests...
.

The Chamber's positions include:

The Chamber has emerged as the largest lobbying
Lobbying
Lobbying is the act of attempting to influence decisions made by officials in the government, most often legislators or members of regulatory agencies. Lobbying is done by various people or groups, from private-sector individuals or corporations, fellow legislators or government officials, or...
organization in America. It spent $91.7 million on lobbying in 2008, and $144.5 million in 2009, up from $18.7 million in 2000. The Chamber's lobbying expenditures in 2009 were five times as high as the next highest spender: Exxon Mobil, at $27.4 million. The Chamber had more than 150 lobbyists from 25 different firms working on its behalf in 2009. The major issues that it advocated on were in the categories of torts, government issues, finance, banking and taxes.

As of October 2010, the Chamber had a worldwide network of 115 American Chamber of Commerce affiliates located in 108 countries. The US Chamber says that a “relative handful” of the Chamber’s 300,000 members are “non-U.S.-based (foreign) companies.” It adds that, “No foreign money is used to fund political activities.” A US Chamber executive has said that the organization has had “foreign multinationals” (foreign companies) as members for “over a century, many for decades.” The US Chamber states that it receives approximately $100,000 annually in membership dues from its foreign affiliates.

In the 2008 election cycle, aggressive ads paid for by the USCC attacked a number of Democratic congressional candidates (such as Minnesota's DFL
Minnesota Democratic-Farmer-Labor Party
The Minnesota Democratic–Farmer–Labor Party is a major political party in the state of Minnesota and the state affiliate of the Democratic Party. It was created on April 15, 1944, with the merger of the Minnesota Democratic Party and the Farmer–Labor Party...
Senate candidate Al Franken
Al Franken
Alan Stuart "Al" Franken is the junior United States Senator from Minnesota. He is a member of the Minnesota Democratic-Farmer-Labor Party, which affiliates with the national Democratic Party....
) and supported a number of Republican candidates including John Sununu
John E. Sununu
John Edward Sununu is a former Republican United States Senator from New Hampshire, of Lebanese and Palestinian Christian ancestry. Sununu was the youngest member of the Senate for his entire six year term. He is the son of former New Hampshire Governor John H...
, Gordon Smith, Roger Wicker
Roger Wicker
Roger Frederick Wicker is the junior U.S. Senator from Mississippi and a member of the Republican Party. In December 2007 he was appointed by Governor Haley Barbour to fill the seat vacated by Trent Lott. He subsequently won the 2008 special election for the remainder of the term. Wicker served...
, Saxby Chambliss
Saxby Chambliss
Clarence Saxby Chambliss, Jr. is the senior United States Senator from Georgia. A member of the Republican Party, he previously served as a U.S. Representative ....
and Elizabeth Dole
Elizabeth Dole
Mary Elizabeth Alexander Hanford "Liddy" Dole is an American politician who served in both the Ronald Reagan and George H. W. Bush presidential administrations, as well as a United States Senator....
.

During the 2010 campaign cycle, the Chamber spent $32 million, 93 percent of which was to help Republican candidates. The Chamber's spending out of its general funds was criticized as illegal under campaign finance laws. In a front-page article titled "Large Donations Aid U.S. Chamber in Election Drive", The New York Times
The New York Times
The New York Times is an American daily newspaper founded and continuously published in New York City since 1851. The New York Times has won 106 Pulitzer Prizes, the most of any news organization...
reported that the Chamber used contributions in campaigns without separating foreign and domestic contributions. This is illegal because foreign nations and groups are not allowed to monetarily lobby in the U.S. In question was the Chamber's international branches, “AmChams”, whose funds are unaccounted for and perhaps mix into the general collection. All branches, corporations, and members of the Chamber pay dues; the question is how they divide the money for expenses in national campaigns.

The truth of these allegations is unknown, as neither the Chamber nor its detractors can provide any concrete evidence to support or refute the allegations. In reference to the matter, Tom Donohue wrote his council and members on October 12, 2010. He stated, “Let me be clear. The Chamber does not use any foreign money to fund voter education activities—period. We have strict financial controls in place to ensure this. The funds we receive from American Chambers of Commerce abroad, bilateral business councils, and non-U.S. based global companies represent a small fraction of our more than $200 million annual revenues. Under our accounting system, these revenues are never used to support any political activities. We are in full compliance with all laws and regulations.” Organizations Moveon.org, Think Progress, and People for the American Way
People For the American Way
People For the American Way is a progressive advocacy group in the United States. Under U.S. tax code, People For the American Way is organized as a tax-exempt 501 non-profit organization.-Purpose:...
rallied against the Chamber at the Justice Department
United States Department of Justice
The United States Department of Justice , is the United States federal executive department responsible for the enforcement of the law and administration of justice, equivalent to the justice or interior ministries of other countries.The Department is led by the Attorney General, who is nominated...
to start an injunction for a criminal investigation. As of yet, the Justice Department has not taken any inquiries as a serious legal threat. The Chamber is not required to produce records of its coffers or fundraising.

President Barack Obama
Barack Obama
Barack Hussein Obama II is the 44th and current President of the United States. He is the first African American to hold the office. Obama previously served as a United States Senator from Illinois, from January 2005 until he resigned following his victory in the 2008 presidential election.Born in...
and other legislators asked the IRS and Federal Elections Commission to ensure that the foreign funds that the Chamber receives are not used for political activities. Obama criticized the Chamber for not disclosing its contributors. The Chamber has responded that “No foreign money is used to fund political activities.” After the election, the Chamber reiterated the nature of Obama's policy dictated action from the Chamber, however the conflict would not be made "personal".

The Chamber threatened to sue the Environmental Protection Agency in order to have a hearing on climate science before any federal climate regulation is passed in October 2009. In response to this position, several companies quit the Chamber, including Exelon Corp
Exelon
Exelon Corporation is an electricity generating and distributing company headquartered in the Chase Tower in the Chicago Loop area of Chicago. It was created in October, 2000 by the merger of PECO Energy Company and Unicom, of Philadelphia and Chicago respectively. Unicom owned Commonwealth Edison...
, PG&E Corp
Pacific Gas and Electric Company
The Pacific Gas and Electric Company , commonly known as PG&E, is the utility that provides natural gas and electricity to most of the northern two-thirds of California, from Bakersfield almost to the Oregon border...
, PNM Resources
PNM Resources
PNM Resources is an energy holding company based in the U.S. state of New Mexico. The acronym PNM by itself usually refers to the PNM Resources subsidiary Public Service Company of New Mexico...
, and Apple Inc. Nike, Inc has decided to resign from their board of directors position but to continue their membership. Nike stated that they believe they can better influence the policy by being part of the conversation. In response to an online campaign of Prius owners organized by Moveon.org, Toyota has stated that it is not leaving the Chamber.

Peter Darbee, CEO of former chamber member PG&E (a utility company in California), said, “I'm struck by the irony that, as we try to restore public trust in business on the one hand, on the other the Chamber's behavior on the climate issue only reinforces stereotypes that erode that very same confidence." Hilary Rosen
Hilary Rosen
Hilary Beth Rosen is a partner in the political communications firm, SKDKnickerbocker with offices in DC and New York. Prior to joining SKDK, she was the managing partner of the DC office of the Brunswick Group, a London based PR and communications strategy firm. She joined Brunswick in...
, former CEO of the Recording Industry Association of America
Recording Industry Association of America
The Recording Industry Association of America is a trade organization that represents the recording industry distributors in the United States...
added, "Their aggressive ways are out of step with a new generation of business leadership who are looking for more cooperative relationship with Washington.”

It has been reported that the Chamber has falsely inflated the number of members, claiming that it has 3 million members versus actual membership of 300,000. The Chamber says this is a "misunderstanding of the U.S. Chamber's structure", as the membership of the US Chamber of Commerce is 300,000, but the membership of all of its regional affiliates combined is 3 million.

In November 2009, the Chamber was reported to be seeking to spend $50,000 to hire a "respected economist" to produce a study that could be used to portray health-care legislation as a job killer and threat to the nation's economy.

In December 2009, activist group Velvet Revolution, under the name StopTheChamber, posted a $200,000 reward for "information leading to the arrest and conviction of Chamber of Commerce CEO Tom Donahue".

In 2010 the U.S. Chamber created a page on their web site to respond to controversies that arise.