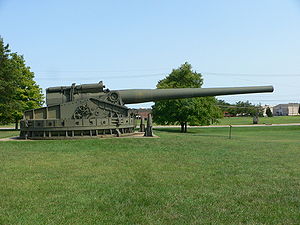 The U.S. Army Ordnance Museum is a museum
Museum
A museum is an institution that cares for a collection of artifacts and other objects of scientific, artistic, cultural, or historical importance and makes them available for public viewing through exhibits that may be permanent or temporary. Most large museums are located in major cities...
that is in the process of being re-located to Fort Lee
Fort Lee
Fort Lee may refer to:* Fort Lee, New Jersey* Battle of Fort Lee was fought on November 19, 1776 between American and British forces.* Fort Lee , a United States Army post...
, in Fort Lee, Virginia
Fort Lee, Virginia
Fort Lee is a census-designated place in Prince George County, Virginia, United States. The population was 7,269 at the 2000 census.Fort Lee is a United States Army post and headquarters of the U.S. Army Combined Arms Support Command / Sustainment Center of Excellence , the U.S. Army Quartermaster...
. Its previous building—at Aberdeen Proving Ground in Aberdeen, Maryland—was closed in September 2010, although many outdoor exhibits are still accessible to the public.

The mission of the U.S. Army Ordnance Museum is to acquire, preserve, and exhibit historically significant equipment, armaments and materiel
Materiel
Materiel is a term used in English to refer to the equipment and supplies in military and commercial supply chain management....
that relates to the history of the U.S. Army Ordnance Corps and to document and present the evolution and development of U.S. military ordnance material dating from the American Colonial Period to present day.

Established in 1919 and officially opened to the public in 1924, to exhibit captured enemy equipment and materiel, the Museum was located in Building 314 of the Aberdeen Proving Ground
Aberdeen Proving Ground
Aberdeen Proving Ground is a United States Army facility located near Aberdeen, Maryland, . Part of the facility is a census-designated place , which had a population of 3,116 at the 2000 census.- History :...
and operated by the U.S. Army until 1967. Co-location with APG provided convenient access to the equipment being delivered to APG for testing after World War I. In 1965 local citizens formed the tax-free Ordnance Museum Foundation, Inc. to establish and operate a museum
Museum
A museum is an institution that cares for a collection of artifacts and other objects of scientific, artistic, cultural, or historical importance and makes them available for public viewing through exhibits that may be permanent or temporary. Most large museums are located in major cities...
of these military artifacts. The Foundation is not affiliated with the U.S. Army, nor the Department of Defense
United States Department of Defense
The United States Department of Defense is the U.S...
. The Foundation began operation of the Museum in the early 1970s, upon opening in Building 2601 on the Aberdeen Proving Ground (until its closing in September 2010) and operates the Ordnance Museum until this day.

As of September 2010, the museum itself (indoors) is closed to all visitors while it is relocated to Fort Lee, but the outdoor displays with the remaining vehicles is open to visitors seven days a week, from 9:00am until 4:45pm. Visitors may request a pass from the Visitor's Center at the Rt. 715 East gate of the Aberdeen Proving Ground. This pass entitles the bearer to drive directly to and from the museum area only. As the display is on an active military base, one needs to have their vehicle's registration (or rental documents). Each adult 16 years and older will need to have a driver's license or picture ID. Children under 16 will not need to have such documentation. Foreign nationals are allowed to visit on a passport.

The outdoor collection features those vehicles and artillery not yet transferred from World War I era forward.

The indoor portion of the Ordnance Museum contains a large collection of firearms, shell
Shell (projectile)
A shell is a payload-carrying projectile, which, as opposed to shot, contains an explosive or other filling, though modern usage sometimes includes large solid projectiles properly termed shot . Solid shot may contain a pyrotechnic compound if a tracer or spotting charge is used...
s, hand grenade
Hand grenade
A hand grenade is any small bomb that can be thrown by hand. Hand grenades are classified into three categories, explosive grenades, chemical and gas grenades. Explosive grenades are the most commonly used in modern warfare, and are designed to detonate after impact or after a set amount of time...
s, cartridges
Cartridge (firearms)
A cartridge, also called a round, packages the bullet, gunpowder and primer into a single metallic case precisely made to fit the firing chamber of a firearm. The primer is a small charge of impact-sensitive chemical that may be located at the center of the case head or at its rim . Electrically...
, and educational displays. Numerous examples of artillery and mortars are on display, as is a 1942 Jeep
Willys MB
The Willys MB US Army Jeep and the Ford GPW, were manufactured from 1941 to 1945. These small four-wheel drive utility vehicles are considered the iconic World War II Jeep, and inspired many similar light utility vehicles. Over the years, the World War II Jeep later evolved into the "CJ" civilian...
and a M5 Stuart tank equipped with the "Rhino" Culin cutter for use in hedgerows.