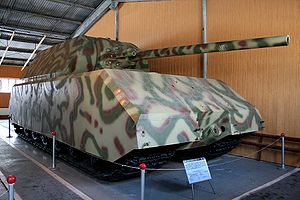 The Kubinka Tank Museum is a large museum
Museum
A museum is an institution that cares for a collection of artifacts and other objects of scientific, artistic, cultural, or historical importance and makes them available for public viewing through exhibits that may be permanent or temporary. Most large museums are located in major cities...
of armoured fighting vehicle
Armoured fighting vehicle
An armoured fighting vehicle is a combat vehicle, protected by strong armour and armed with weapons. AFVs can be wheeled or tracked....
s in Kubinka
Kubinka
Kubinka is a town in Odintsovsky District of Moscow Oblast, Russia, located on the Setun River, west of Moscow. Population: Kubinka was the location of the Soviet Union's tank proving grounds, and today is the home of the Kubinka Tank Museum...
, just outside Moscow
Moscow
Moscow is the capital, the most populous city, and the most populous federal subject of Russia. The city is a major political, economic, cultural, scientific, religious, financial, educational, and transportation centre of Russia and the continent...
. It has many famous tanks from World War I
World War I
World War I , which was predominantly called the World War or the Great War from its occurrence until 1939, and the First World War or World War I thereafter, was a major war centred in Europe that began on 28 July 1914 and lasted until 11 November 1918...
, World War II
World War II
World War II, or the Second World War , was a global conflict lasting from 1939 to 1945, involving most of the world's nations—including all of the great powers—eventually forming two opposing military alliances: the Allies and the Axis...
and the Cold War
Cold War
The Cold War was the continuing state from roughly 1946 to 1991 of political conflict, military tension, proxy wars, and economic competition between the Communist World—primarily the Soviet Union and its satellite states and allies—and the powers of the Western world, primarily the United States...
. The museum also houses many unique vehicles, such as the Panzer VIII Maus
Panzer VIII Maus
Panzerkampfwagen VIII Maus was a German World War II super-heavy tank completed in late 1944. It is the heaviest fully enclosed armoured fighting vehicle ever built. Only two hulls and one turret were completed before the testing grounds were captured by the advancing Soviet forces.These two...
, Troyanov super-heavy tank
Obyekt 279
Object 279 was a Soviet experimental heavy tank developed at the end of 1959.This special purpose tank was intended to fight on cross country terrain, inaccessible to conventional tanks, acting as a heavy breakthrough tank, and if necessary withstanding even the shockwave of a nuclear explosion...
and a Karl-Gerät alongside single production prototypes from Russia and Germany. The museum is derived from the research collection of the Kubinka armour test base, still functioning as such. Most Cold War-era Western tanks are war trophies from Middle East, Africa, Vietnam and Latin America, sent to the armour test facility to test for weaknesses.

The Kubinka Tank Museum is located on a historically "secret" Russian Army
Russian Ground Forces
The Russian Ground Forces are the land forces of the Armed Forces of the Russian Federation, formed from parts of the collapsing Soviet Army in 1992. The formation of these forces posed economic challenges after the collapse of the Soviet Union, and required reforms to professionalize the force...
armour testing reservation, staffed entirely by Russian military personnel, and access is strictly controlled. From August to October 2007 the Museum was closed to foreign visitors by order of the military to implement new anti-espionage
Espionage
Espionage or spying involves an individual obtaining information that is considered secret or confidential without the permission of the holder of the information. Espionage is inherently clandestine, lest the legitimate holder of the information change plans or take other countermeasures once it...
procedures, likely in response to cooling Russia – United States relations following the March 2007 announcement of the US's European ballistic missile defence
Missile defense
Missile defense is a system, weapon, or technology involved in the detection, tracking, interception and destruction of attacking missiles. Originally conceived as a defence against nuclear-armed Intercontinental ballistic missiles , its application has broadened to include shorter-ranged...
program. The new restrictions require that all non-Russians visit only with pre-approved Russian tour groups during certain days and hours, submit a security application 3-4 weeks in advance, pay a special fee for a Federal Security Bureau officer to escort them the entire time they are in the museum, and agree to spend no more than a few minutes in each display area. "Professional" cameras (non-disposable
Disposable camera
The disposable or single-use camera is a simple box camera sold with a roll of film installed, meant to be used once. Most use fixed-focus lenses. Some are equipped with an integrated flash unit, and there are even waterproof versions for underwater photography...
with glass lenses larger than 10mm) or cameras which are easily concealed are also banned.

Although none of the vehicles in the museum are still used or fielded by the Russian military, many of the exhibits (particularly of one-of-a-kind experimental vehicles) are still considered secret by the museum. The website warns that foreign visitors are carefully watched by security cameras and Federal Security agents for evidence of spying. In particular, attempting to sketch or photograph the vehicles in detail for purposes of creating model military vehicle
Model military vehicle
-Scales:The term 'scale' refers to the proportion of actual size the replica or model represents. Scale is usually expressed as a ratio or as a fraction . In either case it conveys the notion that the replica or model is accurately scaled in all visible proportions from a full-size prototype object...
s is considered espionage and will result in arrest.