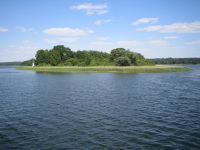 The Ukrani were a West Slavic
West Slavs
The West Slavs are Slavic peoples speaking West Slavic languages. They include Poles , Czechs, Slovaks, Lusatian Sorbs and the historical Polabians. The northern or Lechitic group includes, along with Polish, the extinct Polabian and Pomeranian languages...
Polabian tribe
Polabian Slavs
Polabian Slavs - is a collective term applied to a number of Lechites tribes who lived along the Elbe river, between the Baltic Sea to the north, the Saale and the Limes Saxoniae to the west, the Ore Mountains and the Western Sudetes to the south, and Poland to the east. They have also been known...
in the Uckermark
Uckermark
Uckermark is a Kreis in the northeastern part of Brandenburg, Germany. Neighboring districts are Barnim and Oberhavel, the districts Mecklenburgische Seenplatte and Vorpommern-Greifswald in Mecklenburg-Vorpommern, and to the east Poland . It is the largest district of Germany areawise...
(terra U(c)kera, Uckerland) from the 6th–12th centuries. Their settlement area was centered around the lakes Oberuckersee
Oberuckersee
Oberuckersee is a municipality in the Uckermark district, in Brandenburg, Germany....
and Unteruckersee at the spring of the Uecker
Uecker
The Uecker or Ucker is a river in the northeastern German states of Brandenburg, where it is known as the Ucker, and of Mecklenburg-Vorpommern. Its source lies in the Uckermark district, near the village Alt-Temmen. It flows north through Lake Oberuckersee, Lake Mollensee and Lake Unteruckersee,...
River. In this region, burgh
Burgh
A burgh was an autonomous corporate entity in Scotland and Northern England, usually a town. This type of administrative division existed from the 12th century, when King David I created the first royal burghs. Burgh status was broadly analogous to borough status, found in the rest of the United...
s with a proto-town suburbium were set up at Drense and on an isle in Lake Oberuckersee (near modern Prenzlau
Prenzlau
Prenzlau , a city in the Uckermark District of Brandenburg in Germany, had a population of about 21,000 in 2005.-International relations:Prenzlau is twinned with: Uster, Switzerland Barlinek, Poland Świdwin, Poland...
).

In 954, Margrave
Margrave
A margrave or margravine was a medieval hereditary nobleman with military responsibilities in a border province of a kingdom. Border provinces usually had more exposure to military incursions from the outside, compared to interior provinces, and thus a margrave usually had larger and more active...
Gero
Gero
Gero I , called the Great , ruled an initially modest march centred on Merseburg, which he expanded into a vast territory named after him: the marca Geronis. During the mid-10th century, he was the leader of the Saxon Drang nach Osten.-Succession and early conflicts:Gero was the son of Count...
of the Saxon Eastern March
Saxon Eastern March
The Saxon Eastern March or Ostmark was a march of the Holy Roman Empire from the 10th until the 12th century. The term "eastern march" or "ostmark" comes from the Latin term marchia Orientalis and originally could refer to either a march created on the eastern frontier of the Duchy of Saxony or...
(the marca Geronis
Marca Geronis
The Marca Geronis was a vast super-march in the middle of the tenth century. It was created probably for Thietmar and passed to his two sons consecutively: Siegfried and Gero...
), aided by Holy Roman Emperor
Holy Roman Emperor
The Holy Roman Emperor is a term used by historians to denote a medieval ruler who, as German King, had also received the title of "Emperor of the Romans" from the Pope...
Otto I
Otto I, Holy Roman Emperor
Otto I the Great , son of Henry I the Fowler and Matilda of Ringelheim, was Duke of Saxony, King of Germany, King of Italy, and "the first of the Germans to be called the emperor of Italy" according to Arnulf of Milan...
's son-in-law, Conrad of Lorraine
Conrad, Duke of Lorraine
Conrad the Red was a Duke of Lorraine from the Salian dynasty.He was the son of Werner V, Count of the Nahegau, Speyergau, and Wormsgau. His mother was a sister of Conrad I of Germany. In 941, he succeeded his father in his counties and obtained an additional territory, the Niddagau...
, launched a successful campaign to subdue the Ukrani, who had come in reach of the Holy Roman Empire
Holy Roman Empire
The Holy Roman Empire was a realm that existed from 962 to 1806 in Central Europe.It was ruled by the Holy Roman Emperor. Its character changed during the Middle Ages and the Early Modern period, when the power of the emperor gradually weakened in favour of the princes...
's Northern March
Northern March
The Northern March or North March was created out of the division of the vast Marca Geronis in 965. It initially comprised the northern third of the Marca and was part of the territorial organisation of areas conquered from the Wends...
after the 929 Battle of Lenzen. After the 983 revolt of the Obodrites and Liutizians
Veleti
The Veleti or Wilzi were a group of medieval Lechites tribes within the territory of modern northeastern Germany; see Polabian Slavs. In common with other Slavic groups between the Elbe and Oder Rivers, they were often described by Germanic sources as Wends. In the late 10th century, they were...
, the area became independent again, yet remained under permanent military pressure, especially from Poland and the Holy Roman Empire.