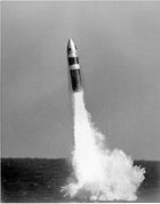 A development study for a longer range version of the Polaris missile achieved by enlarging it to the maximum possible size allowed by existing launch tubes started in 1963. Tests had already shown that Polaris missiles could be operated without problems in launch tubes that had their fiberglass
Fiberglass
Glass fiber is a material consisting of numerous extremely fine fibers of glass.Glassmakers throughout history have experimented with glass fibers, but mass manufacture of glass fiber was only made possible with the invention of finer machine tooling...
liners and locating rings removed.

The project was given the title Polaris B3 in November, but the missile was eventually named Poseidon C3 to emphasize the technical advances over its predecessor. The C3 was the only version of the missile produced, and it was also given the designation UGM-73A.

Slightly longer and considerably wider and heavier than Polaris A3, Poseidon had the same 4600 kilometres (2,483.8 nmi) range, greater payload capacity, improved accuracy, and MIRV capability. Poseidon could deliver up to fourteen W68
W68
The W68 warhead was the warhead used on the UGM-73 Poseidon SLBM missile. It was developed in the late 1960s at Lawrence Livermore National Laboratory.-Specifications:The W68 weighs...
thermonuclear warheads contained in Mark 3 reentry vehicles to multiple targets. The high-re-entry-speed design was intended to counter sprint-type terminal ABM
Anti-ballistic missile
An anti-ballistic missile is a missile designed to counter ballistic missiles .A ballistic missile is used to deliver nuclear, chemical, biological or conventional warheads in a ballistic flight trajectory. The term "anti-ballistic missile" describes any antimissile system designed to counter...
defenses. See Atmospheric re-entry for blunt body theory.

The low-yield warheads were apparently selected to make the weapon unsuitable as a first-strike weapon against hardened targets in the Soviet Union, but could be used in a retaliatory strike against soft target
Soft target
Soft target is a military term referring to unarmored/undefended targets needing to be destroyed. For example, a soft target would be an automobile, a house, or assembly of people while a hard target could be a main battle tank or a well defended installation...
s, or in a pre-emptive strike against unhardened surface targets such as airfields, SAM sites, radar sites and other similar targets, opening a pathway for heavy bomber
Heavy bomber
A heavy bomber is a bomber aircraft of the largest size and load carrying capacity, and usually the longest range.In New START, the term "heavy bomber" is used for two types of bombers:*one with a range greater than 8,000 kilometers...
s. In later years this targeting technique has been demonstrated by the use of cruise missile
Cruise missile
A cruise missile is a guided missile that carries an explosive payload and is propelled, usually by a jet engine, towards a land-based or sea-based target. Cruise missiles are designed to deliver a large warhead over long distances with high accuracy...
s to neutralize airfields, SAM sites etc. in the opening phases of the Gulf War
Gulf War
The Persian Gulf War , commonly referred to as simply the Gulf War, was a war waged by a U.N.-authorized coalition force from 34 nations led by the United States, against Iraq in response to Iraq's invasion and annexation of Kuwait.The war is also known under other names, such as the First Gulf...
.