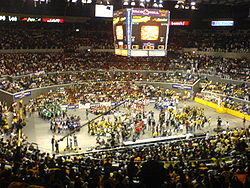 The UAAP Cheerdance Competition is an annual one-day event of the University Athletic Association of the Philippines for cheerleading
Cheerleading
Cheerleading is a physical activity, sometimes a competitive sport, based on organized routines, usually ranging from one to three minutes, which contain the components of tumbling, dance, jumps, cheers, and stunting to direct spectators of events to cheer on sports teams at games or to participate...
. However, it does not count in the tabulation to determine the UAAP Overall Championship.
Studio 23
Studio 23
Studio 23 is a Filipino television network owned by the ABS-CBN Corporation. The network is named for its flagship station in Metro Manila, DWAC-TV, which is carried on UHF channel 23...
received the right to televise the UAAP Men's Basketball. Along with it came the coverage rights of the annual UAAP Cheerdance Competition. The hosts of the event usually start with an audience roll call. After each participating university's name is called, the audience from that school chants their most popular cheer along with their official drummers. However, the dancers of their respective pep squads are not shown to viewers, on site and over live streaming, until their performance. The sequence of the roll call are random and solely the discretion of the hosts or producers. The sequence of the performance are determined by drawing of lots prior the competition.
Since 2006, side-court reporters of each participating universities join the main host of the event. Before the announcement of winners and after all squads have performed, a recap is shown during the telecast. Only the champion and first and second runners-up are announced at the end of the competition. Except in 2008, 2010 and 2011, the host(s) reveal the average scores before announcing the winners.
University of Santo Tomas
University of Santo Tomas
The Pontifical and Royal University of Santo Tomas, The Catholic University of the Philippines , is a private Roman Catholic university run by the Order of Preachers in Manila. Founded on April 28, 1611 by archbishop of Manila Miguel de Benavides, it has the oldest extant university charter in the...
has the most championships (8) followed by University of the Philippines
University of the Philippines
The ' is the national university of the Philippines. Founded in 1908 through Act No...
(7). University of the Philippines
University of the Philippines
The ' is the national university of the Philippines. Founded in 1908 through Act No...
is the current defending champion.
The 2008 Samsung
Samsung
The Samsung Group is a South Korean multinational conglomerate corporation headquartered in Samsung Town, Seoul, South Korea...
UAAP Cheerdance Competition was the most attended UAAP event with a record-breaking 23,443 paying audience.

The University of the Philippines Pep Squad bested the other teams in the 2011 UAAP Cheerdance Competition. It is followed by second placer DLSU Animo Squad, which made a surprising comeback at the podium after 12 years, and third placer, perennial runner-up, Far Eastern University Cheering Squad. Eight-time champion UST Salinggawi Dance Troupe crashed out of the top three once again as it ranked fourth in this year's edition. The remaining teams were ranked as follows: Adamson Pep Squad (5th), National University Pep Squad (6th), Ateneo Blue Babble Battalion (7th), and UE Pep Squad (8th).

For the UAAP Cheerdance Competition 2010 Edition, the University of the Philippines bagged the championship crown gaining four first place marks from the judges. The Far Eastern University placed second with 3 second place and 2 third place marks, while the University of Santo Tomas received 2 second place and 3 third place nods from the board of judges. The following are the scores of the top three teams out of a possible total score of 500 points from 5 judges:

The competition rules has been revised through the years since it began. The following is based on the most recent rules drafted in 2008.

The following are the judges for 2010:

The criteria for judging varies year-on-year. In 2008, the criteria was changed to a more cheerleading-focused point-system giving a maximum score for each element of cheerleading and/or dancing.

Since it was introduced, only three cheerleading organizations have won the cheerdance competition: FEU Cheering Squad, UP Pep Squad, and UST Salinggawi Dance Troupe. Also, since 2000, the year when Nestlé coined the cheerdance in the competition name,
these squads from the three UAAP-members schools have occupied Top 3 spots in most occasions. Since that year, only in four instances that a school has barged into the Top 3 while taking the 1st runner-up award: Adamson University (2001), University of the East (2002), Ateneo de Manila University (2009), and De La Salle University (2011). During those instances, the first runner-up award was taken at the expense of two member-schools: Far Eastern University (2001 and 2002) and University of Santo Tomas (2009 and 2011).

These squads have won the Top 3 spots from 2003 up to 2008, including a three-peat scenario from 2003 to 2005 when UP, UST, and FEU landed as champions, second place, and third place, respectively.

The UST Salinggawi Dance Troupe won the first three years of competition from 1994 to 1996. They did not compete in the 1998 season and instead joined the 1st Lipton Cheering Cup Competition. The rivalry between the two squads began in 1999 when UST returned to reclaim the title after their year of absence. However, they only finished second behind UP Pep Squad. In 2001, UP Pep Squad matched the record of UST's three consecutive wins.

For the 2011 edition, UP maintained its top form and grabbed the top plum, bringing its total number of championships to seven. Trailing UP are the DLSU Animo Squad and the FEU Cheering Squad which were placed second and third respectively - displacing UST again out of the top 3.

UP's most popular cheer is "U-ni-bersidad-ng-Pi-li-pi-nas", which is chanted while the crowd clap their hands in the air. UST's cheer is "Go USTe!", accompanied by the waving of either yellow hotdog balloons or raised right pointing fingers in circular clockwise motion.