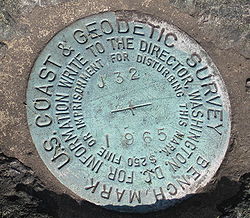 The original predecessor agency of the NGS was the United States Coast Survey, created by Congress in 1807 to conduct a "Survey of the Coast".
This organization represented the Jefferson administration's interest in science and stimulation of international trade. The Jackson administration expanded and extended the coast surveys scope and organization.
Progress moved ahead slowly and haltingly during the first 25 years. Not until August 29, 1811, did F. R. Hassler
Ferdinand Rudolph Hassler
Ferdinand Rudolph Hassler was a surveyor who worked mostly in the United States and also in Switzerland. He headed the United States Coast Survey and the Bureau of Weights and Measures.-Biography:...
sail for Europe
Europe
Europe is, by convention, one of the world's seven continents. Comprising the westernmost peninsula of Eurasia, Europe is generally 'divided' from Asia to its east by the watershed divides of the Ural and Caucasus Mountains, the Ural River, the Caspian and Black Seas, and the waterways connecting...
to purchase the proper instruments. He remained in Europe during the War of 1812
War of 1812
The War of 1812 was a military conflict fought between the forces of the United States of America and those of the British Empire. The Americans declared war in 1812 for several reasons, including trade restrictions because of Britain's ongoing war with France, impressment of American merchant...
, and then he returned to the United States
United States
The United States of America is a federal constitutional republic comprising fifty states and a federal district...
, arriving on August 16, 1815.

Hassler's plan was to employ triangulation to establish his system. Work began in the vicinity of New York City
New York City
New York is the most populous city in the United States and the center of the New York Metropolitan Area, one of the most populous metropolitan areas in the world. New York exerts a significant impact upon global commerce, finance, media, art, fashion, research, technology, education, and...
in 1816. The first baseline was measured and verified in 1817. A further Act of Congress
Act of Congress
An Act of Congress is a statute enacted by government with a legislature named "Congress," such as the United States Congress or the Congress of the Philippines....
in 1818 interfered with Hassler's work. The U.S. Army and U.S. Navy were placed in charge of the survey work. This generated a lull in activity which lasted from 1818 to 1832. The Coast survey existed without a superintendent during the 14 years from 1818 to 1832.

Little work was carried out until another Federal law was enacted on July 10, 1832. It renewed the original law of 1807. Hassler was reappointed as the agency's superintendent, and field work was resumed in April 1833.

Professor Alexander Dallas Bache
Alexander Dallas Bache
Alexander Dallas Bache was an American physicist, scientist and surveyor who erected coastal fortifications and conducted a detailed survey mapping of the United States coastline.-Biography:...
became superintendent of the Survey in 1843. Earlier in his life, he had established the first magnetic observatory. During his years as superintendent, he expanded the Survey southward along the Atlantic coast into the Florida Keys
Florida Keys
The Florida Keys are a coral archipelago in southeast United States. They begin at the southeastern tip of the Florida peninsula, about south of Miami, and extend in a gentle arc south-southwest and then westward to Key West, the westernmost of the inhabited islands, and on to the uninhabited Dry...
. He instituted regular and systematic observations of the tides and the Gulf Stream
Gulf Stream
The Gulf Stream, together with its northern extension towards Europe, the North Atlantic Drift, is a powerful, warm, and swift Atlantic ocean current that originates at the tip of Florida, and follows the eastern coastlines of the United States and Newfoundland before crossing the Atlantic Ocean...
, and investigated magnetic forces and directions.

During the nineteenth century, the remit of the Survey was rather loosely drawn and it had no competitors in federally funded scientific research. Various Superintendents developed its work in fields as diverse as astronomy
Astronomy
Astronomy is a natural science that deals with the study of celestial objects and phenomena that originate outside the atmosphere of Earth...
, cartography
Cartography
Cartography is the study and practice of making maps. Combining science, aesthetics, and technique, cartography builds on the premise that reality can be modeled in ways that communicate spatial information effectively.The fundamental problems of traditional cartography are to:*Set the map's...
, meteorology
Meteorology
Meteorology is the interdisciplinary scientific study of the atmosphere. Studies in the field stretch back millennia, though significant progress in meteorology did not occur until the 18th century. The 19th century saw breakthroughs occur after observing networks developed across several countries...
, geodesy
Geodesy
Geodesy , also named geodetics, a branch of earth sciences, is the scientific discipline that deals with the measurement and representation of the Earth, including its gravitational field, in a three-dimensional time-varying space. Geodesists also study geodynamical phenomena such as crustal...
, geology
Geology
Geology is the science comprising the study of solid Earth, the rocks of which it is composed, and the processes by which it evolves. Geology gives insight into the history of the Earth, as it provides the primary evidence for plate tectonics, the evolutionary history of life, and past climates...
, geophysics
Geophysics
Geophysics is the physics of the Earth and its environment in space; also the study of the Earth using quantitative physical methods. The term geophysics sometimes refers only to the geological applications: Earth's shape; its gravitational and magnetic fields; its internal structure and...
, hydrography
Hydrography
Hydrography is the measurement of the depths, the tides and currents of a body of water and establishment of the sea, river or lake bed topography and morphology. Normally and historically for the purpose of charting a body of water for the safe navigation of shipping...
, navigation
Navigation
Navigation is the process of monitoring and controlling the movement of a craft or vehicle from one place to another. It is also the term of art used for the specialized knowledge used by navigators to perform navigation tasks...
, oceanography
Oceanography
Oceanography , also called oceanology or marine science, is the branch of Earth science that studies the ocean...
, exploration
Exploration
Exploration is the act of searching or traveling around a terrain for the purpose of discovery of resources or information. Exploration occurs in all non-sessile animal species, including humans...
, pilotage
Pilotage
Pilotage is the use of fixed visual references on the ground or sea by means of sight or radar to guide oneself to a destination, sometimes with the help of a map or nautical chart. People use pilotage for activities such as guiding vessels and aircraft, hiking and Scuba diving...
, tides and topography
Topography
Topography is the study of Earth's surface shape and features or those ofplanets, moons, and asteroids...
. The Survey published important articles by Charles Sanders Peirce on the design of experiments and on a criterion
Peirce's criterion
In robust statistics, Peirce's criterion is a rule for eliminating outliers from data sets, which was devised by Benjamin Peirce.-The problem of outliers:...
for the statistical treatment of outlier
Outlier
In statistics, an outlier is an observation that is numerically distant from the rest of the data. Grubbs defined an outlier as: An outlying observation, or outlier, is one that appears to deviate markedly from other members of the sample in which it occurs....
s. For example, from 1836 until the establishment of the National Bureau of Standards
National Institute of Standards and Technology
The National Institute of Standards and Technology , known between 1901 and 1988 as the National Bureau of Standards , is a measurement standards laboratory, otherwise known as a National Metrological Institute , which is a non-regulatory agency of the United States Department of Commerce...
in 1901, the Survey was responsible for weights and measures throughout the United States.

The outbreak of the American Civil War
American Civil War
The American Civil War was a civil war fought in the United States of America. In response to the election of Abraham Lincoln as President of the United States, 11 southern slave states declared their secession from the United States and formed the Confederate States of America ; the other 25...
caused a dramatic shift in direction for the Coast Survey. Since most men of the survey had Union
Union (American Civil War)
During the American Civil War, the Union was a name used to refer to the federal government of the United States, which was supported by the twenty free states and five border slave states. It was opposed by 11 southern slave states that had declared a secession to join together to form the...
sympathies, their work shifted emphasis to support of the United States Navy. One of the individuals who excelled at this work was Joseph Smith Harris
Joseph Smith Harris
Joseph Smith Harris was an American surveyor, civil engineer, and railroad executive. Largely self-taught, he worked on several projects for the U.S. government, including the Coast Survey of the Mississippi Sound in 1854–56 and the Northwest Boundary Survey of 1857–61...
, who supported Admiral David G. Farragut and his Western Gulf Blockading Squadron in the Battle of Forts Jackson and St. Philip
Battle of Forts Jackson and St. Philip
The Battle of Forts Jackson and St. Philip was the decisive battle for possession of New Orleans in the American Civil War. The two Confederate forts on the Mississippi River south of the city were attacked by a Union Navy fleet...
. This survey work was particularly valuable to Commander
Commander
Commander is a naval rank which is also sometimes used as a military title depending on the individual customs of a given military service. Commander is also used as a rank or title in some organizations outside of the armed forces, particularly in police and law enforcement.-Commander as a naval...
David Dixon Porter
David Dixon Porter
David Dixon Porter was a member of one of the most distinguished families in the history of the United States Navy. Promoted as the second man to the rank of admiral, after his adoptive brother David G...
and his mortar bombardment fleet.

As the American continent was progressively explored, inhabited, and enclosed, the bureau took responsibility for survey of the interior. By 1871, Congress expanded its responsibilities to include geodetic surveys in the interior of the country and the name of the agency was changed in 1878 to the U.S. Coast and Geodetic Survey (C&GS). 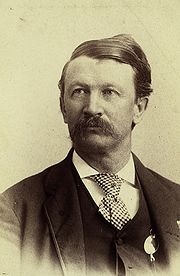 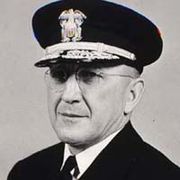 
Superintendents of Weights and Measures

The Coast and Geodetic Survey was authorized its own flag on January 16, 1899. The flag, which remained in use until the Survey became a part of NOAA in 1970, was blue, with a central white circle and a red triangle centered within the circle. It was intended to symbolize the triangulation
Triangulation
In trigonometry and geometry, triangulation is the process of determining the location of a point by measuring angles to it from known points at either end of a fixed baseline, rather than measuring distances to the point directly...
method used in surveying
Surveying
See Also: Public Land Survey SystemSurveying or land surveying is the technique, profession, and science of accurately determining the terrestrial or three-dimensional position of points and the distances and angles between them...
. The flag was flown by ships in commission with the Coast and Geodetic Survey at the highest point on the forwardmost mast, and served as a distinguishing mark of the Survey as a separate seagoing service from the Navy, with which the Survey shared a common ensign
Ensign
An ensign is a national flag when used at sea, in vexillology, or a distinguishing token, emblem, or badge, such as a symbol of office in heraldry...
.

The NOAA service flag, in use today, was adapted from the Coast and Geodetic Survey flag by adding the NOAA emblem—a circle divided into two parts by the white silhouette of a flying seabird, with the roughly triangular portion above the bird being dark blue and the portion below it a lighter blue—to the center of the old Survey flag. The NOAA symbol lies entirely within the red triangle.