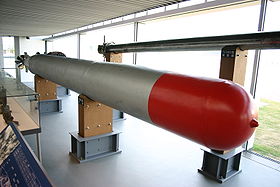 The Type 95 torpedo was a torpedo
Torpedo
The modern torpedo is a self-propelled missile weapon with an explosive warhead, launched above or below the water surface, propelled underwater towards a target, and designed to detonate either on contact with it or in proximity to it.The term torpedo was originally employed for...
of the Imperial Japanese Navy
Imperial Japanese Navy
The Imperial Japanese Navy was the navy of the Empire of Japan from 1869 until 1947, when it was dissolved following Japan's constitutional renunciation of the use of force as a means of settling international disputes...
.

It was based on the formidable Type 93 torpedo
Type 93 torpedo
The Type 93 was a -diameter torpedo of the Imperial Japanese Navy , launched from surface ships. It is commonly referred to as the Long Lance by most modern English-language naval historians, a nickname given it after the war by Samuel E. Morison, the chief historian of the U.S...
(Long Lance) but had a smaller 405 kg (892.9 lb) (Or for the mod 2: 550 kg (1,212.5 lb)) warhead, shorter range and a smaller diameter. It was intended to be fired from a standard 533 mm (21 in) torpedo tube
Torpedo tube
A torpedo tube is a device for launching torpedoes. There are two main types of torpedo tube: underwater tubes fitted to submarines and some surface ships, and deck-mounted units installed aboard surface vessels...
of a submerged submarine
Submarine
A submarine is a watercraft capable of independent operation below the surface of the water. It differs from a submersible, which has more limited underwater capability...
.

The Type 95 was the fastest torpedo in common use by any navy at the time. Its warhead size was the largest of any submarine torpedo, and second only to the Type 93 used by Japanese surface ships. Its engine was a Kerosene
Kerosene
Kerosene, sometimes spelled kerosine in scientific and industrial usage, also known as paraffin or paraffin oil in the United Kingdom, Hong Kong, Ireland and South Africa, is a combustible hydrocarbon liquid. The name is derived from Greek keros...
-oxygen
Oxygen
Oxygen is the element with atomic number 8 and represented by the symbol O. Its name derives from the Greek roots ὀξύς and -γενής , because at the time of naming, it was mistakenly thought that all acids required oxygen in their composition...
wet-heater rather than the compressed air used by most torpedo types at the time. It is regarded as one of the finest torpedoes of the Second World War.