It is not known whether Bahrain was part of the Seleucid Empire
Seleucid Empire
The Seleucid Empire was a Greek-Macedonian state that was created out of the eastern conquests of Alexander the Great. At the height of its power, it included central Anatolia, the Levant, Mesopotamia, Persia, today's Turkmenistan, Pamir and parts of Pakistan.The Seleucid Empire was a major centre...
, although the archaeological site at Qalat Al Bahrain has been proposed as a Seleucid base in the Persian Gulf. Alexander had planned to settle the eastern shores of the Persian Gulf with Greek colonists, and although it is not clear that this happened on the scale he envisaged, Tylos was very much part of the Hellenised world: the language of the upper classes was Greek (although Aramaic was in everyday use), while Zeus was worshipped in the form of the Arabian sun-god Shams. Tylos even became the site of Greek athletic contests.

The name Tylos is thought to be a Hellenisation of the Semitic, Tilmun (from Dilmun
Dilmun
Dilmun or Telmun is a land mentioned by Mesopotamian civilizations as a trade partner, a source of the metal copper, and an entrepôt of the Mesopotamia-to-Indus Valley Civilization trade route...
). The term Tylos was commonly used for the islands until Ptolemy’s
Ptolemy
Claudius Ptolemy , was a Roman citizen of Egypt who wrote in Greek. He was a mathematician, astronomer, geographer, astrologer, and poet of a single epigram in the Greek Anthology. He lived in Egypt under Roman rule, and is believed to have been born in the town of Ptolemais Hermiou in the...
Geographia
Geographia (Ptolemy)
The Geography is Ptolemy's main work besides the Almagest...
when the inhabitants are referred to as 'Thilouanoi'. Some place names in Bahrain go back to the Tylos era, for instance, the residential suburb of Arad in Muharraq
Muharraq
Muharraq , is Bahrain's third largest city, and served as its capital until 1923. The city is located on Muharraq Island and has long been a centre of religiosity...
, is believed to originate from "Arados", the ancient Greek name for Muharraq island.

The ancient Greeks speculated as to whether the Phoenicians were originally from Tylos. According to the 19th century German classicist, Arnold Heeren: “In the Greek geographers, for instance, we read of two islands, named Tyrus or Tylos, and Aradus, which boased that they were the mother country of the Phoenicians, and exhibited relics of Phoenician temples.” The people of Tyre in particular have long maintained Persian Gulf origins, and the similarity in the words “Tylos” and “Tyre” has been commented upon.

With the waning of Seleucid Greek power, Tylos was incorporated into Characene
Characene
Characene, also known as Mesene , was a kingdom within the Parthian Empire at the head of the Persian Gulf. Its capital was Charax Spasinou, "The Fort of Hyspaosines"...
or Mesenian, the state founded in what today is Kuwait
Kuwait
The State of Kuwait is a sovereign Arab state situated in the north-east of the Arabian Peninsula in Western Asia. It is bordered by Saudi Arabia to the south at Khafji, and Iraq to the north at Basra. It lies on the north-western shore of the Persian Gulf. The name Kuwait is derived from the...
by Hyspaosines
Hyspaosines
Hyspaosines or Aspasine was a satrap installed by Antiochus IV Epiphanes and later the first king of Characene or Mesene . Hyspaosines is mainly known from coins, but also appears in texts of cuneiform script...
in 127BC. A building inscriptions found in Bahrain indicate that Hyspoasines occupied the islands, (and it also mention his wife, Thalassia).
From the third century BC to arrival of Islam in the seventh AD, Bahrain was controlled by two other Iranian dynasties of Parthians and Sassanids.

By about 250 BC, Seleucids lost their tritories to Parthia
Parthia
Parthia is a region of north-eastern Iran, best known for having been the political and cultural base of the Arsacid dynasty, rulers of the Parthian Empire....
ns, an Iranian tribe from Central Asia
Central Asia
Central Asia is a core region of the Asian continent from the Caspian Sea in the west, China in the east, Afghanistan in the south, and Russia in the north...
. Parthian dynasty brought the Persian Gulf under their control and extended their influence as far as Oman. Because they needed to control the Persian Gulf trade route, the Parthians established garrisons in the southern coast of Persian Gulf. 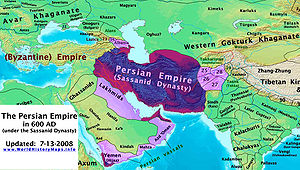 In the third century AD, the Sasanids succeeded the Parthians and held area until the rise of Islam four centuries later. Ardashir, the first ruler of Iranian Sassanians dynasty marched forward Oman and Bahrain and defeat Sanatruq (or Satiran), probably the Parthia
Parthia
Parthia is a region of north-eastern Iran, best known for having been the political and cultural base of the Arsacid dynasty, rulers of the Parthian Empire....
n governor of Bahrain. He appointed his son Shapur I
Shapur I
Shapur I or also known as Shapur I the Great was the second Sassanid King of the Second Persian Empire. The dates of his reign are commonly given as 240/42 - 270/72, but it is likely that he also reigned as co-regent prior to his father's death in 242 .-Early years:Shapur was the son of Ardashir I...
as governor of Bahrain. Shapur constructed a new city there and named it Batan Ardashir after his father. At this time, Bahrain incorporated in the southern Sassanid province covering over the Persian Gulfs southern shore plus the archipelago of Bahrain. The southern province of Sasanids was subdivided into three districts of Haggar (Now al-Hafuf province, Saudi Arabia), Batan Ardashir( Now al-Qatif province, Saudi Arabia), and Mishmahig (Now Bahrain Island) (In Middle-Persian/Pahlavi means "ewe-fish".) included the Bahrain archipelago which earlier called Aval
Awal
Awal is the ancient name of Bahrain, an island country in the Persian Gulf. The name Awal had remained in use, probably for eight centuries. Awal was derived from the name of a god that used to be worshiped by the inhabitants of the islands before the advent of Islam. Awal resembled the head of an...
, but later, in the Islamic era, became known as Bahrain. The name 'ewe-fish' would appear to suggest that the name /Tulos/ is related to Hebrew /ṭāleh/ 'lamb' (Strong's 2924).

By the fifth century Bahrain was a centre for Nestorian Christianity, with Samahij the seat of bishops. In 410, according to the Oriental Syriac Church synodal records, a bishop named Batai was excommunicated from the church in Bahrain. It was also the site Bahrain of worship of a shark deity called Awal
Awal
Awal is the ancient name of Bahrain, an island country in the Persian Gulf. The name Awal had remained in use, probably for eight centuries. Awal was derived from the name of a god that used to be worshiped by the inhabitants of the islands before the advent of Islam. Awal resembled the head of an...
. Worshippers reputedly built a large statue to Awal in Muharraq, although it has now been lost, and for many centuries after Tylos, the islands of Bahrain were known as ‘Awal’.
The source of this article is wikipedia, the free encyclopedia.  The text of this article is licensed under the GFDL.