The Twelve Collegia, or Twelve Colleges is the largest edifice from the Petrine era
Petrine Baroque
Petrine Baroque is a name applied by art historians to a style of Baroque architecture and decoration favoured by Peter the Great and employed to design buildings in the newly-founded Russian capital, Saint Petersburg, under this monarch and his immediate successors.Unlike contemporaneous Naryshkin...
still extant in Saint Petersburg
Saint Petersburg
Saint Petersburg is a city and a federal subject of Russia located on the Neva River at the head of the Gulf of Finland on the Baltic Sea...
. It was designed by Domenico Trezzini
Domenico Trezzini
Domenico Trezzini was a Swiss Italian architect who elaborated the Petrine Baroque style of Russian architecture.Domenico was born in Astano, near Lugano, in the Italian-speaking Ticino . He probably studied in Rome...
and Theodor Schwertfeger and built from 1722 to 1744.

The three-storey, red-brick complex of 12 buildings is 400–440 meters long, giving an illusion of one enormous edifice. The result is an "austerely structured" complex with a "rustic style." The original design separated the 12 individual buildings. In subsequent restructuring, they would be connected to form the modern complex.

The Twelve Collegia was commissioned by Peter the Great, who wanted a place for the Russian government, at the time divided into 12 branches: 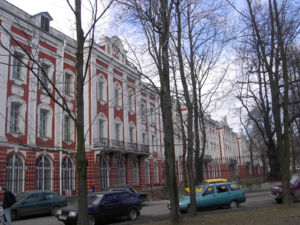