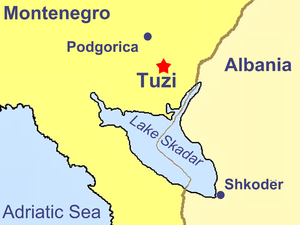 Tuzi (Albanian
Albanian language
Albanian is an Indo-European language spoken by approximately 7.6 million people, primarily in Albania and Kosovo but also in other areas of the Balkans in which there is an Albanian population, including western Macedonia, southern Montenegro, southern Serbia and northwestern Greece...
, Montenegrin
Montenegrin language
Montenegrin is a name used for the Serbo-Croatian language as spoken by Montenegrins; it also refers to an incipient standardized form of the Shtokavian dialect of Serbo-Croatian used as the official language of Montenegro...
: Tuzi, tǔːzi)is a town in the Podgorica
Podgorica
Podgorica , is the capital and largest city of Montenegro.Podgorica's favourable position at the confluence of the Ribnica and Morača rivers and the meeting point of the fertile Zeta Plain and Bjelopavlići Valley has encouraged settlement...
municipality, Montenegro
Montenegro
Montenegro Montenegrin: Crna Gora Црна Гора , meaning "Black Mountain") is a country located in Southeastern Europe. It has a coast on the Adriatic Sea to the south-west and is bordered by Croatia to the west, Bosnia and Herzegovina to the northwest, Serbia to the northeast and Albania to the...
, located along a main road between the city of Podgorica and the Albania
Albania
Albania , officially known as the Republic of Albania , is a country in Southeastern Europe, in the Balkans region. It is bordered by Montenegro to the northwest, Kosovo to the northeast, the Republic of Macedonia to the east and Greece to the south and southeast. It has a coast on the Adriatic Sea...
n border crossing, just a few kilometers north of Lake Skadar. The exact location of Tuzi is 42°21′56"N 19°19′53"E. It a centre of Tuzi urban municipality, a subdivision of Podgorica municipality.

Although there is no historical record for the name "Tuzi", locals say it owes it name to its founder and first settler, Llesh Tuzi. He was said to have lived in the 15th century and migrated from the Albanian Highlands (Malesia e Madhe).

The town of Tuzi is situated in the region of Malesija. It is the largest and most important town in the region. The Albanians of Tuzi today are originally from the surrounding Malësia
Malësia
Malësia or Malësia e Madhe, is a historical geographical region in northern Albania and eastern Montenegro. It consists of an area of land that stretches from the southeast of Podgorica to northern shores of Lake Scutari, and includes much of the Malësi e Madhe District of Albania...
region tribes of Hoti
Hoti
Hoti in Pukhto pronounced as Oothay is a Union council in Mardan District of Khyber-Pakhtunkhwa. The town is located 34°12'0N° 72°4'0E with an altitude of 284 metres and lies just west of Peshawar - the capital of the province and is inhabited by the Kamalzai Pashtuns, a sub-tribe of the...
, Gruda
Gruda
Grudë is a region within Malësia in southern Montenegro. Grudë lies just north of Lake Skadar and includes the small city of Tuzi, the major urban center of Malësia.-Religion:...
, Triesh
Triesh
Triesh is one of the seven Albanian tribes of Malësi e Madhe. Today, around 400 descendants of the tribe live in the small but active tribal sub-region. Trieshi, as well as Hot, derive from a single ancestor named Keq Preka...
and Koja
Koja
Koja may refer to:*Kathe Koja, an American writer*Koja, a subdistrict of North Jakarta*Koja e Kuçit, Albanian Catholic Tribe of Malsia e Madhe...
. The Malësor Albanians consider Tuzi as an important cultural and traditional center for their people. Although Tuzi is historically an Albanian town, it is also home to smaller ethnic groups, such as the Bosniaks (Muslims) and Montenegrins.

In 1911, for the first time since the era of George Kastrioti, the Albanian flag was risen on top of the Deçiq Mountain in Tuz during the Beteja e Deçiq (Battle of Deçiq). In the battle, Ded Gjo Luli
Ded Gjo Luli
Ded Gjo Luli formally known as Dedë Gjon Luli Dedvukaj , was born in Traboin-Hoti . He hails from the tribe of Hot located in the region of Malësia...
led the Albanians into victory against the Ottomans which marked the beginning of the turning point for Albanian liberty and eventually independence.

Tuzi is situated to the northwest of the Shkodër Lake 10 km from Podgorica, 150 km from Dubrovnik (Croatia) and 130 km to Tirana (Albanian Capital).

Tuzi is located in surrounded by forests and mountains that are further connected with the Prokletije. As in all cities in Montenegro, Tuzi has a health centre, elementary school "Mahmut Lekić" and high school "25 Maj". KIC 'TUZI', was built in 2004. In the last few years, Tuzi built a new elementary school and football stadium.

Apart from Tuzi, the Urban Municipality of Tuzi contains the following villages.


Tuzi is the center town of the Albanian tribal region of Malesija. Majority of Tuzi's residents are Albanian and were home to a few notable Albanian figures, such as Dede Gjon Luli, who led the Albanian revolt in Tuzi against the Ottomans in 1911.

There are carnivals that have brought Tuzi to some international carnival cities. There is an ethnographic museum band also many places and cultural valuables to be explored.

Tuzi has 3,900 residents, according to 2003 census, and the Urban Municipality itself has 9,950 residents. Out of this, most are Albanians, but there is also a significant percentage of Muslims Montenegrins, Bosniaks, and Orthodox Montenegrins. As a town centre, Tuzi has 3,900 inhabitants. The municipality of Tuzi has about 11,000 inhabitants. The majority of the population are Albanians (Roman Catholic and Islam
Islam
Islam . The most common are and .   : Arabic pronunciation varies regionally. The first vowel ranges from ~~. The second vowel ranges from ~~~...
religions).