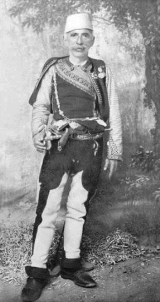 Ded is most known for starting the revolution for the Albanians, which eventually led to later actions by Luigj Gurakuqi
Luigj Gurakuqi
Luigj Gurakuqi was an Albanian writer and politician. He was an important figure of the Albanian National Awakening and was honoured with the People's Hero of Albania medal.- Life :...
, Ismail Qemali
Ismail Qemali
Ismail Qemal Bej Vlora or commonly Ismail Qemali and in Turkish İsmail Kemal Bey or İsmail Kemal Vlora , was a distinguished leader of the Albanian national movement, founder of the modern Albanian state and its first head of state and government.-Life:He was born in Avlonya to a noble family...
, and Isa Boletini
Isa Boletini
Isa Boletini was an Albanian nationalist figure and guerilla fighter, born in the village of Boletin near Mitroviça, Ottoman Empire...
. Dedvukaj was the chief commander of the Malësia army during the Albanian Revolt of 1911
Albanian Revolt of 1911
The Albanian Revolt of 1911 or the Malissori Uprising of 1911 was one of many Albanian revolts in the Ottoman Empire and lasted from March 24, 1911 until August 4, 1911 in the region of Malësia.- Background :...
. He fought in The Battle of Deciq
Battle of Deçiq
The Battle of Deçiq marked the beginning of the turning point for Albanian liberty. It was in this battle that the Flag of Albania was raised for the first time after 442 years of Ottoman occupation...
where he successfully defeated the "young turks". At the conclusion of The Battle of Deciq, the Flag of Albania was raised for the first time after 442 years of occupation on the nearby mountain of Bratile. This was the first time that Albanians had raised their flag in an Albanian settlement since the Castle of Shkodër had fallen in 1479.

In Tirana
Tirana
Tirana is the capital and the largest city of Albania. Modern Tirana was founded as an Ottoman town in 1614 by Sulejman Bargjini, a local ruler from Mullet, although the area has been continuously inhabited since antiquity. Tirana became Albania's capital city in 1920 and has a population of over...
, Albania
Albania
Albania , officially known as the Republic of Albania , is a country in Southeastern Europe, in the Balkans region. It is bordered by Montenegro to the northwest, Kosovo to the northeast, the Republic of Macedonia to the east and Greece to the south and southeast. It has a coast on the Adriatic Sea...
's capital city, there is a street named in his honor called "Rruga Ded Gjo Luli". In the village of Bardhaj in Hot, the rubble of his house, that was left in ruins after the war, was converted into a museum which represents his life as a hero to the Albanian people.