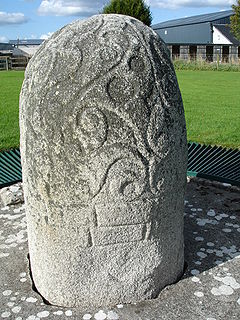 The Turoe stone is a granite
Granite
Granite is a common and widely occurring type of intrusive, felsic, igneous rock. Granite usually has a medium- to coarse-grained texture. Occasionally some individual crystals are larger than the groundmass, in which case the texture is known as porphyritic. A granitic rock with a porphyritic...
stone decorated in a Celtic
Celtic art
Celtic art is the art associated with the peoples known as Celts; those who spoke the Celtic languages in Europe from pre-history through to the modern period, as well as the art of ancient peoples whose language is uncertain, but have cultural and stylistic similarities with speakers of Celtic...
style located in the village of Bullaun
Bullaun, County Galway
Bullaun is a village in east County Galway, Ireland. It lies 6 km northeast of Loughrea on the R350 regional road. It shares its parish with a village called New Inn....
, County Galway
County Galway
County Galway is a county in Ireland. It is located in the West Region and is also part of the province of Connacht. It is named after the city of Galway. Galway County Council is the local authority for the county. There are several strongly Irish-speaking areas in the west of the county...
, Ireland
Republic of Ireland
Ireland , described as the Republic of Ireland , is a sovereign state in Europe occupying approximately five-sixths of the island of the same name. Its capital is Dublin. Ireland, which had a population of 4.58 million in 2011, is a constitutional republic governed as a parliamentary democracy,...
, 6 km north of Loughrea
Loughrea
Loughrea is a town in County Galway, Ireland. The town lies north of a range of wooded hills, the Slieve Aughty Mountains.The town expanded in recent years as it increasingly becomes a commuter town for the city of Galway.- Name :...
off the R350
R350 road
File:R350road.jpg|thumb|290px|Sign on the R350 regional road poly 592 804 564 884 576 960 952 964 960 896 1008 900 1020 820 Attymonpoly 468 1100 444 1168 452 1232 816 1236 832 1172 1004 1180 1024 1096 460 1092 Athenry...
regional road
Regional road
A regional road in Ireland is a class of road not forming a major route , but nevertheless forming a link in the national route network. There are over 11,600 kilometres of regional roads. Regional roads are numbered with three digit route numbers, prefixed by "R" A regional road in Ireland is a...
. The stone is now positioned on the lawn in front of Turoe House, set in a concrete base and metal cattle grill.

The top half of the stone is covered with a continuous abstract La Tène style design similar to that on the Castlestrange stone
Castlestrange stone
The Castlestrange stone is located in the grounds of "Castlestrange House" near Athleague in County Roscommon. It is a granite boulder decorated with flowing spirals in the La Tène style, dating from the Iron Age period between 500 BC and 100 AD....
in County Roscommon
County Roscommon
County Roscommon is a county in Ireland. It is located in the West Region and is also part of the province of Connacht. It is named after the town of Roscommon. Roscommon County Council is the local authority for the county...
. Concentric spirals are carved in low relief to the depth of about 3 cm. Some claim that the carvings on the stone, were they spread out on a flat surface, would equate to a primitive globe map. Alternatively it is seen as a phallus
Phallus
A phallus is an erect penis, a penis-shaped object such as a dildo, or a mimetic image of an erect penis. Any object that symbolically resembles a penis may also be referred to as a phallus; however, such objects are more often referred to as being phallic...
, the band below the glans
Glans penis
The glans penis is the sensitive bulbous structure at the distal end of the penis. The glans penis is anatomically homologous to the clitoral glans of the female...
representing the rolled foreskin, and the spirals possibly semen
Semen
Semen is an organic fluid, also known as seminal fluid, that may contain spermatozoa. It is secreted by the gonads and other sexual organs of male or hermaphroditic animals and can fertilize female ova...
. The stone is 3 ft tall and somewhat phallic in shape.

It was for centuries a curiosity at a lios, or fairy fort, some 3 km from Bullaun, but was moved to the present location at Turoe Farm, in the late 19th century. It was probably saved from vandalism or worse, but the historic provenance has been destroyed. Many historians believe that the stone was carved in France, brought to Ireland in Celtic times and ultimately, like some family heirloom, moved further west, far from the prying eyes of the invaders. The religious or ceremonial purposes of the stone are lost in time.

George Coffey
George Coffey
George Coffey was a scholar of Irish history and cultural revivalist.Coffey was a bookbinder, archaeologist, and the first keeper of antiquities at the National Museum of Ireland...
, in his 1904 paper for the Royal Irish Academy
Royal Irish Academy
The Royal Irish Academy , based in Dublin, is an all-Ireland, independent, academic body that promotes study and excellence in the sciences, humanities and social sciences. It is one of Ireland's premier learned societies and cultural institutions and currently has around 420 Members, elected in...
on the subject of La Tène art, said that the stone had been moved in the 1850s from the rath
Ringfort
Ringforts are circular fortified settlements that were mostly built during the Iron Age , although some were built as late as the Early Middle Ages . They are found in Northern Europe, especially in Ireland...
of Feerwore site.

In 2007, a proposal to remove the Turoe Stone from its location near Loughrea due to concerns that the stone is becoming increasingly vulnerable to the elements, met fierce local opposition.

The stone was originally outside the rath of Feerwore, in Bullaun townland. Excavation yielded much material suggesting that an open site dating to the late centuries BC had been later enclosed.