Ozone
Ozone
Ozone , or trioxygen, is a triatomic molecule, consisting of three oxygen atoms. It is an allotrope of oxygen that is much less stable than the diatomic allotrope...
(O3) is a constituent of the troposphere
Troposphere
The troposphere is the lowest portion of Earth's atmosphere. It contains approximately 80% of the atmosphere's mass and 99% of its water vapor and aerosols....
(it is also an important constituent of certain regions of the stratosphere
Stratosphere
The stratosphere is the second major layer of Earth's atmosphere, just above the troposphere, and below the mesosphere. It is stratified in temperature, with warmer layers higher up and cooler layers farther down. This is in contrast to the troposphere near the Earth's surface, which is cooler...
commonly known as the Ozone layer
Ozone layer
The ozone layer is a layer in Earth's atmosphere which contains relatively high concentrations of ozone . This layer absorbs 97–99% of the Sun's high frequency ultraviolet light, which is potentially damaging to the life forms on Earth...
). Photochemical and chemical reactions involving it drive many of the chemical processes that occur in the atmosphere by day and by night. At abnormally high concentrations brought about by human activities (largely incomplete combustion of fossil fuels, such as gasoline, diesel, etc.), it is a pollutant
Pollutant
A pollutant is a waste material that pollutes air, water or soil, and is the cause of pollution.Three factors determine the severity of a pollutant: its chemical nature, its concentration and its persistence. Some pollutants are biodegradable and therefore will not persist in the environment in the...
, and a constituent of smog
Smog
Smog is a type of air pollution; the word "smog" is a portmanteau of smoke and fog. Modern smog is a type of air pollution derived from vehicular emission from internal combustion engines and industrial fumes that react in the atmosphere with sunlight to form secondary pollutants that also combine...
. Many highly energetic reactions produce it, ranging from combustion to photocopying. Often laser printers will have a smell of ozone, which in high concentrations is toxic. Ozone is a powerful oxidizing agent
Oxidizing agent
An oxidizing agent can be defined as a substance that removes electrons from another reactant in a redox chemical reaction...
readily reacting with other chemical compounds to make many possibly toxic oxides.

Tropospheric ozone is a greenhouse gas
Greenhouse gas
A greenhouse gas is a gas in an atmosphere that absorbs and emits radiation within the thermal infrared range. This process is the fundamental cause of the greenhouse effect. The primary greenhouse gases in the Earth's atmosphere are water vapor, carbon dioxide, methane, nitrous oxide, and ozone...
and initiates the chemical removal of methane
Methane
Methane is a chemical compound with the chemical formula . It is the simplest alkane, the principal component of natural gas, and probably the most abundant organic compound on earth. The relative abundance of methane makes it an attractive fuel...
and other hydrocarbon
Hydrocarbon
In organic chemistry, a hydrocarbon is an organic compound consisting entirely of hydrogen and carbon. Hydrocarbons from which one hydrogen atom has been removed are functional groups, called hydrocarbyls....
s from the atmosphere. Thus, its concentration affects how long these compounds remain in the air.

Satellite
Satellite
In the context of spaceflight, a satellite is an object which has been placed into orbit by human endeavour. Such objects are sometimes called artificial satellites to distinguish them from natural satellites such as the Moon....
s can measure tropospheric ozone.http://tes.jpl.nasa.gov/http://jwocky.gsfc.nasa.gov/ Measurements specifically of ground-level ozone require in situ monitoring technology.

The majority of tropospheric ozone formation occurs when nitrogen oxides (NOx), carbon monoxide
Carbon monoxide
Carbon monoxide , also called carbonous oxide, is a colorless, odorless, and tasteless gas that is slightly lighter than air. It is highly toxic to humans and animals in higher quantities, although it is also produced in normal animal metabolism in low quantities, and is thought to have some normal...
(CO) and volatile organic compounds (VOCs), such as xylene
Xylene
Xylene encompasses three isomers of dimethylbenzene. The isomers are distinguished by the designations ortho- , meta- , and para- , which specify to which carbon atoms the two methyl groups are attached...
, react in the atmosphere in the presence of sunlight. NOx, CO, and VOCs are called ozone precursors. Motor vehicle exhaust, industrial emissions, and chemical solvents are the major anthropogenic sources of these chemicals. Another source is windshield washer fluid. Although these precursors often originate in urban areas, winds can carry NOx hundreds of kilometers, causing ozone formation to occur in less populated regions as well. Methane, a VOC whose atmospheric concentration has increased tremendously during the last century, contributes to ozone formation but on a global scale rather than in local or regional photochemical smog episodes. In situations where this exclusion of methane from the VOC group of substances is not obvious, the term Non-Methane VOC (NMVOC) is often used.

Peroxy radicals then go on to react with NO to give NO2 which is photolysed to give atomic oxygen and through reaction with oxygen a molecule of ozone:

The net effect of these reactions is:

This cycle involving HOx and NOx is terminated by the reaction of OH with NO2 to form nitric acid
Nitric acid
Nitric acid , also known as aqua fortis and spirit of nitre, is a highly corrosive and toxic strong acid.Colorless when pure, older samples tend to acquire a yellow cast due to the accumulation of oxides of nitrogen. If the solution contains more than 86% nitric acid, it is referred to as fuming...
or by the reaction of peroxy radicals with each other to form peroxides. The chemistry involving VOCs is much more complex but the same reaction of peroxy radicals oxidizing NO to NO2 is the critical step leading to ozone formation.

Ozone is known to have the following health effects at concentrations common in urban air:

A statistical study of 95 large urban communities in the United States found significant association between ozone levels and premature death. The study estimated that a one-third reduction in urban ozone concentrations would save roughly 4000 lives per year (Bell et al., 2004). 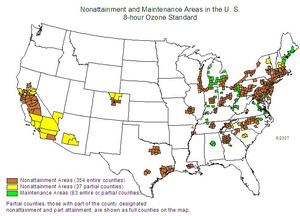