In the above equation, the iron
Iron
Iron is a chemical element with the symbol Fe and atomic number 26. It is a metal in the first transition series. It is the most common element forming the planet Earth as a whole, forming much of Earth's outer and inner core. It is the fourth most common element in the Earth's crust...
(Fe) has an oxidation number of 0 before and 3+ after the reaction.

How to dtermine strong oxidizing agent in waste

Identify the oxidizing agent in the following reaction 4Al+3O2=2Al2O3?
More 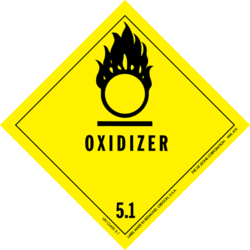 The formation of iron(III) oxide;

In the above equation, the iron
Iron
Iron is a chemical element with the symbol Fe and atomic number 26. It is a metal in the first transition series. It is the most common element forming the planet Earth as a whole, forming much of Earth's outer and inner core. It is the fourth most common element in the Earth's crust...
(Fe) has an oxidation number of 0 before and 3+ after the reaction. For oxygen
Oxygen
Oxygen is the element with atomic number 8 and represented by the symbol O. Its name derives from the Greek roots ὀξύς and -γενής , because at the time of naming, it was mistakenly thought that all acids required oxygen in their composition...
(O) the oxidation number began as 0 and decreased to 2−. These changes can be viewed as two "half-reaction
Half-reaction
A half reaction is either the oxidation or reduction reaction component of a redox reaction. A half reaction is obtained by considering the change in oxidation states of individual substances involved in the redox reaction.-Example:...
s" that occur concurrently:

Because the process of oxidation
Redox
Redox reactions describe all chemical reactions in which atoms have their oxidation state changed....
is so widespread (fire
Fire
Fire is the rapid oxidation of a material in the chemical process of combustion, releasing heat, light, and various reaction products. Slower oxidative processes like rusting or digestion are not included by this definition....
, explosives, chemical synthesis
Chemical synthesis
In chemistry, chemical synthesis is purposeful execution of chemical reactions to get a product, or several products. This happens by physical and chemical manipulations usually involving one or more reactions...
, corrosion
Corrosion
Corrosion is the disintegration of an engineered material into its constituent atoms due to chemical reactions with its surroundings. In the most common use of the word, this means electrochemical oxidation of metals in reaction with an oxidant such as oxygen...
), the term oxidizing agent has acquired multiple meanings.

In one definition, an oxidizing agent accepts - or gains - electrons. In this context, the reducing agent is called an electron donor. A classic oxidizing agent is the ferrocenium
Ferrocene
Ferrocene is an organometallic compound with the formula Fe2. It is the prototypical metallocene, a type of organometallic chemical compound consisting of two cyclopentadienyl rings bound on opposite sides of a central metal atom. Such organometallic compounds are also known as sandwich compounds...
ion [Fe(C5H5)2]+, which accepts an electron to form Fe(C5H5)2. Of great interest to chemist
Chemist
A chemist is a scientist trained in the study of chemistry. Chemists study the composition of matter and its properties such as density and acidity. Chemists carefully describe the properties they study in terms of quantities, with detail on the level of molecules and their component atoms...
s are the details of the electron transfer
Electron transfer
Electron transfer is the process by which an electron moves from an atom or a chemical species to another atom or chemical species...
event, which can be described as inner sphere or outer sphere.

In more colloquial usage, an oxidizing agent transfers oxygen atoms to the substrate. In this context, the oxidizing agent can be called an oxygenation reagent or oxygen-atom transfer agent. Examples include [MnO4]− permanganate
Permanganate
A permanganate is the general name for a chemical compound containing the manganate ion, . Because manganese is in the +7 oxidation state, the permanganate ion is a strong oxidizing agent. The ion has tetrahedral geometry...
, [CrO4]2− chromate
Chromate
Chromate salts contain the chromate anion, CrO42−. Dichromate salts contain the dichromate anion, Cr2O72−. They are oxyanions of chromium in the oxidation state +6. They are moderately strong oxidizing agents.- Chemical properties :...
, OsO4 osmium tetroxide, and especially [ClO4]− perchlorate
Perchlorate
Perchlorates are the salts derived from perchloric acid . They occur both naturally and through manufacturing. They have been used as a medicine for more than 50 years to treat thyroid gland disorders. They are used extensively within the pyrotechnics industry, and ammonium perchlorate is also a...
. Notice that these species are all oxide
Oxide
An oxide is a chemical compound that contains at least one oxygen atom in its chemical formula. Metal oxides typically contain an anion of oxygen in the oxidation state of −2....
s, and are in fact polyoxides. In some cases, these oxides can also serve as electron acceptors, as illustrated by the conversion of [MnO4]− to [MnO4]2−, manganate
Manganate
In inorganic nomenclature, a manganate is any negatively charged molecular entity with manganese as the central atom. However, the name is usually used to refer to the tetraoxidomanganate anion, MnO, also known as manganate because it contains manganese in the +6 oxidation state...
.


Common oxidizing agents and their products