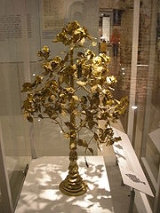 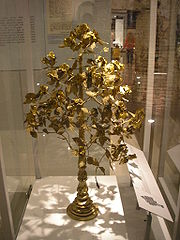 The term tributary state refers to one of the two main ways in which a pre-modern state might be subordinate to a more powerful neighbour. The heart of the relationship was that the tributary would send a regular token of submission (tribute
Tribute
A tribute is wealth, often in kind, that one party gives to another as a sign of respect or, as was often the case in historical contexts, of submission or allegiance. Various ancient states, which could be called suzerains, exacted tribute from areas they had conquered or threatened to conquer...
) to the superior power. This token often took the form of a substantial transfer of wealth, such as the delivery of gold, produce, or slaves, so that tribute might best be seen as the payment of protection money. Or it might be more symbolic: sometimes it amounted to no more than the delivery of a mark of submission such as the bunga mas
Bunga mas
The bunga mas dan perak , often abbreviated to bunga mas, was a tribute sent every three years to the King of Siam from its vassal states in the Malay Peninsula - in particular, by Terengganu, Kelantan, Kedah and Pattani. The tribute consisted of two small trees made of gold and silver, plus costly...
(golden flower) that rulers in the Malay peninsula
Malay Peninsula
The Malay Peninsula or Thai-Malay Peninsula is a peninsula in Southeast Asia. The land mass runs approximately north-south and, at its terminus, is the southern-most point of the Asian mainland...
used to send to the kings of Siam. It might also involve attendance by the subordinate ruler at the court of the hegemon in order to make a public show of submission.

Tributary relations involve no element of administrative control or interference by the hegemon. At most, the hegemonic power might intervene in succession issues and might ratify the accession of a monarch. For this reason, the extrapolation from pre-modern inter-state relations to the modern international system is problematic. The modern-day heirs of tribute hegemons tend to claim that the tributary relationship should be understood as an acknowledgement of the hegemon's sovereignty in the modern world, whereas former tributary states deny that there was any transfer of sovereignty. For instance, Tributaries of Imperial China implies Chinese sovereign claim over territories not now regarded as Chinese.

An unusually elaborate and formalized tribute system developed in East Asia
East Asia
East Asia or Eastern Asia is a subregion of Asia that can be defined in either geographical or cultural terms...
. Historically, the Emperor
Emperor of China
The Emperor of China refers to any sovereign of Imperial China reigning between the founding of Qin Dynasty of China, united by the King of Qin in 221 BCE, and the fall of Yuan Shikai's Empire of China in 1916. When referred to as the Son of Heaven , a title that predates the Qin unification, the...
of China
China
Chinese civilization may refer to:* China for more general discussion of the country.* Chinese culture* Greater China, the transnational community of ethnic Chinese.* History of China* Sinosphere, the area historically affected by Chinese culture...
saw himself as the emperor
Emperor
An emperor is a monarch, usually the sovereign ruler of an empire or another type of imperial realm. Empress, the female equivalent, may indicate an emperor's wife or a woman who rules in her own right...
of the entire civilized world
All under heaven
Tianxia is a phrase in the Chinese language and an ancient Chinese cultural concept that denoted either the entire geographical world or the metaphysical realm of mortals, and later became associated with political sovereignty.In ancient China, tianxia denoted the lands, space, and area divinely...
. It was not possible for such an emperor to have equal diplomatic relations with any other power, and so all diplomatic relations in the region were construed by the Chinese as tributary. The disdain of the state ideology of Confucianism
Confucianism
Confucianism is a Chinese ethical and philosophical system developed from the teachings of the Chinese philosopher Confucius . Confucianism originated as an "ethical-sociopolitical teaching" during the Spring and Autumn Period, but later developed metaphysical and cosmological elements in the Han...
for trade, and the conceit that Chinese civilization had no need of products or technology from outside meant that trade, when it was permitted, was also construed as tributary. Diplomatic missions and trading parties from non-Chinese regions were interpreted in Chinese records as being tributary, regardless of the intention of those regions. Under this construction, the goods received by China constituted a tributary offering, while those that the visitors received were interpreted as gifts that the emperor in his kindness had bestowed upon his distant tributaries.

In Al Andalus, the last remaining Moorish
Moors
The description Moors has referred to several historic and modern populations of the Maghreb region who are predominately of Berber and Arab descent. They came to conquer and rule the Iberian Peninsula for nearly 800 years. At that time they were Muslim, although earlier the people had followed...
Nasrid Dynasty
Nasrid dynasty
The Nasrid dynasty was the last Moorish and Muslim dynasty in Spain. The Nasrid dynasty rose to power after the defeat of the Almohad Caliphate in 1212 at the Battle of Las Navas de Tolosa...
in the Emirate of Granada
Emirate of Granada
The Emirate of Granada , also known as the Nasrid Kingdom of Granada , was an emirate established in 1238 following the defeat of Muhammad an-Nasir of the Almohad dynasty by an alliance of Christian kingdoms at the Battle of Las Navas de Tolosa in 1212...
paid tribute to the Christian Kingdom of Castile
Crown of Castile
The Crown of Castile was a medieval and modern state in the Iberian Peninsula that formed in 1230 as a result of the third and definitive union of the crowns and parliaments of the kingdoms of Castile and León upon the accession of the then King Ferdinand III of Castile to the vacant Leonese throne...
(present day Spain
Spain
Spain , officially the Kingdom of Spain languages]] under the European Charter for Regional or Minority Languages. In each of these, Spain's official name is as follows:;;;;;;), is a country and member state of the European Union located in southwestern Europe on the Iberian Peninsula...
). In the Western colonial system, non-Western states were sometimes incorporated into a European empire as protectorate
Protectorate
In history, the term protectorate has two different meanings. In its earliest inception, which has been adopted by modern international law, it is an autonomous territory that is protected diplomatically or militarily against third parties by a stronger state or entity...
s.

For modern forms of state subordination, see puppet state
Puppet state
A puppet state is a nominal sovereign of a state who is de facto controlled by a foreign power. The term refers to a government controlled by the government of another country like a puppeteer controls the strings of a marionette...
, satellite state
Satellite state
A satellite state is a political term that refers to a country that is formally independent, but under heavy political and economic influence or control by another country...
and client state
Client state
Client state is one of several terms used to describe the economic, political and/or military subordination of one state to a more powerful state in international affairs...
.