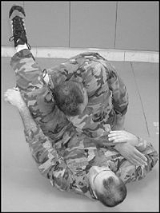 Encyclopedia
A triangle choke, or sankaku-jime (三角絞) in Judo
Judo
is a modern martial art and combat sport created in Japan in 1882 by Jigoro Kano. Its most prominent feature is its competitive element, where the object is to either throw or takedown one's opponent to the ground, immobilize or otherwise subdue one's opponent with a grappling maneuver, or force an...
, is a type of figure-four chokehold
Chokehold
A chokehold or choke is a general term for grappling hold that critically reduces or prevents either air or blood from passing through the neck of an opponent. The restriction may be of one or both and depends on the hold used and the reaction of the victim...
which strangles
Strangling
Strangling is compression of the neck that may lead to unconsciousness or death by causing an increasingly hypoxic state in the brain. Fatal strangling typically occurs in cases of violence, accidents, and as the auxiliary lethal mechanism in hangings in the event the neck does not break...
the opponent by encircling the opponent's neck
Neck
The neck is the part of the body, on many terrestrial or secondarily aquatic vertebrates, that distinguishes the head from the torso or trunk. The adjective signifying "of the neck" is cervical .-Boner anatomy: The cervical spine:The cervical portion of the human spine comprises seven boney...
and one arm with the legs in a configuration similar to the shape of a triangle
Triangle
A triangle is one of the basic shapes of geometry: a polygon with three corners or vertices and three sides or edges which are line segments. A triangle with vertices A, B, and C is denoted ....
. The technique is a type of lateral vascular restraint that constricts the blood flow
Blood flow
Blood flow is the continuous running of blood in the cardiovascular system.The human body is made up of several processes all carrying out various functions. We have the gastrointestinal system which aids the digestion and the absorption of food...
from the carotid arteries
Carotid artery
Carotid artery can refer to:* Common carotid artery* External carotid artery* Internal carotid artery...
to the brain
Brain
The brain is the center of the nervous system in all vertebrate and most invertebrate animals—only a few primitive invertebrates such as sponges, jellyfish, sea squirts and starfishes do not have one. It is located in the head, usually close to primary sensory apparatus such as vision, hearing,...
.

The triangle choke was seen in early Kosen judo
Kosen judo
refers to a set of competition rules of Kodokan judo with particular emphasis on ground grappling techniques such as pinning holds , joint locks and chokeholds , referred to as newaza in Japanese martial arts.- Background : schools started holding their own judo competitions from 1914...
competition. Tsunetane Oda, a judo groundwork specialist who died in 1955, had demonstrated the triangle choke on video. The move is often used in grappling
Grappling
Grappling refers to techniques, maneuvers, and counters applied to an opponent in order to gain a physical advantage, such as improving relative position, escaping, submitting, or injury to the opponent. Grappling is a general term that covers techniques used in many disciplines, styles and martial...
and mixed martial arts
Mixed martial arts
Mixed Martial Arts is a full contact combat sport that allows the use of both striking and grappling techniques, both standing and on the ground, including boxing, wrestling, Brazilian jiu-jitsu, muay Thai, kickboxing, karate, judo and other styles. The roots of modern mixed martial arts can be...
, usually by Brazilian Jiu-Jitsu
Brazilian Jiu-Jitsu
Brazilian Jiu-Jitsu is a martial art, combat sport, and a self defense system that focuses on grappling and especially ground fighting...
practitioners. 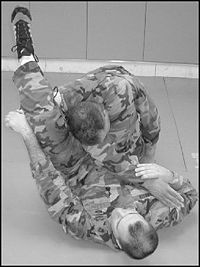 Tactically speaking, the triangle choke is a very effective counter attack easily employed from the bottom position, generally applied from the guard
Guard (grappling)
The guard is a ground grappling position where one combatant has their back to the ground, while attempting to control the other combatant using the legs...
, or open guard (defensive positions). The need for isolation of one arm could be a rationale for the frequency with which it is attempted in mixed martial arts and combat sports due to the brief vulnerability of one arm while executing hand strikes against an opponent in one of the aforementioned positions.

To escape a triangle choke, the defending practitioner must first elevate the head so as the preclude the full force of the submission, subsequently the practitioner must bring his arm away from opposition with his own carotid artery. Once out of immediate danger of loss of consciousness, the practitioner can concentrate reversing or escaping the figure-four lock.