Encyclopedia
Trausnitz Castle is a medieval castle
Castle
A castle is a type of fortified structure built in Europe and the Middle East during the Middle Ages by European nobility. Scholars debate the scope of the word castle, but usually consider it to be the private fortified residence of a lord or noble...
situated in Landshut
Landshut
Landshut is a city in Bavaria in the south-east of Germany, belonging to both Eastern and Southern Bavaria. Situated on the banks of the River Isar, Landshut is the capital of Lower Bavaria, one of the seven administrative regions of the Free State of Bavaria. It is also the seat of the...
, Bavaria
Bavaria
Bavaria, formally the Free State of Bavaria is a state of Germany, located in the southeast of Germany. With an area of , it is the largest state by area, forming almost 20% of the total land area of Germany...
in Germany. It was the home of the Wittelsbach
Wittelsbach
The Wittelsbach family is a European royal family and a German dynasty from Bavaria.Members of the family served as Dukes, Electors and Kings of Bavaria , Counts Palatine of the Rhine , Margraves of Brandenburg , Counts of Holland, Hainaut and Zeeland , Elector-Archbishops of Cologne , Dukes of...
dynasty, and it served as their ducal residence for Lower Bavaria
Lower Bavaria
Lower Bavaria is one of the seven administrative regions of Bavaria, Germany, located in the east of the state.- Geography :Lower Bavaria is subdivided into two regions - Landshut and Donau-Wald. Recent election results mark it as the most conservative part of Germany, generally giving huge...
from 1255–1503, and later as hereditary rulers of the whole of Bavaria. The castle was founded in 1204 by Duke Ludwig I. 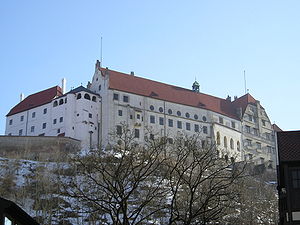 The Knights' Hall of Castle Trausnitz belongs to the main buildings of the 13th century and there were already around 1260/70. The room is 245 m² and is separated in two naves, to four "Jochen" a nave. The constructions that were used belong to the time period of the so called "Zisterziensergotik".
Today the Knights' Hall is used for festival banquets or for short exhibitions.

The "Loggia", already called so since 1493, was finished in the 16th century. The Tower Terrace sports a great view of the city through the round arcs. On the east side there is a stair tower. The wooden ceiling with shaped rosettes is descended from the time of Wilhelm V. There is a stone walled music platform on the south side of the room. The "Söller" is today used for many different functions, and it holds a maximum of 99 people.

The White Hall is on the first floor of the "Dürnitz" tract and is directly above the Knights' Hall. The White Hall has probably existed since the 15th century and was probably planned as a big ballroom. It appears that the hall was never finished, because there are no traces of paintings as usual for the castle at this time.
The about 240 m² tall room, which is two floors large, is today used for banquets, greetings, concerts and lectures. The visitors can enjoy the great view over the ancient city of Landshut.


Chamber of art and curiosities

A phenomenon in the Renaissance
Renaissance
The Renaissance was a cultural movement that spanned roughly the 14th to the 17th century, beginning in Italy in the Late Middle Ages and later spreading to the rest of Europe. The term is also used more loosely to refer to the historical era, but since the changes of the Renaissance were not...
that proliferated Europe throughout the 16th and 17th centuries, the cabinet of curiosities was in essence a personal collection of rare, unknown and marvelous objects. Popular, visual and encyclopedic in their approach, these cabinets, or Wunderkammern, included a diversity of specimens from both known and newly discovered worlds. These collections of curious objects that are seemingly not human in nature require the idea or application of human characteristics and traits to describe their inhuman state.

The Trausnitz Chamber of Art and Curiosities which was arranged by Prince Wilhelm in 1579 and then taken to Munich is a collection of 750 exhibits including works of art, treasures from the Orient and curiosities typical of the collections owned by rulers in the Renaissance era. It was reopened in September 2004 as one part of the Bavarian National Museum
Bavarian National Museum
The Bavarian National Museum in Munich is one of the most important cultural history museums in Europe.-Building and History:...
. The chamber is divided into four different themes. ARTIFICIALA—wondrous legerdemains—contains sumptuous bronze and painting but also midget carving of plum stones. NATURALIA—the wonder of nature—gets shown stuffed animals, extraordinary horns, mussels and minerals. The hall of EXOTICA—marvellousness from foreign countries—contains craft of corals, ivory and nacre whereas SCIENTIFICA—scientific arranges the world—shows scientific instruments of rational acquisition of the world in year 1600.

Trausnitz Castle is situated atop a hill above Landshut
Landshut
Landshut is a city in Bavaria in the south-east of Germany, belonging to both Eastern and Southern Bavaria. Situated on the banks of the River Isar, Landshut is the capital of Lower Bavaria, one of the seven administrative regions of the Free State of Bavaria. It is also the seat of the...
. Before the 16th century, it had the same name as the town, Landshut, which translates into "protector of the land". Previously, the castle guarded over the city and the surrounding land. The size of the castle has remained almost the same since Louis I of Bavaria in 1204. The castle was completed by the time of Emperor Frederick II
Frederick II, Holy Roman Emperor
Frederick II , was one of the most powerful Holy Roman Emperors of the Middle Ages and head of the House of Hohenstaufen. His political and cultural ambitions, based in Sicily and stretching through Italy to Germany, and even to Jerusalem, were enormous...
's visit in 1235.

During the first half of the 13th century, Trausnitz represented not only the centre of imperial politics but also of Staufer culture. Landshut was visited by famous minstrel singers, including Walter von der Vogelweide and Tannhäuser
Tannhäuser
Tannhäuser was a German Minnesänger and poet. Historically, his biography is obscure beyond the poetry, which dates between 1245 and 1265...
, during this period. The patronage of art by the Dukes of Bavaria was so high that they sent for a sculptor from Strasbourg
Strasbourg
Strasbourg is the capital and principal city of the Alsace region in eastern France and is the official seat of the European Parliament. Located close to the border with Germany, it is the capital of the Bas-Rhin département. The city and the region of Alsace are historically German-speaking,...
who created jewellery
Jewellery
Jewellery or jewelry is a form of personal adornment, such as brooches, rings, necklaces, earrings, and bracelets.With some exceptions, such as medical alert bracelets or military dog tags, jewellery normally differs from other items of personal adornment in that it has no other purpose than to...
for a sculpture that now stands in the Castle's "Burgkapelle".

The wealthy Duke of Landshut repeatedly renovated and expanded the buildings in Burg Trausnitz during the 15th century. The Dürnitz was built during this time. The outer defensive ring of walls were heightened and extended for the defensive towers.

Duke Louis X of Bavaria
Louis X, Duke of Bavaria
Louis X , was Duke of Bavaria , together with his older brother William IV, Duke of Bavaria...
furnished the castle in 1516 in the south German Renaissance
Renaissance
The Renaissance was a cultural movement that spanned roughly the 14th to the 17th century, beginning in Italy in the Late Middle Ages and later spreading to the rest of Europe. The term is also used more loosely to refer to the historical era, but since the changes of the Renaissance were not...
style, though few examples remain today. The arcades of the courtyard were created 1568–1578 by Friedrich Sustris
Friedrich Sustris
Friedrich Sustris was a German-Dutch painter, decorator and architect. He was a son of the artist Lambert Sustris, who worked in Italy....
for Crown Prince William
William V, Duke of Bavaria
William V, Duke of Bavaria , called the Pious, was Duke of Bavaria from 1579 to 1597.- Education and early life :...
. Many paintings in the Florentine style were added at this time, but most were lost due to fires over the years. Later, Prince Ferdinand Maria (1675–1679) undertook restoration of the burned paintings and decorated other rooms with other paintings.

During the 18th century, the castle was used a barracks and a prison for noble prisoners. At the beginning of the 19th century it was used as a hospital.

King Ludwig II of Bavaria
Ludwig II of Bavaria
Ludwig II was King of Bavaria from 1864 until shortly before his death. He is sometimes called the Swan King and der Märchenkönig, the Fairy tale King...
(who was the creator of Neuschwanstein Castle in Füssen
Füssen
Füssen is a town in Bavaria, Germany, in the district of Ostallgäu situated from the Austrian border. It is located on the banks of the Lech river. The River Lech flows into the Forggensee...
) ordered the decoration of a new splendid private apartment in the second floor of the prince's wing (1869-1873).

In 1961, a fire destroyed much of the interior decoration, including the king's rooms.