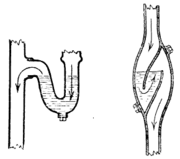 In plumbing
Plumbing
Plumbing is the system of pipes and drains installed in a building for the distribution of potable drinking water and the removal of waterborne wastes, and the skilled trade of working with pipes, tubing and plumbing fixtures in such systems. A plumber is someone who installs or repairs piping...
, a trap is a U-, S-, or J-shaped pipe
Pipe (material)
A pipe is a tubular section or hollow cylinder, usually but not necessarily of circular cross-section, used mainly to convey substances which can flow — liquids and gases , slurries, powders, masses of small solids...
located below or within a plumbing fixture
Plumbing fixture
A plumbing fixture is an exchangeable device which can be connected to an existing plumbing system to deliver and drain away water but which is also configured to enable a particular use.-Common fixtures:The most common plumbing fixtures are:*Bathtubs...
. An S-shaped trap is also known as the S-bend invented by Alexander Cummings
Alexander Cummings
Alexander Cummings was a Scottish watchmaker who was the first to patent a design of the flush toilet. His premises were in Bond Street, London.Born in Edinburgh in 1733, Cummings was a mathematician and mechanic as well as a watchmaker...
in 1775 but became known as the U-bend following the introduction of the U-shaped trap by Thomas Crapper
Thomas Crapper
Thomas Crapper was a plumber who founded Thomas Crapper & Co. in London. Contrary to widespread misconceptions, Crapper did not invent the flush toilet. He did, however, do much to increase the popularity of the toilet, and developed some important related inventions, such as the ballcock...
in 1880. The new U-bend could not jam, so, unlike the S-bend, it did not need an overflow. The bend is used to prevent sewer gas
Sewer gas
Sewer gas is a complex mixture of toxic and non-toxic gases produced and collected in sewage systems by the decomposition of organic household or industrial wastes, typical components of Sewage....
es from entering buildings. In refinery
Refinery
A refinery is a production facility composed of a group of chemical engineering unit processes and unit operations refining certain materials or converting raw material into products of value.-Types of refineries:Different types of refineries are as follows:...
applications, it also prevents hydrocarbon
Hydrocarbon
In organic chemistry, a hydrocarbon is an organic compound consisting entirely of hydrogen and carbon. Hydrocarbons from which one hydrogen atom has been removed are functional groups, called hydrocarbyls....
s and other dangerous gases from escaping outside through drains.

The most common of these traps in houses is referred to as a P-trap. It is the addition of a 90 degree fitting on the outlet side of a U-bend, thereby creating a P-like shape. It can also be referred to as a sink trap due to the fact it is installed under most house sinks.

Because of its shape, the trap retains a small amount of water after the fixture's use. This water in the trap creates a seal that prevents sewer gas
Sewer gas
Sewer gas is a complex mixture of toxic and non-toxic gases produced and collected in sewage systems by the decomposition of organic household or industrial wastes, typical components of Sewage....
from passing from the drain pipes back into the occupied space of the building. Essentially all plumbing fixture
Plumbing fixture
A plumbing fixture is an exchangeable device which can be connected to an existing plumbing system to deliver and drain away water but which is also configured to enable a particular use.-Common fixtures:The most common plumbing fixtures are:*Bathtubs...
s including sink
Sink
A sink is a bowl-shaped plumbing fixture used for washing hands, for dishwashing or other purposes. Sinks generally have taps that supply hot and cold water and may include a spray feature to be used for faster rinsing...
s, bathtub
Bathtub
A bath , bathtub , or tub is a large container for holding water in which a person may bathe . Most modern bathtubs are made of acrylic or fiberglass, but alternatives are available in enamel over steel or cast iron, and occasionally waterproof finished wood...
s, and toilet
Toilet
A toilet is a sanitation fixture used primarily for the disposal of human excrement, often found in a small room referred to as a toilet/bathroom/lavatory...
s must be equipped with either an internal or external trap.

Because it is a localized low-point in the plumbing, sink traps also tend to capture heavy objects (such as jewelry
Jewellery
Jewellery or jewelry is a form of personal adornment, such as brooches, rings, necklaces, earrings, and bracelets.With some exceptions, such as medical alert bracelets or military dog tags, jewellery normally differs from other items of personal adornment in that it has no other purpose than to...
) that are inadvertently dropped into the sink. Traps also tend to collect hair
Hair
Hair is a filamentous biomaterial, that grows from follicles found in the dermis. Found exclusively in mammals, hair is one of the defining characteristics of the mammalian class....
, sand
Sand
Sand is a naturally occurring granular material composed of finely divided rock and mineral particles.The composition of sand is highly variable, depending on the local rock sources and conditions, but the most common constituent of sand in inland continental settings and non-tropical coastal...
, and other debris and limit the ultimate size of objects that will pass on into the rest of the plumbing, thereby catching over-sized objects. For all of these reasons, most traps can either be disassembled for cleaning or they provide some sort of cleanout feature.

Maintaining the water seal is critical to trap operation; traps can and do dry out, and poor venting
Plumbing drainage venting
In modern plumbing, a drain-waste-vent is part of a system that removes sewage and greywater from a building and regulates air pressure in the waste-system pipes, facilitating flow. Waste is produced at fixtures such as toilets, sinks and showers, and exits the fixtures through a trap, a dipped...
can siphon
Siphon
The word siphon is sometimes used to refer to a wide variety of devices that involve the flow of liquids through tubes. But in the English language today, the word siphon usually refers to a tube in an inverted U shape which causes a liquid to flow uphill, above the surface of the reservoir,...
or blow water out of the traps. This is usually avoided by venting the drain pipes downstream of the trap; by being vented to the atmosphere outside the building, the drain lines never operate at a pressure much higher or lower than atmospheric pressure
Atmospheric pressure
Atmospheric pressure is the force per unit area exerted into a surface by the weight of air above that surface in the atmosphere of Earth . In most circumstances atmospheric pressure is closely approximated by the hydrostatic pressure caused by the weight of air above the measurement point...
. Plumbing codes usually provide strict limitations on how far a trap may be located from the nearest vent stack.

When a vent cannot be provided, codes may allow the use of an air admittance valve instead. These devices avoid negative pressure in the drain pipe by venting room air into the drain pipe (behind the trap). A "Chicago Loop
Chicago Loop (plumbing)
The Chicago Loop is an alternate way of venting the trap installed on an under counter island sink or other similar applications where a conventional vertical vent stack is not feasible.-Function:...
" is another alternative.

When a trap is installed on a fixture that is not routinely used, the eventual evaporation
Evaporation
Evaporation is a type of vaporization of a liquid that occurs only on the surface of a liquid. The other type of vaporization is boiling, which, instead, occurs on the entire mass of the liquid....
of the water in the trap must be considered. In these cases, a trap primer
Trap primer
A trap primer is a plumbing device or valve that adds water to traps. The water seals in traps are needed to prevent sewer gases from entering buildings, but because this water is exposed to the air, it is subject to evaporation over time in infrequently used floor drains, leading to the release...
may be installed; these are devices that automatically recharge traps with water to maintain their water seals.

In many locations, "S" traps are no longer accepted by the plumbing code
Plumbing code
Plumbing code is a code that provides regulations for the design, installation and inspection of building plumbing and sanitary systems. In the U.S., jurisdictions enact their own codes, some of which are based upon model plumbing codes. The most widely adopted plumbing code in the United States is...
s and are even illegal, as these traps tend to easily siphon dry even when well-vented. It is often possible to tell whether a household uses an S or U-bend by checking for the presence of an overflow pipe outlet. Certain drum-styled traps are also discouraged or banned.