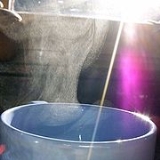 Overview
Evaporation is a type of vaporization
Vaporization
Vaporization of an element or compound is a phase transition from the liquid or solid phase to gas phase. There are three types of vaporization: evaporation, boiling and sublimation....
of a liquid
Liquid
Liquid is one of the three classical states of matter . Like a gas, a liquid is able to flow and take the shape of a container. Some liquids resist compression, while others can be compressed. Unlike a gas, a liquid does not disperse to fill every space of a container, and maintains a fairly...
that occurs only on the surface
Interface (chemistry)
An interface is a surface forming a common boundary among two different phases, such as an insoluble solid and a liquid, two immiscible liquids or a liquid and an insoluble gas. The importance of the interface depends on which type of system is being treated: the bigger the quotient area/volume,...
of a liquid. The other type of vaporization is boiling
Boiling
Boiling is the rapid vaporization of a liquid, which occurs when a liquid is heated to its boiling point, the temperature at which the vapor pressure of the liquid is equal to the pressure exerted on the liquid by the surrounding environmental pressure. While below the boiling point a liquid...
, which, instead, occurs on the entire mass of the liquid.

My partner and I got into a heated debated last night about whether a small dress would dry at the same time as a large dress of the same material. He...
More
x