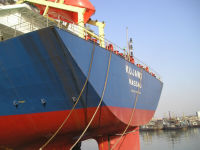 In naval architecture
Naval architecture
Naval architecture is an engineering discipline dealing with the design, construction, maintenance and operation of marine vessels and structures. Naval architecture involves basic and applied research, design, development, design evaluation and calculations during all stages of the life of a...
, a transom is the surface that forms the stern
Stern
The stern is the rear or aft-most part of a ship or boat, technically defined as the area built up over the sternpost, extending upwards from the counter rail to the taffrail. The stern lies opposite of the bow, the foremost part of a ship. Originally, the term only referred to the aft port section...
of a vessel. Transoms may be flat or curved and they may be vertical, raked forward, also known as a retroussé or reverse transom, angling forward (toward the bow) from the waterline to the deck, or raked aft, often simply called "raked", angling in the other direction. The bottom tip of the transom can be approximately on the waterline, in which case the stern of the vessel is referred to as a "transom stern", or the hull can continue so that the centreline is well above the waterline before terminating in a transom, in which case it is referred to as a "counter stern" or "cutaway stern." 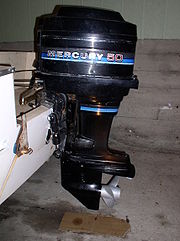 On smaller vessels where an outboard motor
Outboard motor
An outboard motor is a propulsion system for boats, consisting of a self-contained unit that includes engine, gearbox and propeller or jet drive, designed to be affixed to the outside of the transom and are the most common motorized method of propelling small watercraft...
is the source of propulsion
Marine propulsion
Marine propulsion is the mechanism or system used to generate thrust to move a ship or boat across water. While paddles and sails are still used on some smaller boats, most modern ships are propelled by mechanical systems consisting a motor or engine turning a propeller, or less frequently, in jet...
, the motor is usually mounted on the transom, and held in place either by clamp
Clamp (tool)
A clamp is a fastening device to hold or secure objects tightly together to prevent movement or separation through the application of inward pressure...
s or metal
Metal
A metal , is an element, compound, or alloy that is a good conductor of both electricity and heat. Metals are usually malleable and shiny, that is they reflect most of incident light...
bolts
Screw
A screw, or bolt, is a type of fastener characterized by a helical ridge, known as an external thread or just thread, wrapped around a cylinder. Some screw threads are designed to mate with a complementary thread, known as an internal thread, often in the form of a nut or an object that has the...
that go through the transom. In this arrangement, all the power of the motor is transmitted via the transom to the rest of the vessel's structure
Structure
Structure is a fundamental, tangible or intangible notion referring to the recognition, observation, nature, and permanence of patterns and relationships of entities. This notion may itself be an object, such as a built structure, or an attribute, such as the structure of society...
, making it a very important part of the vessel's construction
Construction
In the fields of architecture and civil engineering, construction is a process that consists of the building or assembling of infrastructure. Far from being a single activity, large scale construction is a feat of human multitasking...
.

The term is probably a corruption of Latin
Latin
Latin is an Italic language originally spoken in Latium and Ancient Rome. It, along with most European languages, is a descendant of the ancient Proto-Indo-European language. Although it is considered a dead language, a number of scholars and members of the Christian clergy speak it fluently, and...
transtrum, a thwart
Thwart
A thwart is a strut placed crosswise in a ship or boat, to brace it crosswise.In rowboats it can also serve as a seat for a rower....
, in a boat; equivalents are French
French language
French is a Romance language spoken as a first language in France, the Romandy region in Switzerland, Wallonia and Brussels in Belgium, Monaco, the regions of Quebec and Acadia in Canada, and by various communities elsewhere. Second-language speakers of French are distributed throughout many parts...
traverse, croisillon, German
German language
German is a West Germanic language, related to and classified alongside English and Dutch. With an estimated 90 – 98 million native speakers, German is one of the world's major languages and is the most widely-spoken first language in the European Union....
Heckspiegel.

The expression over the transom is rooted in the architectural meaning of the word. See: Transom (architectural)
Transom (architectural)
In architecture, a transom is the term given to a transverse beam or bar in a frame, or to the crosspiece separating a door or the like from a window or fanlight above it. Transom is also the customary U.S. word used for a transom light, the window over this crosspiece...
.
The source of this article is wikipedia, the free encyclopedia.  The text of this article is licensed under the GFDL.