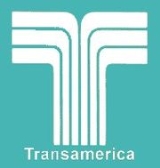 Encyclopedia
Transamerica Corporation is a holding company
Holding company
A holding company is a company or firm that owns other companies' outstanding stock. It usually refers to a company which does not produce goods or services itself; rather, its purpose is to own shares of other companies. Holding companies allow the reduction of risk for the owners and can allow...
for various life insurance
Life insurance
Life insurance is a contract between an insurance policy holder and an insurer, where the insurer promises to pay a designated beneficiary a sum of money upon the death of the insured person. Depending on the contract, other events such as terminal illness or critical illness may also trigger...
companies and investment
Investment
Investment has different meanings in finance and economics. Finance investment is putting money into something with the expectation of gain, that upon thorough analysis, has a high degree of security for the principal amount, as well as security of return, within an expected period of time...
firms doing business primarily in the United States
United States
The United States of America is a federal constitutional republic comprising fifty states and a federal district...
. It was acquired by the Dutch
Netherlands
The Netherlands is a constituent country of the Kingdom of the Netherlands, located mainly in North-West Europe and with several islands in the Caribbean. Mainland Netherlands borders the North Sea to the north and west, Belgium to the south, and Germany to the east, and shares maritime borders...
financial services conglomerate AEGON
AEGON
Aegon N.V. is one of the world’s largest life insurance and pension groups, and a strong provider of investment products. Aegon's head office is in The Hague, Netherlands...
in 1999.

Transamerica began as a holding company controlled by A. P. Giannini
Amadeo Giannini
Amadeo Pietro Giannini, also known as Amadeo Peter Giannini or A.P. Giannini , born in San Jose, California, was the American founder of Bank of America.-Biography:...
, then head of Bank of America
Bank of America
Bank of America Corporation, an American multinational banking and financial services corporation, is the second largest bank holding company in the United States by assets, and the fourth largest bank in the U.S. by market capitalization. The bank is headquartered in Charlotte, North Carolina...
and founder of its predecessor, the Bank of Italy
Bank of Italy (USA)
The Bank of Italy was founded in San Francisco, California, USA, in 1904 by Amadeo Giannini. It grew by a branch banking strategy to become the Bank of America, the world's largest commercial bank with 493 branches in California and assets of $5 billion in 1945....
in San Francisco
San Francisco, California
San Francisco , officially the City and County of San Francisco, is the financial, cultural, and transportation center of the San Francisco Bay Area, a region of 7.15 million people which includes San Jose and Oakland...
. As part of his vision of providing financial services to the general public, Giannini acquired Occidental Life Insurance Company through Transamerica Corporation in 1930. Occidental had first opened its doors to customers in 1906, and became prominent in the life insurance business on the West Coast.

Transamerica, which also owned the Occidental Life Insurance Company (renamed Transamerica Occidental Life Insurance Company in the early 1980s), intended to create a nationwide bank. However, in 1956, because of the passage of the Bank Holding Company Act, Transamerica Corporation divested itself of its banking concerns, which were spun off as Firstamerica Corporation
First Interstate Bancorp
First Interstate Bancorp was a bank holding company based in the United States that was taken over in 1996 by Wells Fargo. Headquartered in Los Angeles, it was the nation's eighth largest banking company....
. This left Transamerica with life insurance and property and casualty insurance operations. 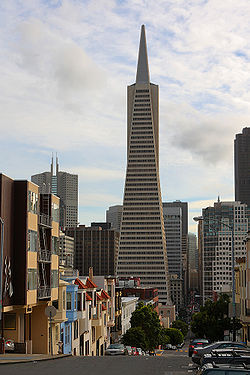 Over the next 20 years, Transamerica gradually became a diversified conglomerate which included United Artists
United Artists
United Artists Corporation is an American film studio. The original studio of that name was founded in 1919 by D. W. Griffith, Charles Chaplin, Mary Pickford and Douglas Fairbanks....
(a major motion picture studio and record company), Transamerica Airlines
Trans International Airlines
Trans International Airlines was an airline which offered charter service from and within the United States. It offered scheduled service operating as Transamerica Airlines in its last decade...
, Budget Rent A Car
Budget Rent a Car
Budget Rent a Car System, Inc. is an American car rental company that was founded in 1958 in Los Angeles, California by Morris Mirkin. Budget's operations are headquartered in Parsippany-Troy Hills Township, New Jersey....
, and a manufacturer of machinery.

Transamerica's longtime ambition of becoming a fully diversified global conglomerate (like General Electric
General Electric
General Electric Company , or GE, is an American multinational conglomerate corporation incorporated in Schenectady, New York and headquartered in Fairfield, Connecticut, United States...
) ended with the box office bomb
Box office bomb
The phrase box office bomb refers to a film for which the production and marketing costs greatly exceeded the revenue regained by the movie studio. This should not be confused with Hollywood accounting when official figures show large losses, yet the movie is a financial success.A film's financial...
of Heaven's Gate
Heaven's Gate (film)
Heaven's Gate is a 1980 American epic Western film based on the Johnson County War, a dispute between land barons and European immigrants in Wyoming in the 1890s...
in 1980. Although the company was still financially sound on paper, the negative publicity from Heaven's Gate badly shook the confidence of Transamerica management; it caused them to sell off United Artists and withdraw from the entertainment industry altogether. During the 1980s, Transamerica sold all operations that were not related to its core business of insurance and other financial services.

In the early 1990s, the company briefly entered the UK market.

In July 1999, with Frank C. Herringer as CEO, Transamerica Corporation was acquired by AEGON
AEGON
Aegon N.V. is one of the world’s largest life insurance and pension groups, and a strong provider of investment products. Aegon's head office is in The Hague, Netherlands...
, an insurance company based in the Netherlands
Netherlands
The Netherlands is a constituent country of the Kingdom of the Netherlands, located mainly in North-West Europe and with several islands in the Caribbean. Mainland Netherlands borders the North Sea to the north and west, Belgium to the south, and Germany to the east, and shares maritime borders...
. Transamerica Finance Corporation, responsible for commercial lending, was subsequently sold to GE Commercial Finance
GE Commercial Finance
GE Commercial Finance is a unit of GE Capital, . Headquartered in Norwalk, Connecticut, USA, it plays a role in over 35 countries and had assets of over US$335 billion at year end 2007....
in 2003.

As part of subsequent consolidation efforts Transamerica announced in early January 2007 that it would be closing its location in downtown Kansas City, Missouri
Kansas City, Missouri
Kansas City, Missouri is the largest city in the U.S. state of Missouri and is the anchor city of the Kansas City Metropolitan Area, the second largest metropolitan area in Missouri. It encompasses in parts of Jackson, Clay, Cass, and Platte counties...
and would be moving the functions performed there to Aegon's offices in Cedar Rapids, Iowa
Cedar Rapids, Iowa
Cedar Rapids is the second largest city in Iowa and is the county seat of Linn County. The city lies on both banks of the Cedar River, north of Iowa City and east of Des Moines, the state's capital and largest city...
.

Today, Transamerica's products are distributed by the following entities:

Recognition by the IMSA

The insurance industry launched the Insurance Marketplace Standards Association (IMSA), as a way of certifying an insurance company's dedication to ethical business practices.