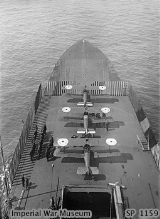 Encyclopedia
The Tondern raid, officially designated Operation F.7, was a British bombing raid mounted by the Royal Navy
Royal Navy
The Royal Navy is the naval warfare service branch of the British Armed Forces. Founded in the 16th century, it is the oldest service branch and is known as the Senior Service...
and Royal Air Force
Royal Air Force
The Royal Air Force is the aerial warfare service branch of the British Armed Forces. Formed on 1 April 1918, it is the oldest independent air force in the world...
against the Imperial German Navy's airship base at Tondern in Germany
Germany
Germany , officially the Federal Republic of Germany , is a federal parliamentary republic in Europe. The country consists of 16 states while the capital and largest city is Berlin. Germany covers an area of 357,021 km2 and has a largely temperate seasonal climate...
. It was the first attack in history made by aircraft flying from a carrier flight deck. On 19 July 1918 seven Sopwith Camels took off from the converted large cruiser Furious
HMS Furious (47)
HMS Furious was a modified cruiser built for the Royal Navy during the First World War. Designed to support the Baltic Project championed by the First Sea Lord of the Admiralty, Lord John Fisher, they were very lightly armoured and armed with only a few heavy guns. Furious was modified while...
. For the loss of one man, the British destroyed two German zeppelin
Zeppelin
A Zeppelin is a type of rigid airship pioneered by the German Count Ferdinand von Zeppelin in the early 20th century. It was based on designs he had outlined in 1874 and detailed in 1893. His plans were reviewed by committee in 1894 and patented in the United States on 14 March 1899...
s, L.54 and L.60 and a captive balloon.

In March 1918 the "large light cruiser" Furious
HMS Furious (47)
HMS Furious was a modified cruiser built for the Royal Navy during the First World War. Designed to support the Baltic Project championed by the First Sea Lord of the Admiralty, Lord John Fisher, they were very lightly armoured and armed with only a few heavy guns. Furious was modified while...
joined the Grand Fleet at Scapa Flow
Scapa Flow
right|thumb|Scapa Flow viewed from its eastern endScapa Flow is a body of water in the Orkney Islands, Scotland, United Kingdom, sheltered by the islands of Mainland, Graemsay, Burray, South Ronaldsay and Hoy. It is about...
, flying the flag of the Rear-Admiral Commanding Aircraft, R. F. Phillimore. Furious had initially been converted during her construction with a flight deck forward of her main superstructure, and during 1917 had been outfitted with the Sopwith Camel 2F.1, a navalised variant of the Sopwith Camel
Sopwith Camel
The Sopwith Camel was a British First World War single-seat biplane fighter introduced on the Western Front in 1917. Manufactured by Sopwith Aviation Company, it had a short-coupled fuselage, heavy, powerful rotary engine, and concentrated fire from twin synchronized machine guns. Though difficult...
with slightly shorter wings, a detachable rear-fuselage and an upward firing Lewis Gun
Lewis Gun
The Lewis Gun is a World War I–era light machine gun of American design that was perfected and widely used by the British Empire. It was first used in combat in World War I, and continued in service with a number of armed forces through to the end of the Korean War...
for use against zeppelins. These aircraft partially replaced the Sopwith 1½ Strutter
Sopwith 1½ Strutter
The Sopwith 1½ Strutter was a British one or two-seat biplane multi-role aircraft of the First World War. It is significant as the first British-designed two seater tractor fighter, and the first British aircraft to enter service with a synchronised machine gun...
.

In late 1917 Furious had been out of service while a flight deck was fitted aft (landing on which proved "almost as hazardous as ditching in the sea"). As part of the new Flying Squadron, Furious would be expected to form part of the Grand Fleet if and when a battle was fought with the German High Sea Fleet. Until such need arose however, she was dispatched on reconnaissance missions off the Heligoland Bight
Heligoland Bight
The Heligoland Bight, also known as Helgoland Bight, is a bay which forms the southern part of the German Bight, itself a bay of the North Sea, located at the mouth of the Elbe river...
searching for minefields and looking for evidence of counter-mining by the Germans.

It was originally planned to use Sopwith 1½ Strutters in an attack, but these were too valuable for reconnaissance purposes and Sopwith Camels substituted, whose range limitations meant an attack on the airship base at Tondern. The initial attack on Tondern, named Operation F.6 called for two waves of four aircraft, each pilot receiving special training. One of the pilots, Major Moore, was posted away before the operation's scheduled date of 29 June 1918, by which time it was too late to train a replacement. Training consisted of bombing runs on the airfield at Turnhouse
Turnhouse
Turnhouse is a suburb in the west of Edinburgh, the capital of Scotland.The area is east of Edinburgh International Airport, and Turnhouse is also the name for the former Royal Air Force base, now closed, which dates back to the First World War and was the origin of the current civilian airport...
, where the outlines of Tondern's three airship sheds were marked out. The pilots were Captains W. D. Jackson, W. F. Dickson
William Dickson (RAF officer)
Marshal of the Royal Air Force Sir William Forster Dickson GCB, KBE, DSO, AFC was a Royal Naval Air Service aviator during World War I, an middle-ranking Royal Air Force officer during the inter-war years and a senior Royal Air Force commander during and after World War II...
, B. A. Smart and T. K. Thyne, and Lieutenants N. E. Williams, S. Dawson and W. A. Yeulett.

On 27 June Furious put to sea from Rosyth
Rosyth
Rosyth is a town located on the Firth of Forth, three miles south of the centre of Dunfermline. According to an estimate taken in 2008, the town has a population of 12,790....
, escorted by the First Light Cruiser Squadron and eight destroyers from the 13th Flotilla. On 29 June the ships reached the flying off point but with Force 6
Beaufort scale
The Beaufort Scale is an empirical measure that relates wind speed to observed conditions at sea or on land. Its full name is the Beaufort Wind Force Scale.-History:...
winds prevailing flying was deemed impossible and the operation was called off.

The mission was attempted again, renamed Operation F.7, and Furious went to sea at 12:03 on 17 July. This time she was escorted by "Force B", including a division of the First Battle Squadron (all the new Revenge class battleship
Revenge class battleship
The Revenge class battleships were five battleships of the Royal Navy, ordered as World War I loomed on the horizon, and launched in 1914–1916...
s), the Seventh Light Cruiser Squadron and a destroyer screen. HMS Resolution's
HMS Resolution (1915)
HMS Resolution was a Revenge-class battleship of the Royal Navy. She was laid down at Palmers Shipbuilding and Iron Company, Jarrow on 29 November 1913, launched on 14 January 1915, and commissioned on 30 December 1916....
"Y" turret guns had been loaded with a special shrapnel shell for use against airships. During the passage the destroyer Valentine prosecuted a reported submarine contact, but nothing else untoward occurred.

At 03:04 in the morning of 19 July Furious was ready to fly off her Camels when a thunderstorm struck. Rather than cancel the operation, it was decided to delay it twenty-four hours and Furious and her destroyer screen fell back on Force B. The combined squadron cruised out of sight off the Danish coast until the morning of 19 July, and in worsening weather conditions Furious flew off her Camels between 03:13 and 03:21. The first flight consisted of Jackson, Dickson and Williams; the second of Smart, Dawson, Yeulett and Thyne. Thyne was forced to turn around with engine trouble before reaching the target and ditched his aircraft before being recovered.

The first three aircraft arrived over Tondern at 04:35, taking the base by surprise. There were three airship sheds, codenamed by the Germans as "Toska", "Tobias" and "Toni". Toska, the largest one, was a double shed and housed the airships L.54 and L.60. Tobias contained a captive balloon and Toni was in the process of being dismantled. The first wave of aircraft focussed on Toska and three bombs hit the shed and detonated the gas bags of L.54 and L.60, destroying them by fire but not causing them to explode and destroy the shed. Another bomb from the first wave hit Tobias shed and damaged the balloon. The second wave destroyed the captive balloon afire and scored a number of near misses on a wagon loaded with hydrogen cylinders. Despite the loss of the two airships the Germans suffered only four men injured.

During the attack ground fire was directed at both waves but the only damage was an undercarriage wheel shot off a Camel from the second wave. Williams, Jackson and Dawson, in the belief that they had insufficient fuel to reach the British squadron offshore, headed for Denmark and landed there. Dickson, Yuelett and Smart flew to sea to find the British ships. Dickson ditched at 05:55 and Smart, having suffered engine trouble, at 06:30. Yuelett was not heard from again and presumed drowned, and it was supposed that he had been forced to ditch prematurely through fuel exhaustion. The British squadron waited for the other pilots until the allotted time period for the Camels' fuel capacity had run-out, then after 07:00 the ships took cruising formation and made for home.

The German Naval Airship Division quickly had the double hangar Toska repaired, but Tondern was abandoned as an active base, and ordered to be used only as an emergency landing site. Defences at the other bases was improved, and at Nordholz
Nordholz
Nordholz is a municipality in the district of Cuxhaven, in Lower Saxony, Germany. It is situated approx. 25 km north of Bremerhaven, and 12 km southwest of Cuxhaven.Nordholz belonged to the Prince-Archbishopric of Bremen, established in 1180...
a swathe of the surrounding countryside was burned off so as to prevent it being set alight by enemy bombs. The British conducted no other carrier raids during the war. Of the British pilots Dixon was awarded the DSO
Distinguished Service Order
The Distinguished Service Order is a military decoration of the United Kingdom, and formerly of other parts of the British Commonwealth and Empire, awarded for meritorious or distinguished service by officers of the armed forces during wartime, typically in actual combat.Instituted on 6 September...
, whilst Smart received the bar to his previously awarded DSO. Yeulett's body was later recoved from the sea.