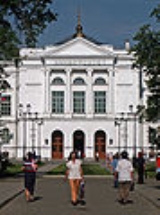 Encyclopedia
Tomsk State University (TSU), formerly Imperial Tomsk University, is the first university in Siberia
Siberia
Siberia is an extensive region constituting almost all of Northern Asia. Comprising the central and eastern portion of the Russian Federation, it was part of the Soviet Union from its beginning, as its predecessor states, the Tsardom of Russia and the Russian Empire, conquered it during the 16th...
—it was founded in 1878 in Tomsk
Tomsk
Tomsk is a city and the administrative center of Tomsk Oblast, Russia, located on the Tom River. One of the oldest towns in Siberia, Tomsk celebrated its 400th anniversary in 2004...
, Russia. TSU opened in 1888 with only one department, the medical school. Today, there are 22 departments in TSU with 23,000 students. 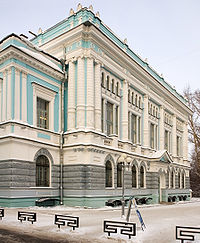 The idea to open the first university in Siberia occurred to progressive minds in Russia back in 1803, but it was not until the late nineteenth century that it became realistic. The government delayed the decision either due to a lack of money or the inadequate development of secondary education in the region. Moreover, some thought that a university in Siberia was a luxury and it was dangerous to give Siberian people higher education. These reasons only resulted in a delay, and could not entirely remove this question from the agenda.

Tomsk was one of the seven cities in Siberia that aspired to the high honour of hosting a university. Eventually, it won. On May 28, 1878 Emperor Alexander II
Alexander II of Russia
Alexander II , also known as Alexander the Liberator was the Emperor of the Russian Empire from 3 March 1855 until his assassination in 1881...
passed the Decree of the State Council of the Russian Empire
Russian Empire
The Russian Empire was a state that existed from 1721 until the Russian Revolution of 1917. It was the successor to the Tsardom of Russia and the predecessor of the Soviet Union...
permitting the establishment of the Imperial Siberian University in Tomsk. This put an end to the 75-year-old struggle for a university in Tomsk and marked the beginning of its history: the construction, opening and development of the ninth higher educational establishment in Russia and the first in Siberia. The construction of the main building of Tomsk Imperial University and the first dormitory was made possible thanks to private donations, which amounted to half of the budget. Simultaneous with the construction, a library was being assembled as were the materials for some laboratories, museums, the botanical garden
Botanical garden
A botanical garden The terms botanic and botanical, and garden or gardens are used more-or-less interchangeably, although the word botanic is generally reserved for the earlier, more traditional gardens. is a well-tended area displaying a wide range of plants labelled with their botanical names...
with its greenhouse and the herbarium.

The university was meant to be an exclusive educational establishment that combined the academic process with research and aimed at developing a creative personality capable of self-improvement. As a classic university, TSU is based on research and educational schools. It means that the most research is based in the sciences and academic process must involve a sound combination of the natural sciences and the humanities accompanied with a flexibility in education. Professor V. M. Florinsky said in his speech at the opening ceremony: “We would like our professors and scientists, inspired by their love for the Motherland, to serve both students and science with equal eagerness. We would like them to be more independent in their scientific research and to set up their own scientific schools. Only a combination of the academic process with scientific research will enable our university to fulfill its high mission and, independently of its direct utilitarian objectives, to bear fruit in higher education.” These are the principles that Tomsk State University has been following ever since.

Tomsk State University has always adhered to the strategic direction of its activities in preparing research, educational and managerial elite on the basis of the integration of academic process and scientific research. More than a hundred thousand of its graduates have contributed to the fame and authority of their alma mater. Tomsk State University can boast of having graduated about 100 members of the Russian Academy of Sciences
Russian Academy of Sciences
The Russian Academy of Sciences consists of the national academy of Russia and a network of scientific research institutes from across the Russian Federation as well as auxiliary scientific and social units like libraries, publishers and hospitals....
, the Russian Academy of Medical Sciences, the Academy of Sciences of CIS States and more than 150 Russian Governmental Prizewinners. Two Nobel Prize winners, Nikolay Semyonov
Nikolay Semyonov
Nikolay Nikolayevich Semyonov was a Russian/Soviet physicist and chemist. Semyonov was awarded the 1956 Nobel Prize in Chemistry for his work on the mechanism of chemical transformation.-Life:...
and Ivan Pavlov
Ivan Pavlov
Ivan Petrovich Pavlov was a famous Russian physiologist. Although he made significant contributions to psychology, he was not in fact a psychologist himself but was a mathematician and actually had strong distaste for the field....
, were members of the university faculty. Today many TSU alumni and staff head various universities, academic institutes, research institutes and enterprises, and hold important governmental positions.

Imperial University, later Tomsk State University, has had a key influence on the development of the research, educational and the cultural potential in the Asian part of Russia, It is ranked one of the top national universities.

The university has been given three State Awards: 1967—the Order of the Labour Red Banner, 1980—the Order of October Revolution, 1978—Siberian Institute of Physics and Technology at TSU was awarded the Order of the Red Banner and First Degree Diploma from MVSSO USSR. In 1998 by the Russian Presidential Decree No. 30, TSU was listed in the State Code of Most Valuable Objects of Cultural Heritage of the Peoples of the Russian Federation.
On August 8, 2003 Russian President, Vladimir Putin
Vladimir Putin
Vladimir Vladimirovich Putin served as the second President of the Russian Federation and is the current Prime Minister of Russia, as well as chairman of United Russia and Chairman of the Council of Ministers of the Union of Russia and Belarus. He became acting President on 31 December 1999, when...
signed a Decree in honour of the celebration of the 125th anniversary of TSU as a leading Russian center of education, science and culture.

Originally, the university was to consist of 4 departments as listed in the Charter of Imperial universities. However, TSU began with only a Medical Department. During the following years the problem of its extension was being solved. Nevertheless, the Medical Department had all the necessary divisions and study-rooms to teach students the entire range of natural sciences. The opening of the Law School meant that the university had a wider range of departments that taught the arts. In 1917 when two more departments—the Department of Physics and Mathematics and the Department of History and Philology—were established, the university complied with the original vision. Today TSU is the largest classic university in the East of Russia. There are 23 departments, 5 branches, educating more than 23,000 students in 85 specializations and programs.

The university has established 45 centers of pre-admission training on campuses of secondary schools in different regions of Siberia and Kazakhstan
Kazakhstan
Kazakhstan , officially the Republic of Kazakhstan, is a transcontinental country in Central Asia and Eastern Europe. Ranked as the ninth largest country in the world, it is also the world's largest landlocked country; its territory of is greater than Western Europe...
which enables 2.000 people to study there annually.

TSU offers a program “Training Managers and Executives for the Enterprises of the National Economy” (Presidential Management Training Initiative). Its alumni are in great demand as top and senior managers at numerous enterprises. The university has been very active in developing distance-learning programs, multi-media courses, electronic textbooks, etc. including those for secondary schools. Many of them have been highly graded at international exhibitions. The university pays great attention to the training of secondary school teachers.