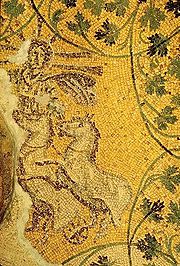 The popularly-named "Tomb of the Julii" (Mausoleum "M") survives in the Vatican Necropolis
Vatican Necropolis
The Vatican Necropolis, also known as the Scavi, lies under the Vatican City, at depths varying between 5 and 12 meters below the basilica. The Vatican sponsored archeological excavations under Saint Peter's in the years 1940 - 1949 which revealed parts of a necropolis dating to Imperial times...
beneath St. Peter's Basilica
St. Peter's Basilica
The Papal Basilica of Saint Peter , officially known in Italian as ' and commonly known as Saint Peter's Basilica, is a Late Renaissance church located within the Vatican City. Saint Peter's Basilica has the largest interior of any Christian church in the world...
, the so-called "Vatican grotto
Grotto
A grotto is any type of natural or artificial cave that is associated with modern, historic or prehistoric use by humans. When it is not an artificial garden feature, a grotto is often a small cave near water and often flooded or liable to flood at high tide...
". The serendipitous discovery near the crypt
Crypt
In architecture, a crypt is a stone chamber or vault beneath the floor of a burial vault possibly containing sarcophagi, coffins or relics....
has a vaulted ceiling bearing a mosaic
Mosaic
Mosaic is the art of creating images with an assemblage of small pieces of colored glass, stone, or other materials. It may be a technique of decorative art, an aspect of interior decoration, or of cultural and spiritual significance as in a cathedral...
depicting Helios
Helios
Helios was the personification of the Sun in Greek mythology. Homer often calls him simply Titan or Hyperion, while Hesiod and the Homeric Hymn separate him as a son of the Titans Hyperion and Theia or Euryphaessa and brother of the goddesses Selene, the moon, and Eos, the dawn...
(Roman Sol Invictus
Sol Invictus
Sol Invictus was the official sun god of the later Roman empire. In 274 Aurelian made it an official cult alongside the traditional Roman cults. Scholars disagree whether the new deity was a refoundation of the ancient Latin cult of Sol, a revival of the cult of Elagabalus or completely new...
) with an aureole riding in his chariot, within a framing of rinceaux of vine leaves, which are not given their usual pagan Dionysiac
Dionysus
Dionysus was the god of the grape harvest, winemaking and wine, of ritual madness and ecstasy in Greek mythology. His name in Linear B tablets shows he was worshipped from c. 1500—1100 BC by Mycenean Greeks: other traces of Dionysian-type cult have been found in ancient Minoan Crete...
reading in this context but are related to the True Vine imagery of Gospel of John
Gospel of John
The Gospel According to John , commonly referred to as the Gospel of John or simply John, and often referred to in New Testament scholarship as the Fourth Gospel, is an account of the public ministry of Jesus...
15.1. The mosaic is dated to the late 3rd century to early 4th century. Other mosaics in this tomb depicting Jonah and the whale, the good shepherd carrying a lamb (the kriophoros
Kriophoros
In ancient Greek cult, kriophoros, criophorus , the "ram-bearer" is a figure that commemorates the solemn sacrifice of a ram...
motif), and fishermen have encouraged its interpretation as a Christian tomb.