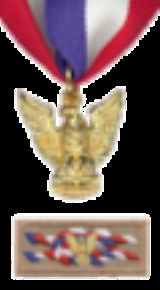 The DESA was first introduced in 1969 and is awarded by the National Eagle Scout Association. Prior to the establishment of the Distinguished Eagle Scout Award, a "gold Eagle Scout badge" was awarded to Daniel Carter Beard
Daniel Carter Beard
Daniel Carter "Uncle Dan" Beard was an American illustrator, author, youth leader, and social reformer who founded the Sons of Daniel Boone in 1905, which Beard later merged with the Boy Scouts of America .-Early life:...
at the Second National Training Conference of Scout Executives held in 1922 in Blue Ridge, North Carolina. This was the only time this gold badge was awarded.
The source of this article is wikipedia, the free encyclopedia.  The text of this article is licensed under the GFDL.