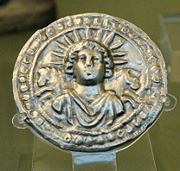 How the name is to be deciphered depends on how it is segmented; i.e., whether it is Tolis-tobogii or Tolisto-bogii. If the latter choice is given credibility, a segment, -bogio-, can be abstracted. The meaning of Tolisto is obscure; it is not necessarily even Celtic. Tolistobogii is often translated Tolistoboii presuming a hypothesis that -bogioi refers to the Boii
Boii
The Boii were one of the most prominent ancient Celtic tribes of the later Iron Age, attested at various times in Cisalpine Gaul , Pannonia , in and around Bohemia, and Transalpine Gaul...
and that the tribe is a branch of the latter. There is no proof of such a hypothesis but it fits many of the circumstances.

The alternation between -bogio- and -boio- is common also to the names of early Germanic Bavaria
Bavarii
The Bavarii were a Germanic tribe whose name emerged late in Teutonic tribal times. The full name originally was the Germanic *baio-warioz. This name has been handed down as Baiwaren, Baioaren, Bioras, latinised Bavarii, Baioarii. or Bavarii, Bavarians, Bajuwaren, Bajuvarii, Bajuwaren and Baiern....
, in which the -o- becomes Germanic -a-: -bagio- and -baio-. In addition to the forms without the guttural: Baiovarii, Beovarii, Bajuvarii, and so on, is another, gutteralized series: Bagibareia, Bagoari, Bauguarii, Baucueri, Bauocarii, Bacuarenses, and so on, covering a somewhat wider Danubian
Danube
The Danube is a river in the Central Europe and the Europe's second longest river after the Volga. It is classified as an international waterway....
area than today's Bavaria
Bavaria
Bavaria, formally the Free State of Bavaria is a state of Germany, located in the southeast of Germany. With an area of , it is the largest state by area, forming almost 20% of the total land area of Germany...
. The Tolistobogii must have traversed this area on their way to Anatolia, if they were not actually from it, which the name indicates they probably were.

Like the etymology of Boii itself, the guttural alternative has never been satisfactorily explained, although a few substantial conjectures have been made, such as Obermüller's invocation of Welsh buwch, "cattle", in the "cow" etymology of Boii. Similar gutteralized Celtic words can be found for the "warrior" or "striker" etymology. Regardless of the etymology or form of the name, the Boii certainly appear in the name of Bavaria. The name of a settlement of the Tolistobogii, Vindia, is consistent with the Boic custom of naming places and people after *Vindos, "the shining one"; to wit, Vindelicia
Vindelicia
In the pre-Roman geography of Europe, Vindelicia identifies the country inhabited by the Vindelici, a region bounded on the north by the Danube and the Hadrian's Limes Germanicus, on the east by the Oenus , on the south by Raetia and on the west by the territory of the Helvetii...
and Vindobona
Vindobona
Vindobona was originally a Celtic settlement, and later a Roman military camp on the site of the modern city of Vienna in Austria. Around 15 BC, the kingdom of Noricum was included in the Roman Empire...
. *Vindos appears elsewhere among the Celts of various times as Vindonnus and Gwyn ap Nudd
Gwyn ap Nudd
Gwyn ap Nudd is a Welsh mythological figure, the king of the Tylwyth Teg or "fair folk" and ruler of the Welsh Otherworld, Annwn. Described as a great warrior with a "blackened face", Gwyn is intimately associated with the otherworld in medieval Welsh literature, and is associated with the...
, and in the modern Celtic languages is the adjective fionn (Ireland, Scotland) and gwyn/gwin/gwen (Wales, Cornwall, Brittany)fair, white, blond; and common as a personal name in the Gaelic word, as Fionn as well as the compound feminine name Fionnuala Fair-Nuala .

The Tolistobogii for the greater part of their centuries-long stay in Galatia
Galatia
Ancient Galatia was an area in the highlands of central Anatolia in modern Turkey. Galatia was named for the immigrant Gauls from Thrace , who settled here and became its ruling caste in the 3rd century BC, following the Gallic invasion of the Balkans in 279 BC. It has been called the "Gallia" of...
were located in what is now Eskişehir Province
Eskisehir Province
Eskişehir Province is a province in northwestern Turkey. Its adjacent provinces are Bilecik to the northwest, Kütahya to the west, Afyon to the southwest, Konya to the south, Ankara to the east, and Bolu to the north. The provincial capital is Eskişehir. Most of the province is laid down in...
just to the west of Ankara
Ankara
Ankara is the capital of Turkey and the country's second largest city after Istanbul. The city has a mean elevation of , and as of 2010 the metropolitan area in the entire Ankara Province had a population of 4.4 million....

The Tolistobogii first appear as troops in the army of Brennus
Brennus
Brennus is the name of two Gaulish chieftains famous in ancient history:* Brennus , chieftain of the Senones, a Gallic tribe originating from the modern areas of France known as Seine-et-Marne, Loiret, and Yonne; in 387 BC, in the Battle of the Allia, he led an army of Cisalpine Gauls in their...
on its way to plunder Delphi
Delphi
Delphi is both an archaeological site and a modern town in Greece on the south-western spur of Mount Parnassus in the valley of Phocis.In Greek mythology, Delphi was the site of the Delphic oracle, the most important oracle in the classical Greek world, and a major site for the worship of the god...
in Greece in 279 BC. In Dardania
Dardani
Dardania was the region of the Dardani .Located at the Thraco-Illyrian contact zone, their identification as either an Illyrian or Thracian tribe is uncertain. Their territory itself was not considered part of Illyria by Strabo. The term used for their territory was , while for other tribes had...
, it is said, some 20,000 men under Leonorius
Leonnorius
Leonnorius was one of the leaders of the Celts in their invasion of Macedonia and the adjoining countries. When the main body under Brennus marched southwards into Macedonia and Greece , Leonnorius and Lutarius led a detachment, twenty-thousand strong, into Thrace, where they ravaged the country to...
and Lutarius in these three tribes seceded from Brennus and entered Thrace
Thrace
Thrace is a historical and geographic area in southeast Europe. As a geographical concept, Thrace designates a region bounded by the Balkan Mountains on the north, Rhodope Mountains and the Aegean Sea on the south, and by the Black Sea and the Sea of Marmara on the east...
, where they collected tribute from the region, including Byzantium
Byzantium
Byzantium was an ancient Greek city, founded by Greek colonists from Megara in 667 BC and named after their king Byzas . The name Byzantium is a Latinization of the original name Byzantion...
. Subsequently they crossed the Hellespont to fight as mercenaries for Nicomedes I of Bithynia
Bithynia
Bithynia was an ancient region, kingdom and Roman province in the northwest of Asia Minor, adjoining the Propontis, the Thracian Bosporus and the Euxine .-Description:...
and then left Bithynia to plunder Anatolia. The Tolistobogii received Aeolia
Aeolis
Aeolis or Aeolia was an area that comprised the west and northwestern region of Asia Minor, mostly along the coast, and also several offshore islands , where the Aeolian Greek city-states were located...
and Ionia
Ionia
Ionia is an ancient region of central coastal Anatolia in present-day Turkey, the region nearest İzmir, which was historically Smyrna. It consisted of the northernmost territories of the Ionian League of Greek settlements...
as territory and where one of the three majority shareholders of the Galatian
Galatian
Galatian may refer to:*of or relating to Galatia or its people*Galatian language...
state alongside the Trocmii and a subdivision of the Volcae Tectosages who are more commonly associated with the Toulouse
The source of this article is wikipedia, the free encyclopedia.  The text of this article is licensed under the GFDL.