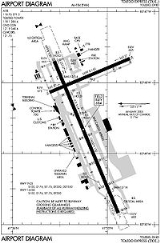 Encyclopedia
Toledo Express Airport is a passenger and cargo airport
Airport
An airport is a location where aircraft such as fixed-wing aircraft, helicopters, and blimps take off and land. Aircraft may be stored or maintained at an airport...
located 10 miles (16 km) west of the city of Toledo
Toledo, Ohio
Toledo is the fourth most populous city in the U.S. state of Ohio and is the county seat of Lucas County. Toledo is in northwest Ohio, on the western end of Lake Erie, and borders the State of Michigan...
in the extreme Western portion of Lucas County, Ohio
Lucas County, Ohio
----...
, United States, near the border with Fulton County
Fulton County, Ohio
Fulton County is a county located in the U.S. state of Ohio. As of 2010, the population was 42,698. Its county seat is Wauseon. Fulton County is named for Robert Fulton, inventor of the steamboat....
, in the townships of Swanton
Swanton Township, Lucas County, Ohio
Swanton Township is one of the eleven townships of Lucas County, Ohio, United States. The 2000 census found 3,354 people in the township, 3,330 of whom lived in the unincorporated portions of the township.-Geography:...
and Monclova
Monclova Township, Lucas County, Ohio
Monclova Township is one of the eleven townships of Lucas County, Ohio, United States. The 2000 census found 6,767 people in the township.-Geography:Located in the central part of the county, it borders the following townships and city:...
. It is also a base for the Ohio Air National Guard
Ohio Air National Guard
The Ohio Air National Guard is a part of the United States National Guard and an Air Reserve Component of the United States Air Force. It is composed of approximately 5,000 airmen and officers assigned to four flying wings and eight non-flying support units. OHANG units are based in Columbus,...
's 180th Fighter Wing
180th Fighter Wing
The United States Air Force's 180th Fighter Wing is an F-16 Fighting Falcon fighter organization assigned to the Ohio Air National Guard and located at the Toledo Express Airport, Ohio.-Mission:...
. As well as being a main airport for Toledo, it is also a secondary airport for Detroit, Michigan
Detroit, Michigan
Detroit is the major city among the primary cultural, financial, and transportation centers in the Metro Detroit area, a region of 5.2 million people. As the seat of Wayne County, the city of Detroit is the largest city in the U.S. state of Michigan and serves as a major port on the Detroit River...
, and serves as a regional hub for smaller communities and rural areas in northwest Ohio
Northwest Ohio
Northwest or northwestern Ohio consists of multiple counties in the northwestern corner of the US state of Ohio. This area borders Lake Erie, southern Michigan, and eastern Indiana. Some areas in northwestern Ohio are also considered the Black Swamp area. The Toledo metropolitan area is also part...
and southeast Michigan
Southeast Michigan
Southeast Michigan, also called Southeastern Michigan, is a region in the Lower Peninsula of the U.S. state of Michigan that is home to a majority of the state's businesses and industries as well as slightly over half of the state's population, most of whom are concentrated in Metro...
. The airport is operated by the Toledo-Lucas County Port Authority
Toledo-Lucas County Port Authority
The Toledo-Lucas County Port Authority is a port authority financing and/or operating air, rail, trucking, and port facilities, as well as supporting and funding economic development activities in Lucas County, located in northwest Ohio and bordering on southeast Michigan.-Mission:The Port...
. Toledo Express served 182,827 passengers in 2009, a 27% drop from 2008 (250,876). This ranked TOL 174th in North America.

Toledo Express also served as the main North American hub for DB Schenker
DB Schenker
DB Schenker is a logistics company, a wholly owned subsidiary of Deutsche Bahn AG. The company, created by reorganisation and rebranding of various Deutsche Bahn subsidiaries, comprises a logistics division encompassing air, land and sea freight, and a rail division made up from a variety of...
, whom acquired BAX Global
BAX Global
BAX Global is an international shipping company that is headquartered in Irvine, California, and has other major offices in Australia, Singapore, London, the Netherlands and Toledo, Ohio. The company which was founded in 1971 also operates an airline...
, an international air cargo company, from 1993 until September 2011. DB Schenker leased a 300000 square feet (27,870.9 m²) warehouse facility with direct access to the runways at Toledo Express. They operated approximately 20 flights on average (with a peak of 42) per night from across the United States. Toledo Express was the 22nd busiest cargo hub in North America in 2009 with 241,472 tons handled.

Toledo Express Airport covers 2345 acres (949 ha) and has two runway
Runway
According to ICAO a runway is a "defined rectangular area on a land aerodrome prepared for the landing and take-off of aircraft." Runways may be a man-made surface or a natural surface .- Orientation and dimensions :Runways are named by a number between 01 and 36, which is generally one tenth...
s:

Toledo has had a few air service announcements made that never materialized or were dropped prior to being operated.