Encyclopedia
Tocharian or Tokharian is an extinct branch of the Indo-European language family. The name is taken from the people known to the Greeks (Ptolemy
Ptolemy
Claudius Ptolemy , was a Roman citizen of Egypt who wrote in Greek. He was a mathematician, astronomer, geographer, astrologer, and poet of a single epigram in the Greek Anthology. He lived in Egypt under Roman rule, and is believed to have been born in the town of Ptolemais Hermiou in the...
VI, 11, 6) as the Tocharians
Tocharians
The Tocharians were the Tocharian-speaking inhabitants of the Tarim Basin, making them the easternmost speakers of Indo-European languages in antiquity. They were known as, or at least closely related to, the Yuezhi of Chinese sources...
. These are sometimes identified with the Yuezhi
Yuezhi
The Yuezhi, or Rouzhi , also known as the Da Yuezhi or Da Rouzhi , were an ancient Central Asian people....
and the Kushans. The term Tokharistan usually refers to 1st millennium
1st millennium
File:1st millennium montage.png|From left, clockwise: Depiction of Jesus, the central figure in Christianity; The Colosseum, a landmark of the once Roman Empire; Gunpowder is invented during the latter part of the millennium, in China; Chess, a new board game, takes on popularity across the globe;...
Bactria
Bactria
Bactria and also appears in the Zend Avesta as Bukhdi. It is the ancient name of a historical region located between south of the Amu Darya and west of the Indus River...
, which the Kushans ruled. A Turkic text refers to the Turfanian language (Tocharian A) as twqry. Interpretation is difficult, but Friedrich W. K. Müller has associated this with the name of the Bactrian Tokharoi.

Today, mainly two branches of Tocharian are known: Tocharian A (Turfanian, Arsi, or East Tocharian) and Tocharian B (Kuchean or West Tocharian). Documents in these languages exist roughly from the 3rd to 9th centuries AD; before they became extinct, their speakers were either absorbed or exterminated by the expanding Uyghur
Uyghur people
The Uyghur are a Turkic ethnic group living in Eastern and Central Asia. Today, Uyghurs live primarily in the Xinjiang Uyghur Autonomous Region in the People's Republic of China...
tribes. Both languages were once spoken in the Tarim Basin
Tarim Basin
The Tarim Basin is a large endorheic basin occupying an area of about . It is located in the Xinjiang Uyghur Autonomous Region in China's far west. Its northern boundary is the Tian Shan mountain range and its southern is the Kunlun Mountains on the northern edge of the Tibetan Plateau. The...
in Central Asia
Central Asia
Central Asia is a core region of the Asian continent from the Caspian Sea in the west, China in the east, Afghanistan in the south, and Russia in the north...
, now part of the Xinjiang
Xinjiang
Xinjiang is an autonomous region of the People's Republic of China. It is the largest Chinese administrative division and spans over 1.6 million km2...
Autonomous Region of China
China
Chinese civilization may refer to:* China for more general discussion of the country.* Chinese culture* Greater China, the transnational community of ethnic Chinese.* History of China* Sinosphere, the area historically affected by Chinese culture...
.

Note that the above consonantal values are largely based on the writing of Sanskrit/Prakrit loanwords. A retroflex value for /ʂ/ is particularly suspect as it is derived from palatalized /s/; it was probably a low-frequency sibilant /ʃ/ (like German spelling sch), as opposed to the higher-frequency sibilant /ɕ/ (like Mandarin Pinyin
Pinyin
Pinyin is the official system to transcribe Chinese characters into the Roman alphabet in China, Malaysia, Singapore and Taiwan. It is also often used to teach Mandarin Chinese and spell Chinese names in foreign publications and used as an input method to enter Chinese characters into...
spelling x). 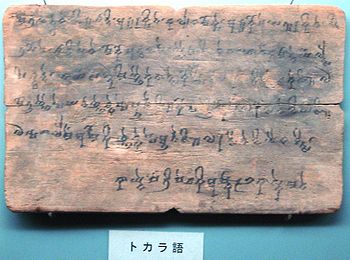 Tocharian is documented in manuscript fragments, mostly from the 8th century (with a few earlier ones) that were written on palm leaves, wooden tablets and Chinese paper
Paper
Paper is a thin material mainly used for writing upon, printing upon, drawing or for packaging. It is produced by pressing together moist fibers, typically cellulose pulp derived from wood, rags or grasses, and drying them into flexible sheets....
, preserved by the extremely dry climate of the Tarim Basin. Samples of the language have been discovered at sites in Kucha
Kucha
Kuchaor Kuche Uyghur , Chinese Simplified: 库车; Traditional: 庫車; pinyin Kùchē; also romanized as Qiuzi, Qiuci, Chiu-tzu, Kiu-che, Kuei-tzu from the traditional Chinese forms 屈支 屈茨; 龜玆; 龟兹, 丘玆, also Po ; Sanskrit: Kueina, Standard Tibetan: Kutsahiyui was an ancient Buddhist kingdom...
and Karasahr
Karasahr
Yanqi , or Karasahr , is an ancient town on the Silk Road and capital of Yanqi Hui Autonomous County in the Bayin'gholin Mongol Autonomous Prefecture of Xinjiang, in northwestern China...
, including many mural inscriptions.

Tocharian A and B are not intercomprehensible. Properly speaking, based on the tentative interpretation of twqry as related to Tokharoi, only Tocharian A may be referred to as Tocharian, while Tocharian B could be called Kuchean (its native name may have been kuśiññe), but since their grammars are usually treated together in scholarly works, the terms A and B have proven useful. A common Proto-Tocharian language must precede the attested languages by several centuries, probably dating to the 1st millennium BC
1st millennium BC
The 1st millennium BC encompasses the Iron Age and sees the rise of many successive empires, and spanned from 1000 BC to 1 BC.The Neo-Assyrian Empire, followed by the Achaemenids. In Greece, Classical Antiquity begins with the colonization of Magna Graecia and peaks with the rise of Hellenism. The...
. Given the small geographical range of and the lack of secular texts in Tocharian A, it might alternatively have been a liturgical language, the relationship between the two being similar to that between Classical Chinese
Classical Chinese
Classical Chinese or Literary Chinese is a traditional style of written Chinese based on the grammar and vocabulary of ancient Chinese, making it different from any modern spoken form of Chinese...
and Mandarin
Standard Mandarin
Standard Chinese or Modern Standard Chinese, also known as Mandarin or Putonghua, is the official language of the People's Republic of China and Republic of China , and is one of the four official languages of Singapore....
. However, the lack of a secular corpus in Tocharian A is by no means definite, due to the fragmentary preservation of Tocharian texts in general.

In 1998, Chinese linguist Ji Xianlin
Ji Xianlin
Ji Xianlin was a Chinese Indologist, linguist, paleographer, historian, and writer who had been honored by the governments of both India and China. He was born in Qingping County, now Linqing, and died in the No. 301 Hospital, Beijing.-Biography:Ji attended Sanhejie Primary School and the No. 1...
published a translation and analysis of fragments of a Tocharian Maitreyasamiti-Nataka discovered in 1974 in Yanqi.

Tocharian has completely re-worked the nominal
Noun
In linguistics, a noun is a member of a large, open lexical category whose members can occur as the main word in the subject of a clause, the object of a verb, or the object of a preposition .Lexical categories are defined in terms of how their members combine with other kinds of...
declension
Declension
In linguistics, declension is the inflection of nouns, pronouns, adjectives, and articles to indicate number , case , and gender...
system of Proto-Indo-European. The only cases inherited from the proto-language are nominative, genitive, and accusative
Accusative case
The accusative case of a noun is the grammatical case used to mark the direct object of a transitive verb. The same case is used in many languages for the objects of prepositions...
; in Tocharian the old accusative is known as the oblique case. In addition to these three cases, however, each Tocharian language has six cases formed by the addition of an invariant suffix to the oblique case. For example, the Tocharian A word "teacher" is declined as follows: 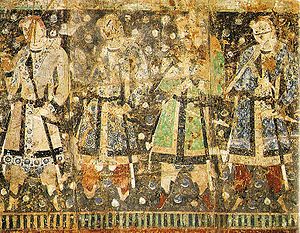 The existence of the Tocharian languages and alphabet was not even suspected until archaeological exploration of the Tarim basin by Aurel Stein in the early 20th century brought to light fragments of manuscripts in an unknown language.

This language, now known as Tocharian, turned out to belong to a hitherto unknown branch of Indo-European. The discovery of Tocharian has upset some theories about the relations of Indo-European languages and revitalized their study.

Tocharian probably died out after 840, when the Uyghurs
Uyghur people
The Uyghur are a Turkic ethnic group living in Eastern and Central Asia. Today, Uyghurs live primarily in the Xinjiang Uyghur Autonomous Region in the People's Republic of China...
were expelled from Mongolia by the Kyrgyz, retreating to the Tarim Basin. This theory is supported by the discovery of translations of Tocharian texts into Uyghur. During Uyghur rule, the peoples mixed with the Uyghurs to produce much of the modern population of what is now Xinjiang
Xinjiang
Xinjiang is an autonomous region of the People's Republic of China. It is the largest Chinese administrative division and spans over 1.6 million km2...
.


Comparison to other Indo-European languages