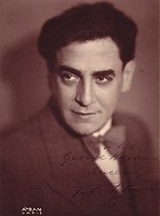 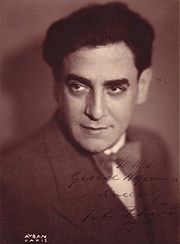 Tito Schipa was an Italian
Italy
Italy , officially the Italian Republic languages]] under the European Charter for Regional or Minority Languages. In each of these, Italy's official name is as follows:;;;;;;;;), is a unitary parliamentary republic in South-Central Europe. To the north it borders France, Switzerland, Austria and...
tenor
Tenor
The tenor is a type of male singing voice and is the highest male voice within the modal register. The typical tenor voice lies between C3, the C one octave below middle C, to the A above middle C in choral music, and up to high C in solo work. The low extreme for tenors is roughly B2...
. He is considered one of the finest tenori di grazia
Tenore di grazia
Leggiero Tenor, also called tenor leggiero or tenore di grazia, is a lightweight, flexible tenor type of voice. The tenor roles written in the early 19th century Italian operas are invariably leggiero tenor roles, especially those by Rossini such as Lindoro in L'italiana in Algeri, Don Ramiro in La...
in operatic history. He was endowed with a natural, sensuous voice which he deployed with great intelligence and taste.

Schipa was born Raffaele Attilio Amedeo Schipa in Lecce
Lecce
Lecce is a historic city of 95,200 inhabitants in southern Italy, the capital of the province of Lecce, the second province in the region by population, as well as one of the most important cities of Puglia...
into an Arbëreshë
Arbëreshë
The Arbëreshë are a linguistic and ethnic Albanian minority community living in southern Italy, especially the regions of Apulia, Basilicata, Molise, Calabria and Sicily...
family; his birthday was recorded as January 2, 1889 for military conscription purposes. http://www.titoschipa.it/biosrengl.htm He studied in Milan
Milan
Milan is the second-largest city in Italy and the capital city of the region of Lombardy and of the province of Milan. The city proper has a population of about 1.3 million, while its urban area, roughly coinciding with its administrative province and the bordering Province of Monza and Brianza ,...
and made his operatic debut at age 21 in 1910 at Vercelli. He subsequently appeared throughout Italy and in Buenos Aires
Buenos Aires
Buenos Aires is the capital and largest city of Argentina, and the second-largest metropolitan area in South America, after São Paulo. It is located on the western shore of the estuary of the Río de la Plata, on the southeastern coast of the South American continent...
in Argentina
Argentina
Argentina , officially the Argentine Republic , is the second largest country in South America by land area, after Brazil. It is constituted as a federation of 23 provinces and an autonomous city, Buenos Aires...
. In 1917, he created the role of Ruggiero in Puccini
Giacomo Puccini
Giacomo Antonio Domenico Michele Secondo Maria Puccini was an Italian composer whose operas, including La bohème, Tosca, Madama Butterfly, and Turandot, are among the most frequently performed in the standard repertoire...
's La rondine
La rondine
La rondine is an opera in three acts by Giacomo Puccini to an Italian libretto by Giuseppe Adami, based on a libretto by Alfred Maria Willner and Heinz Reichert...
.

In 1919, Schipa travelled to the United States
United States
The United States of America is a federal constitutional republic comprising fifty states and a federal district...
, joining the Chicago Opera Company
Lyric Opera of Chicago
Lyric Opera of Chicago is one of the leading opera companies in the United States. It was founded in Chicago in 1952, under the name 'Lyric Theatre of Chicago' by Carol Fox, Nicolà Rescigno and Lawrence Kelly, with a season that included Maria Callas's American debut in Norma...
. He remained with the Chicago company until 1932, whereupon he appeared at the New York Metropolitan Opera
Metropolitan Opera
The Metropolitan Opera is an opera company, located in New York City. Originally founded in 1880, the company gave its first performance on October 22, 1883. The company is operated by the non-profit Metropolitan Opera Association, with Peter Gelb as general manager...
from 1932 to 1935, and again in 1941. He also sang at the San Francisco Opera
San Francisco Opera
San Francisco Opera is an American opera company, based in San Francisco, California.It was founded in 1923 by Gaetano Merola and is the second largest opera company in North America...
, beginning in 1924.

From 1929 to 1949 he performed regularly in Italy, including at La Scala
La Scala
La Scala , is a world renowned opera house in Milan, Italy. The theatre was inaugurated on 3 August 1778 and was originally known as the New Royal-Ducal Theatre at La Scala...
, Milan
Milan
Milan is the second-largest city in Italy and the capital city of the region of Lombardy and of the province of Milan. The city proper has a population of about 1.3 million, while its urban area, roughly coinciding with its administrative province and the bordering Province of Monza and Brianza ,...
and the Rome Opera. He returned to Buenos Aires to sing in 1954. In 1957, he toured the USSR.

Schipa's artistry is preserved on film. For example, in 1929 he appeared in a Vitaphone
Vitaphone
Vitaphone was a sound film process used on feature films and nearly 1,000 short subjects produced by Warner Bros. and its sister studio First National from 1926 to 1930. Vitaphone was the last, but most successful, of the sound-on-disc processes...
movie short, singing "M'appari tutt'amor" from Flotow's opera Martha
Martha (opera)
Martha, oder Der Markt zu Richmond is a 'romantic comic' opera in four acts by Friedrich von Flotow, set to a German libretto by Friedrich Wilhelm Riese and based on a story by Jules-Henri Vernoy de Saint-Georges....
.

Schipa's stage repertoire, which in his early career had encompassed a wide range of Verdi and Puccini roles, eventually contracted to about 20 congenial Italian and French operatic roles, including Massenet's Werther
Werther
Werther is an opera in four acts by Jules Massenet to a French libretto by Édouard Blau, Paul Milliet and Georges Hartmann based on the German epistolary novel The Sorrows of Young Werther by Johann Wolfgang von Goethe....
, Donizetti's L'Elisir d'Amore
L'elisir d'amore
L'elisir d'amore is an opera by the Italian composer Gaetano Donizetti. It is a melodramma giocoso in two acts...
and Cilea's L'Arlesiana. In concert, Schipa performed a preferred array of lyrical operatic arias and songs, including Neapolitan and Spanish popular songs. He delivered each of them with an infectious spirit and a refined sense of style.

Schipa made numerous audio recordings of arias and songs during his career, beginning in Italy in 1913. His recorded output included a famous 78-rpm set of Donizetti's
Gaetano Donizetti
Domenico Gaetano Maria Donizetti was an Italian composer from Bergamo, Lombardy. His best-known works are the operas L'elisir d'amore , Lucia di Lammermoor , and Don Pasquale , all in Italian, and the French operas La favorite and La fille du régiment...
Don Pasquale
Don Pasquale
Don Pasquale is an opera buffa, or comic opera, in three acts by Gaetano Donizetti. The librettist Giovanni Ruffini wrote the Italian language libretto after Angelo Anelli's libretto for Stefano Pavesi's Ser Marcantonio ....
, made in 1932. This was one of the earliest complete opera recordings and it is still in circulation on CD.

Like his contemporary Richard Tauber
Richard Tauber
Richard Tauber was an Austrian tenor acclaimed as one of the greatest singers of the 20th century. Some critics commented that "his heart felt every word he sang".-Early life:...
, Tito Schipa was an early exponent of that rare breed of tenor who also conducts. (Latterly, Plácido Domingo
Plácido Domingo
Plácido Domingo KBE , born José Plácido Domingo Embil, is a Spanish tenor and conductor known for his versatile and strong voice, possessing a ringing and dramatic tone throughout its range...
carries on that tradition.) Although some contemporary critics considered Schipa's voice to be small in size, restricted in range and slightly husky in timbre, he was still capable of provoking intense public outpourings of support among his legion of fans. These fans were enthralled by Schipa's superior musicianship, as well as by his winning personality and his ability to breathe life into even the most trite song or hackneyed aria. Michael Scott (Record of Singing: 1978) whilst admiring Schipa's charm and taste point out that it is not correct to say that Schipa was a master of bel canto; indeed Scott and others regard Schipa's recording of Il mio tesoro from Don Giovanni as one of the worst ever made, with sloppy runs and sketchy ornamentation. To be fair Schipa himself did not claim to be an exponent of the bel canto style.

Schipa retired from the operatic stage in 1958, (although he undertook concert engagements until 1962,) to teach voice, firstly in Budapest
Budapest
Budapest is the capital of Hungary. As the largest city of Hungary, it is the country's principal political, cultural, commercial, industrial, and transportation centre. In 2011, Budapest had 1,733,685 inhabitants, down from its 1989 peak of 2,113,645 due to suburbanization. The Budapest Commuter...
. He died from diabetes in 1965 at the age of 77 in New York City
New York City
New York is the most populous city in the United States and the center of the New York Metropolitan Area, one of the most populous metropolitan areas in the world. New York exerts a significant impact upon global commerce, finance, media, art, fashion, research, technology, education, and...
, while teaching there.