Encyclopedia
Tinsley Viaduct is a two-tier road bridge in Sheffield
Sheffield
Sheffield is a city and metropolitan borough of South Yorkshire, England. Its name derives from the River Sheaf, which runs through the city. Historically a part of the West Riding of Yorkshire, and with some of its southern suburbs annexed from Derbyshire, the city has grown from its largely...
, England
England
England is a country that is part of the United Kingdom. It shares land borders with Scotland to the north and Wales to the west; the Irish Sea is to the north west, the Celtic Sea to the south west, with the North Sea to the east and the English Channel to the south separating it from continental...
; the first of its kind in the UK. It carries the M1
M1 motorway
The M1 is a north–south motorway in England primarily connecting London to Leeds, where it joins the A1 near Aberford. While the M1 is considered to be the first inter-urban motorway to be completed in the United Kingdom, the first road to be built to motorway standard in the country was the...
and the A631
A631 road
The A631 is a road running from Sheffield, South Yorkshire to Louth, Lincolnshire in England. It passes through the counties of South Yorkshire, Nottinghamshire and Lincolnshire. The road has many towns on its route including Rotherham, Maltby, Gainsborough and Market Rasen. It is mostly single...
1033 metres over the Don Valley, from Tinsley
Tinsley, South Yorkshire
Tinsley is a suburb of northeastern part of Sheffield, South Yorkshire. Its name derives from the Old English Tingas-Leah, which means 'Field of Council'...
to Wincobank, also crossing the Sheffield Canal
Sheffield Canal
The Sheffield Canal is a canal in the City of Sheffield, England. It runs from Tinsley, where it leaves the River Don, to the Sheffield Canal Basin in the city centre, passing through 11 locks.- Early history :...
, the Midland Main Line
Midland Main Line
The Midland Main Line is a major railway route in the United Kingdom, part of the British railway system.The present-day line links London St...
and the former South Yorkshire Railway
South Yorkshire Railway
The South Yorkshire Railway was a railway company which was based in the south of the former West Riding of Yorkshire, England. Its first section of line opened on 10 November 1849 between Swinton Junction and Doncaster...
line from Tinsley Junction to Rotherham Central. The Supertram
Sheffield Supertram
The Supertram, officially called the Stagecoach Supertram, is a light rail tram system in the City of Sheffield, South Yorkshire, England...
route to Meadowhall runs below part of the viaduct on the trackbed of the South Yorkshire Railway line to Barnsley
Barnsley
Barnsley is a town in South Yorkshire, England. It lies on the River Dearne, north of the city of Sheffield, south of Leeds and west of Doncaster. Barnsley is surrounded by several smaller settlements which together form the Metropolitan Borough of Barnsley, of which Barnsley is the largest and...
.

The viaduct
Viaduct
A viaduct is a bridge composed of several small spans. The term viaduct is derived from the Latin via for road and ducere to lead something. However, the Ancient Romans did not use that term per se; it is a modern derivation from an analogy with aqueduct. Like the Roman aqueducts, many early...
was opened in March 1968 and cost £6 million to build. The structure is unusual in that it is built as steel
Steel
Steel is an alloy that consists mostly of iron and has a carbon content between 0.2% and 2.1% by weight, depending on the grade. Carbon is the most common alloying material for iron, but various other alloying elements are used, such as manganese, chromium, vanadium, and tungsten...
box girders, at a time when most long span bridges were being built of post tension concrete
Concrete
Concrete is a composite construction material, composed of cement and other cementitious materials such as fly ash and slag cement, aggregate , water and chemical admixtures.The word concrete comes from the Latin word...
deck design. This use of steel has allowed the viaduct to be strengthened, in 1983 and again in 2006. The recent works to strengthen the bridge were a very complex operation, with a lot of the work happening inside the box beam spine. The works took over 3 years and cost £82 million (14 times the original bridge building cost).

Although originally designed to carry 6 lanes, during the strengthening work the M1 was permanently reduced to 4 lanes following an EU
European Union
The European Union is an economic and political union of 27 independent member states which are located primarily in Europe. The EU traces its origins from the European Coal and Steel Community and the European Economic Community , formed by six countries in 1958...
directive on load bearing capacity to allow for the introduction of 40 ton trucks in the UK. This arrangement allows the third lane in each direction to join from Junction 34 to make the very busy junction safer.

The viaduct is balanced on rollers to allow for thermal expansion and contraction, and the route weaves slightly in order to make its way past obstacles. The viaduct, due to its construction, is very flexible. Movement may be felt on the lower deck as the traffic passes overhead. The Meadowhall Shopping Centre lies in the valley to the west; to the east is the Blackburn Meadows
Blackburn Meadows
Blackburn Meadows is an area of land in England, just inside the Sheffield city border at Tinsley, which became the location of the main sewage treatment works for the city in 1884...
sewage works
Sewage treatment
Sewage treatment, or domestic wastewater treatment, is the process of removing contaminants from wastewater and household sewage, both runoff and domestic. It includes physical, chemical, and biological processes to remove physical, chemical and biological contaminants...
. 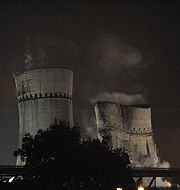 The viaduct is one of Sheffield's most prominent landmarks, and was once made all the more so by the adjacent pair of cooling tower
Cooling tower
Cooling towers are heat removal devices used to transfer process waste heat to the atmosphere. Cooling towers may either use the evaporation of water to remove process heat and cool the working fluid to near the wet-bulb air temperature or in the case of closed circuit dry cooling towers rely...
s that were left standing for safety reasons after the demolition of the Blackburn Meadows Power Station
Blackburn Meadows Power Station
Blackburn Meadows Power Station was a coal-fired power station situated on the River Don, between Sheffield and Rotherham. It is well known for its two iconic cooling towers which were demolished on 24 August 2008.-History:...
. The cooling towers were a major point of contention over the years and were once saved from destruction only after being chosen as a nesting site by a rare bird. More recently, plans were made to turn them into a piece of public art. Other plans for the towers included concert halls, skate parks and a theme park.

Their iconic status, and the possibly prohibitive costs of demolishing the towers safely, until recently looked to have cemented their status in Sheffield's future as much as they were a part of its history, until the owner of the tower (and the now-demolished power station) E.ON UK
E.ON UK
E.ON UK is an energy company in the United Kingdom and a subsidiary of E.ON, the world's largest investor-owned power and gas company. As Powergen, it was listed on the London Stock Exchange and was once a constituent of the FTSE 100 Index but since 1 July 2002 has been owned by E.ON AG of...
, stated its intention to demolish them once the strengthening of the viaduct made it feasible.

The 250 feet (76 m) towers were demolished at 03:00 BST on 24 August 2008 though a significant portion of the north tower remained standing for a short while. The demolition attracted widespread attention. A viewing platform was set up so the public could watch the demolition. Part of the site is proposed to be used for a new biomass
Biomass
Biomass, as a renewable energy source, is biological material from living, or recently living organisms. As an energy source, biomass can either be used directly, or converted into other energy products such as biofuel....
power station
Power station
A power station is an industrial facility for the generation of electric energy....
by the owners E.ON UK
E.ON UK
E.ON UK is an energy company in the United Kingdom and a subsidiary of E.ON, the world's largest investor-owned power and gas company. As Powergen, it was listed on the London Stock Exchange and was once a constituent of the FTSE 100 Index but since 1 July 2002 has been owned by E.ON AG of...
.