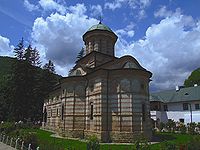 Cozia Monastery, erected close to Călimănești by Mircea cel Bătrân in 1388 and housing his tomb, is one of the most valuable monuments of national medieval art and architecture in Romania
Romania
Romania is a country located at the crossroads of Central and Southeastern Europe, on the Lower Danube, within and outside the Carpathian arch, bordering on the Black Sea...
.

Wall facets' decorations with original stone rosette
Rosette (design)
A rosette is a round, stylized flower design, used extensively in sculptural objects from antiquity. Appearing in Mesopotamia and used to decorate the funeral stele in Ancient Greece...
s and frames display early Byzantine
Byzantine Empire
The Byzantine Empire was the Eastern Roman Empire during the periods of Late Antiquity and the Middle Ages, centred on the capital of Constantinople. Known simply as the Roman Empire or Romania to its inhabitants and neighbours, the Empire was the direct continuation of the Ancient Roman State...
influence.

Of great value is the hospital church, 'bolnița' (1543), with original well-preserved indoor frescoes like the votive portrait of ruler Mircea cel Bătrân and his sons.

The church of the monastery was put on a stamp from the Romanian stamp in 1968. 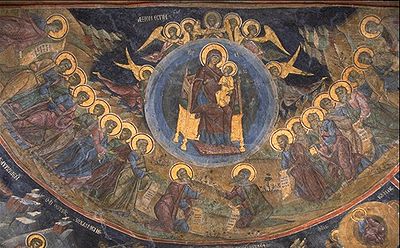