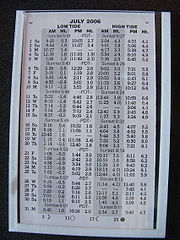 A tide table, sometimes called a tide chart, is used for tidal prediction
Tide
Tides are the rise and fall of sea levels caused by the combined effects of the gravitational forces exerted by the moon and the sun and the rotation of the Earth....
and shows the daily times and height of high water
High Water
High Water is an album by hip hop artist El-P, released on March 9, 2004 through Thirsty Ear Recordings.Made in conjunction with jazz pianist Matthew Shipp and the group for which he is artistic director, The Blue Series Continuum, the album is a striking departure from El-P's usual style, almost...
and low water for a particular location. Tide heights at intermediate times (between high and low water) can be approximately calculated using the rule of twelfths
Rule of twelfths
The Rule of Twelfths is a rule of thumb for estimating the height of the tide at any time, given only the time and height of high and low water...
or more accurately by using a published tidal curve for the location.

Tide tables are published as small booklets in their own right, as part of nautical almanac
Nautical almanac
A nautical almanac is a publication describing the positions of a selection of celestial bodies for the purpose of enabling navigators to use celestial navigation to determine the position of their ship while at sea...
s, on the Internet
Internet
The Internet is a global system of interconnected computer networks that use the standard Internet protocol suite to serve billions of users worldwide...
, in some newspaper
Newspaper
A newspaper is a scheduled publication containing news of current events, informative articles, diverse features and advertising. It usually is printed on relatively inexpensive, low-grade paper such as newsprint. By 2007, there were 6580 daily newspapers in the world selling 395 million copies a...
s (generally those serving readers in coastal regions or having maritime interests) and as the output of tidal prediction software.

Tide tables are only calculated and published for major commercial port
Port
A port is a location on a coast or shore containing one or more harbors where ships can dock and transfer people or cargo to or from land....
s called standard ports. The tides for nearby minor ports can be estimated by time and height differences between a "standard" port and these minor ports.

The dates of spring tides and neap tides, approximately seven days apart, can be determined by the heights of the tides on the tide table: a small range indicates neaps and large indicates springs.

On the Atlantic coast of northwest Europe
Europe
Europe is, by convention, one of the world's seven continents. Comprising the westernmost peninsula of Eurasia, Europe is generally 'divided' from Asia to its east by the watershed divides of the Ural and Caucasus Mountains, the Ural River, the Caspian and Black Seas, and the waterways connecting...
, the interval between each low and high tide averages about 6 hours and 10 minutes, giving two high tides and two low tides each day.