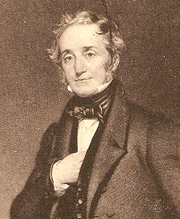 Thomas Cubitt born Buxton, Norfolk
Buxton, Norfolk
Buxton is a village in Norfolk, located between Norwich and Aylsham. The village is mentioned in the Domesday Book of 1085. Buxton is adjacent to the village of Lammas. The two villages are separated by the River Bure at Buxton Mill but are otherwise indistinguishable...
, was the leading master builder in London
London
London is the capital city of :England and the :United Kingdom, the largest metropolitan area in the United Kingdom, and the largest urban zone in the European Union by most measures. Located on the River Thames, London has been a major settlement for two millennia, its history going back to its...
in the second quarter of the 19th century, and also carried out several projects in other parts of England.

The son of a Norfolk
Norfolk
Norfolk is a low-lying county in the East of England. It has borders with Lincolnshire to the west, Cambridgeshire to the west and southwest and Suffolk to the south. Its northern and eastern boundaries are the North Sea coast and to the north-west the county is bordered by The Wash. The county...
carpenter, he journeyed to India
India
India , officially the Republic of India , is a country in South Asia. It is the seventh-largest country by geographical area, the second-most populous country with over 1.2 billion people, and the most populous democracy in the world...
as ship's carpenter from which he earned sufficient funds to start his own building firm in 1810 on Gray's Inn Road
Gray's Inn Road
Gray's Inn Road, formerly Gray's Inn Lane, is a major road in central London, in the London Borough of Camden. It is named after Gray's Inn, one of the main Inns of Court. The road starts in Holborn, near Chancery Lane tube station and the boundaries of the City of London and the London Borough...
, London
London
London is the capital city of :England and the :United Kingdom, the largest metropolitan area in the United Kingdom, and the largest urban zone in the European Union by most measures. Located on the River Thames, London has been a major settlement for two millennia, its history going back to its...
where he was one of the first builders to have a 'modern' system of employing all the trades under his own management. 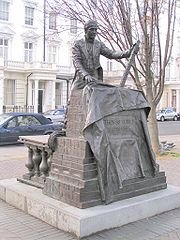 Cubitt's first major building was the London Institution
London Institution
The London Institution was an educational institution founded in London in 1806...
in Finsbury Circus
Finsbury Circus
Finsbury Circus is an elliptical square with its long axis lying east-west in the City of London, England; with an area of 2.2 hectares it is the largest public open space within the City's boundaries. It has an immaculately maintained Lawn Bowls club in the centre, which has existed in the gardens...
, built in 1815. After this he worked primarily on speculative housing at Camden Town
Camden Town
-Economy:In recent years, entertainment-related businesses and a Holiday Inn have moved into the area. A number of retail and food chain outlets have replaced independent shops driven out by high rents and redevelopment. Restaurants have thrived, with the variety of culinary traditions found in...
, Islington
Islington
Islington is a neighbourhood in Greater London, England and forms the central district of the London Borough of Islington. It is a district of Inner London, spanning from Islington High Street to Highbury Fields, encompassing the area around the busy Upper Street...
, and especially at Highbury Park
Highbury
- Early Highbury :The area now known as Islington was part of the larger manor of Tolentone, which is mentioned in the Domesday Book. Tolentone was owned by Ranulf brother of Ilger and included all the areas north and east of Canonbury and Holloway Road. The manor house was situated by what is now...
, Stoke Newington
Stoke Newington
Stoke Newington is a district in the London Borough of Hackney. It is north-east of Charing Cross.-Boundaries:In modern terms, Stoke Newington can be roughly defined by the N16 postcode area . Its southern boundary with Dalston is quite ill-defined too...
(now part of Islington
London Borough of Islington
The London Borough of Islington is a London borough in Inner London. It was formed in 1965 by merging the former metropolitan boroughs of Islington and Finsbury. The borough contains two Westminster parliamentary constituencies, Islington North and Islington South & Finsbury...
).

His development of areas of Bloomsbury
Bloomsbury
-Places:* Bloomsbury is an area in central London.* Bloomsbury , related local government unit* Bloomsbury, New Jersey, New Jersey, USA* Bloomsbury , listed on the NRHP in Maryland...
, including Gordon Square
Gordon Square
Gordon Square is in Bloomsbury, in the London Borough of Camden, London, England . It was developed by Thomas Cubitt in the 1820s, as one of a pair with Tavistock Square, which is a block away and has the same dimensions...
and Tavistock Square
Tavistock Square
Tavistock Square is a public square in Bloomsbury, in the London Borough of Camden with a fine garden.-Public art:The centre-piece of the gardens is a statue of Mahatma Gandhi, which was installed in 1968....
, began in 1820, for a group of landowners including the Duke of Bedford
Duke of Bedford
thumb|right|240px|William Russell, 1st Duke of BedfordDuke of Bedford is a title that has been created five times in the Peerage of England. The first creation came in 1414 in favour of Henry IV's third son, John, who later served as regent of France. He was made Earl of Kendal at the same time...
.

He was commissioned in 1824 by Richard Grosvenor, 2nd Marquess of Westminster
Richard Grosvenor, 2nd Marquess of Westminster
Richard Grosvenor, 2nd Marquess of Westminster KG, PC , styled Viscount Belgrave from 1802 to 1831 and Earl Belgrave from 1831 to 1845, was an English politician, landowner, property developer and benefactor....
, to create a great swathe of building in Belgravia
Belgravia
Belgravia is a district of central London in the City of Westminster and the Royal Borough of Kensington and Chelsea. Noted for its immensely expensive residential properties, it is one of the wealthiest districts in the world...
centred around Belgrave Square
Belgrave Square
Belgrave Square is one of the grandest and largest 19th century squares in London, England. It is the centrepiece of Belgravia, and was laid out by the property contractor Thomas Cubitt for the 2nd Earl Grosvenor, later the 1st Marquess of Westminster, in the 1820s. Most of the houses were occupied...
and Pimlico
Pimlico
Pimlico is a small area of central London in the City of Westminster. Like Belgravia, to which it was built as a southern extension, Pimlico is known for its grand garden squares and impressive Regency architecture....
, in what was to become his greatest achievement in London. Notable amongst this development are the north and west sides of Eaton Square
Eaton Square
Eaton Square is a residential garden square in London's Belgravia district. It is one of the three garden squares built by the Grosvenor family when they developed the main part of Belgravia in the 19th century, and is named after Eaton Hall, the Grosvenor country house in Cheshire...
, which exemplify Cubitt's style of building and design. His work in Belgrave Square was helped by the architect
Architect
An architect is a person trained in the planning, design and oversight of the construction of buildings. To practice architecture means to offer or render services in connection with the design and construction of a building, or group of buildings and the space within the site surrounding the...
Philip Hardwick
Philip Hardwick
Philip Hardwick was an eminent English architect, particularly associated with railway stations and warehouses in London and elsewhere...
(1792-1870) who designed Sefton House.

Cubitt was also responsible for the east front of Buckingham Palace
Buckingham Palace
Buckingham Palace, in London, is the principal residence and office of the British monarch. Located in the City of Westminster, the palace is a setting for state occasions and royal hospitality...
. He also built and personally funded nearly a kilometre of the Thames Embankment
Thames Embankment
The Thames Embankment is a major feat of 19th century civil engineering designed to reclaim marshy land next to the River Thames in central London. It consists of the Victoria and Chelsea Embankment....
. He was employed in the large development of Kemp Town
Kemp Town
Kemp Town is a 19th Century residential estate in the east of Brighton in East Sussex, England, UK. Kemp Town was conceived and financed by Thomas Read Kemp. It has given its name to the larger Kemptown region of Brighton....
in Brighton
Brighton
Brighton is the major part of the city of Brighton and Hove in East Sussex, England on the south coast of Great Britain...
, and Osborne House
Osborne House
Osborne House is a former royal residence in East Cowes, Isle of Wight, UK. The house was built between 1845 and 1851 for Queen Victoria and Prince Albert as a summer home and rural retreat....
on the Isle of Wight
Isle of Wight
The Isle of Wight is a county and the largest island of England, located in the English Channel, on average about 2–4 miles off the south coast of the county of Hampshire, separated from the mainland by a strait called the Solent...
, completed in 1851. Cubitt's public works included the provision of public parks, including being an organiser of the Battersea Park
Battersea Park
Battersea Park is a 200 acre green space at Battersea in the London Borough of Wandsworth in England. It is situated on the south bank of the River Thames opposite Chelsea, and was opened in 1858....
Scheme and a guarantor of the Great Exhibition of 1851, and contributing to the Metropolitan Building Act 1855.

In 1827 he withdrew from the management of the business he had established at Gray's Inn Road
Gray's Inn Road
Gray's Inn Road, formerly Gray's Inn Lane, is a major road in central London, in the London Borough of Camden. It is named after Gray's Inn, one of the main Inns of Court. The road starts in Holborn, near Chancery Lane tube station and the boundaries of the City of London and the London Borough...
leaving such matters to his brother William Cubitt; the firm of Cubitts still carried out the work of Thomas Cubitt and the change robbed neither of the partners of the credit for their work.

He died in 1855 and was taken from Dorking for burial at West Norwood Cemetery
West Norwood Cemetery
West Norwood Cemetery is a cemetery in West Norwood in London, England. It was also known as the South Metropolitan Cemetery.One of the first private landscaped cemeteries in London, it is one of the Magnificent Seven cemeteries of London, and is a site of major historical, architectural and...
on 27 December 1855. After his death, Queen Victoria
Victoria of the United Kingdom
Victoria was the monarch of the United Kingdom of Great Britain and Ireland from 20 June 1837 until her death. From 1 May 1876, she used the additional title of Empress of India....
said "In his sphere of life, with the immense business he had in hand, he is a real national loss. A better, kindhearted or more simple, unassuming man never breathed." Another statue of Cubitt can be seen in Dorking
Dorking
Dorking is a historic market town at the foot of the North Downs approximately south of London, in Surrey, England.- History and development :...
, opposite the Dorking Halls, as he was favoured there for his architecture on his Denbies estate
Denbies Wine Estate
Denbies Wine Estate near Dorking, Surrey has the largest vineyard in England with under vines, representing over 10% of the plantings in the whole of the United Kingdom. It has a visitors' centre which attracts around 300,000 visitors a year....
.

Cubitt had two brothers, the politician William and the architect Lewis
Lewis Cubitt
Lewis Cubitt was born on 29 September 1799 and died on 9 June 1883. He married Sophia Kendall on 23 January 1830.He was the younger brother of Thomas Cubitt, the leading master builder in London in the second quarter of the 19th century, and he designed many of the housing developments constructed...
who designed many of the houses built by Thomas.