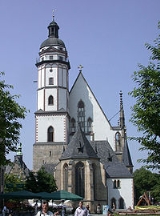 Encyclopedia
The Thomanerchor is a boys' choir
Boys' choir
A boys' choir is a choir primarily made up of choirboys who have yet to begin puberty or are in the early to middle stages of puberty and so retain their more highly pitched childhood voice type...
in Leipzig
Leipzig
Leipzig Leipzig has always been a trade city, situated during the time of the Holy Roman Empire at the intersection of the Via Regia and Via Imperii, two important trade routes. At one time, Leipzig was one of the major European centres of learning and culture in fields such as music and publishing...
, Germany
Germany
Germany , officially the Federal Republic of Germany , is a federal parliamentary republic in Europe. The country consists of 16 states while the capital and largest city is Berlin. Germany covers an area of 357,021 km2 and has a largely temperate seasonal climate...
. The choir was founded in 1212. At present, the choir consists of 92 boys from 9 to 18 years of age. The members, called Thomaner, live in a boarding school
Boarding school
A boarding school is a school where some or all pupils study and live during the school year with their fellow students and possibly teachers and/or administrators. The word 'boarding' is used in the sense of "bed and board," i.e., lodging and meals...
, the Thomasalumnat, and attend Thomasschule zu Leipzig
Thomasschule zu Leipzig
St. Thomas School, Leipzig is a co-educational and public boarding school in Leipzig, Saxony, Germany. It was founded by the Augustinians in 1212 and is one of the oldest schools in the world.St. Thomas is known for its art, language and music education...
, a Gymnasium school
Gymnasium (school)
A gymnasium is a type of school providing secondary education in some parts of Europe, comparable to English grammar schools or sixth form colleges and U.S. college preparatory high schools. The word γυμνάσιον was used in Ancient Greece, meaning a locality for both physical and intellectual...
with a linguistic profile and a focus on musical education. The younger members attend the primary school 76. Grundschule in der Manetstraße. Johann Sebastian Bach
Johann Sebastian Bach
Johann Sebastian Bach was a German composer, organist, harpsichordist, violist, and violinist whose sacred and secular works for choir, orchestra, and solo instruments drew together the strands of the Baroque period and brought it to its ultimate maturity...
served as Thomaskantor
Thomaskantor
The Thomaskantor is the musical director of the Thomanerchor in Leipzig, founded in 1212. He is appointed by Leipzig's city council and his duties are to lead the weekly services called Motette, Sunday services and other services in the Thomaskirche, also to conduct recordings and tours.Johann...
, director of the choir, from 1723 to 1750. 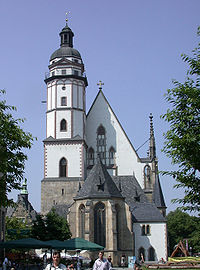 The Forum Thomanum is a meeting place in the Bach Quarter of Leipzig. The construction has already began and it will be a big musical campus with the Thomasalumnat, Kindergarten, Primary School, High School, Choir, Luther Church, Youth hostel, Administration buildings, gym, a rehearsal hall and more amenities. There are some critical voices as well, that the Forum Thomanum project will change the way that the Thomaner are instructed and recruited.

Most of the 93 members of the Thomanerchor live in the Thomasalumnat in Hiller street. The boys are separated in Stuben and not school classes or groups. One Stube is not only a sleeping room, but also an administrative entity with a closed hierarchy and a clear assignment of tasks. There's always an older choir boy with younger ones in each Stube in order to create a hierarchy and didactic relationship. Hence, the education on the Thomanerchor is enforced by the older members and the teachers don't really play a big role. Therefore, it is possible that only 5 teachers look after 90 children. Every year the Stuben are distributed again, the ages of the children are considered for the changes and the possibility to influence the social order on the Stube.

The Stuben have only lockable wardrobes (Köte) and one table for each boy. There are also other furnishings, namely shelves, for books, newspapers and satchels, radios, plants and chairs. Televisions and computers are not allowed and every room has about 10 beds.

The Thomasalumnat also has a gym, a rehearsal hall, and a dining-hall where all boys eat together thrice per day, a shop where the tailor sews the boys' suits for the concerts, an archive, a wing of the building for the teachers who live there, a room for the band, a model railway room, a fitness room, a living-room for the older boys, a "press room" for the school's newspaper, a sauna, a library with computers and internet, an infirmary, and a television room. Restrooms are not available for every boy: restrooms are on the hallway for the whole Stube. There are only two shower rooms for all boys.

The Thomanerchor offers concerts across all of Germany (at least two big tours a year) and abroad. The choir also sings three times a week in the Thomaskirche, "Motette" every Friday evening at 6 and every Saturday afternoon at 3, service on Sundays at 9 o'clock. The choir also sings at Protestant festivities. The children have vacations during the summer school vacations.

The tour of 2011, the choir's 800th year, presents a program of Scarlatti
Alessandro Scarlatti
Alessandro Scarlatti was an Italian Baroque composer especially famous for his operas and chamber cantatas. He is considered the founder of the Neapolitan school of opera. He was the father of two other composers, Domenico Scarlatti and Pietro Filippo Scarlatti.-Life:Scarlatti was born in...
's Exultate Deo, Kyrie and Gloria from Palestrina
Giovanni Pierluigi da Palestrina
Giovanni Pierluigi da Palestrina was an Italian Renaissance composer of sacred music and the best-known 16th-century representative of the Roman School of musical composition...
's Missa sine nomine, Bruckner
Anton Bruckner
Anton Bruckner was an Austrian composer known for his symphonies, masses, and motets. The first are considered emblematic of the final stage of Austro-German Romanticism because of their rich harmonic language, complex polyphony, and considerable length...
's motet
Motet
In classical music, motet is a word that is applied to a number of highly varied choral musical compositions.-Etymology:The name comes either from the Latin movere, or a Latinized version of Old French mot, "word" or "verbal utterance." The Medieval Latin for "motet" is motectum, and the Italian...
s Vexilla regis and Christus factus est pro nobis, and Bach's motet Jesu, meine Freude, performed for example on 6 July in the Eberbach Abbey
Eberbach Abbey
Eberbach Abbey is a former Cistercian monastery near Eltville am Rhein in the Rheingau, Germany. On account of its impressive Romanesque and early Gothic buildings it is considered one of the most significant architectural heritage sites in Hesse, Germany...
at the Rheingau Musik Festival
Rheingau Musik Festival
The Rheingau Musik Festival is an international summer music festival in Germany, founded in 1987. It is mostly for classical music, but includes other genres...
.

The Margrave of Meissen founded St. Thomas' priory for Augustinian Canons (Augustiner-Chorherrenstift zu St. Thomas) in 1212. A school was annexed to the monastery, the intended purpose of which was to develop future priests. Since the Reformation
Protestant Reformation
The Protestant Reformation was a 16th-century split within Western Christianity initiated by Martin Luther, John Calvin and other early Protestants. The efforts of the self-described "reformers", who objected to the doctrines, rituals and ecclesiastical structure of the Roman Catholic Church, led...
in 1539, the school and the choir have belonged to the city of Leipzig; it is also influenced by the Protestant Church of Saxony
Saxony
The Free State of Saxony is a landlocked state of Germany, contingent with Brandenburg, Saxony Anhalt, Thuringia, Bavaria, the Czech Republic and Poland. It is the tenth-largest German state in area, with of Germany's sixteen states....
. This makes the Thomanerchor the oldest cultural entity in the city and one of the oldest in Europe. When Johann Sebastian Bach
Johann Sebastian Bach
Johann Sebastian Bach was a German composer, organist, harpsichordist, violist, and violinist whose sacred and secular works for choir, orchestra, and solo instruments drew together the strands of the Baroque period and brought it to its ultimate maturity...
served as director, the choir only had 16 boys. After Bach's death, other famous musicians served as director, among them Doles
Johann Friedrich Doles
Johann Friedrich Doles was a German composer and pupil of J.S. Bach.Doles was born in Steinbach-Hallenberg. He attended the University of Leipzig...
, Hiller and Moritz Hauptmann
Moritz Hauptmann
Moritz Hauptmann , was a German music theorist, teacher and composer.Hauptmann was born in Dresden, and studied violin under Scholz, piano under Franz Lanska, composition under Grosse and Francesco Morlacchi,...
.

By the end of the 19th century, the Thomasschule next to the Thomaskirche was demolished and the choir moved to the Hiller street, now the Leipziger "Music Quarter". During the Nazi era, the choir was incorporated into the Hitler Jugend in 1937. But the Nazi government did not succeed in infiltrating their ideology into the choir's repertoire because the then director Ramin concentrated on religious works. He also tried to prevent the boys from being enlisted as long as possible.

Cantors of the Thomanerchor, called Thomaskantor in German, have included (in brackets their time in the office):