Encyclopedia
The tholeiitic magma series is one of two main magma series in igneous rocks, the other magma series being the calc–alkaline. A magma series is a series of compositions that describes the evolution of a mafic
Mafic
Mafic is an adjective describing a silicate mineral or rock that is rich in magnesium and iron; the term is a portmanteau of the words "magnesium" and "ferric". Most mafic minerals are dark in color and the relative density is greater than 3. Common rock-forming mafic minerals include olivine,...
magma, which is high in magnesium
Magnesium
Magnesium is a chemical element with the symbol Mg, atomic number 12, and common oxidation number +2. It is an alkaline earth metal and the eighth most abundant element in the Earth's crust and ninth in the known universe as a whole...
and iron
Iron
Iron is a chemical element with the symbol Fe and atomic number 26. It is a metal in the first transition series. It is the most common element forming the planet Earth as a whole, forming much of Earth's outer and inner core. It is the fourth most common element in the Earth's crust...
and produces basalt
Basalt
Basalt is a common extrusive volcanic rock. It is usually grey to black and fine-grained due to rapid cooling of lava at the surface of a planet. It may be porphyritic containing larger crystals in a fine matrix, or vesicular, or frothy scoria. Unweathered basalt is black or grey...
or gabbro
Gabbro
Gabbro refers to a large group of dark, coarse-grained, intrusive mafic igneous rocks chemically equivalent to basalt. The rocks are plutonic, formed when molten magma is trapped beneath the Earth's surface and cools into a crystalline mass....
, as it fractionally crystallizes
Fractional crystallization
Fractional crystallization may refer to:* Fractional crystallization , a process to separate different solutes from a solution* Fractional crystallization , a natural process occurring in igneous rocks during which precipitation of minerals takes place...
to become a felsic
Felsic
The word "felsic" is a term used in geology to refer to silicate minerals, magma, and rocks which are enriched in the lighter elements such as silicon, oxygen, aluminium, sodium, and potassium....
magma, which is low in magnesium and iron and produces rhyolite
Rhyolite
This page is about a volcanic rock. For the ghost town see Rhyolite, Nevada, and for the satellite system, see Rhyolite/Aquacade.Rhyolite is an igneous, volcanic rock, of felsic composition . It may have any texture from glassy to aphanitic to porphyritic...
or granite
Granite
Granite is a common and widely occurring type of intrusive, felsic, igneous rock. Granite usually has a medium- to coarse-grained texture. Occasionally some individual crystals are larger than the groundmass, in which case the texture is known as porphyritic. A granitic rock with a porphyritic...
. The International Union of Geological Sciences recommends that tholeiitic basalt be used in preference to the term "tholeiite" (Le Maitre and others, 2002).

Rocks in the tholeiitic magma series are classified as subalkaline (they contain less sodium than some other basalts) and are distinguished from rocks in the calc-alkaline
Calc-alkaline
The calc-alkaline magma series is one of two main magma series in igneous rocks, the other magma series being the tholeiitic. A magma series is a series of compositions that describes the evolution of a mafic magma, which is high in magnesium and iron and produces basalt or gabbro, as it...
magma series by the redox
Redox
Redox reactions describe all chemical reactions in which atoms have their oxidation state changed....
state of the magma they crystallized from (tholeiitic magmas are reduced; calc-alkaline magmas are oxidized). When the parent magmas of basalts crystallize, they preferentially crystallize the more magnesium-rich and iron-poor forms of the silicate minerals olivine
Olivine
The mineral olivine is a magnesium iron silicate with the formula 2SiO4. It is a common mineral in the Earth's subsurface but weathers quickly on the surface....
and pyroxene
Pyroxene
The pyroxenes are a group of important rock-forming inosilicate minerals found in many igneous and metamorphic rocks. They share a common structure consisting of single chains of silica tetrahedra and they crystallize in the monoclinic and orthorhombic systems...
, causing the iron content of tholeiitic magmas to increase as the melt is depleted of iron-poor crystals. However, a calc-alkaline magma is oxidized enough to precipitate significant amounts of the iron oxide magnetite
Magnetite
Magnetite is a ferrimagnetic mineral with chemical formula Fe3O4, one of several iron oxides and a member of the spinel group. The chemical IUPAC name is iron oxide and the common chemical name is ferrous-ferric oxide. The formula for magnetite may also be written as FeO·Fe2O3, which is one part...
, causing the iron content of the magma to remain more steady as it cools than with a tholeiitic magma.

The difference between these two magma series can be seen on an AFM diagram, a ternary diagram showing the relative proportions of the oxides Na2O + K2O (A), FeO + Fe2O3 (F), and MgO (M). As magmas cool, they precipitate out significantly more iron and magnesium than alkali, causing the magmas to move towards the alkali corner as they cool. In the tholeiitic magma, as it cools and preferentially produces magnesium-rich crystals, the magnesium content of the magma plummets, causing the magma to move away from the magnesium corner until it runs low on magnesium and simply moves towards the alkali corner as it loses iron and any remaining magnesium. With the calc-alkaline series, however, the precipitation of magnetite causes the iron-magnesium ratio to remain relatively constant, so the magma moves in a straight line towards the alkali corner on the AFM diagram. 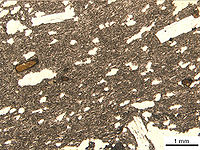 Like all basalt, the rock type is dominated by clinopyroxene plus plagioclase
Plagioclase
Plagioclase is an important series of tectosilicate minerals within the feldspar family. Rather than referring to a particular mineral with a specific chemical composition, plagioclase is a solid solution series, more properly known as the plagioclase feldspar series...
, with minor iron-titanium oxides.http://micro.magnet.fsu.edu/primer/techniques/polarized/gallery/pages/basalttholeiiticsmall.html Orthopyroxene or pigeonite
Pigeonite
Pigeonite is a mineral in the clinopyroxene group. It has a general formula of Si2O6. The calcium cation fraction can vary from 5% to 25%, with iron and magnesium making up the rest of the cations....
may also be present in tholeiitic basalt, and olivine, if present, may be rimmed by either of these calcium-poor pyroxenes. Tridymite
Tridymite
Tridymite is a high-temperature polymorph of quartz and usually occurs as minute tabular white or colorless pseudo-hexagonal triclinic crystals, or scales, in cavities in acidic volcanic rocks. Its chemical formula is SiO2. Tridymite was first described in 1868 and the type location is in Hidalgo,...
or quartz
Quartz
Quartz is the second-most-abundant mineral in the Earth's continental crust, after feldspar. It is made up of a continuous framework of SiO4 silicon–oxygen tetrahedra, with each oxygen being shared between two tetrahedra, giving an overall formula SiO2. There are many different varieties of quartz,...
may be present in the fine-grained groundmass of tholeiitic basalt, and feldspathoid
Feldspathoid
The feldspathoids are a group of tectosilicate minerals which resemble feldspars but have a different structure and much lower silica content. They occur in rare and unusual types of igneous rocks....
s are absent. Tholeiitic rocks may have a fine, glassy groundmass
Matrix (geology)
The matrix or groundmass of rock is the finer grained mass of material in which larger grains, crystals or clasts are embedded.The matrix of an igneous rock consists of finer grained, often microscopic, crystals in which larger crystals are embedded. This porphyritic texture is indicative of...
, as may other types of basalt.

Basalt magmas are partial melts of peridotite
Peridotite
A peridotite is a dense, coarse-grained igneous rock, consisting mostly of the minerals olivine and pyroxene. Peridotite is ultramafic, as the rock contains less than 45% silica. It is high in magnesium, reflecting the high proportions of magnesium-rich olivine, with appreciable iron...
produced by decompression melting in the Earth's mantle, a process described for igneous rock
Igneous rock
Igneous rock is one of the three main rock types, the others being sedimentary and metamorphic rock. Igneous rock is formed through the cooling and solidification of magma or lava...
s. Tholeiitic basalts are the most common volcanic
Volcano
2. Bedrock3. Conduit 4. Base5. Sill6. Dike7. Layers of ash emitted by the volcano8. Flank| 9. Layers of lava emitted by the volcano10. Throat11. Parasitic cone12. Lava flow13. Vent14. Crater15...
rocks on Earth
Earth
Earth is the third planet from the Sun, and the densest and fifth-largest of the eight planets in the Solar System. It is also the largest of the Solar System's four terrestrial planets...
, as they are produced by submarine volcanism
Submarine volcano
Submarine volcanoes are underwater fissures in the Earth's surface from which magma can erupt. They are estimated to account for 75% of annual magma output. The vast majority are located near areas of tectonic plate movement, known as ocean ridges...
at mid-ocean ridge
Mid-ocean ridge
A mid-ocean ridge is a general term for an underwater mountain system that consists of various mountain ranges , typically having a valley known as a rift running along its spine, formed by plate tectonics. This type of oceanic ridge is characteristic of what is known as an oceanic spreading...
s and make up much of the ocean crust. MORB, the acronym for typical mid-ocean-ridge basalt, is a type of tholeiitic basalt particularly low in incompatible element
Incompatible element
An incompatible element is a term used in petrology and geochemistry to describe an element that is unsuitable in size and/or charge to the cation sites of the minerals, and is defined by the partition coefficient between rock-forming minerals and melt being much smaller than 1..During the...
s. In contrast, alkali basalt is not typical at ocean ridges, but is erupted on some oceanic islands and on continents, as also is tholeiitic basalt.http://micro.magnet.fsu.edu/primer/techniques/polarized/gallery/pages/basalttholeiiticsmall.html Because the Moon is extremely reduced
Redox
Redox reactions describe all chemical reactions in which atoms have their oxidation state changed....
, all of its basalt is tholeiitic.
The source of this article is wikipedia, the free encyclopedia.  The text of this article is licensed under the GFDL.