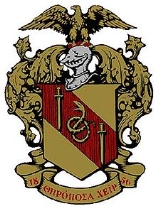 Encyclopedia
Theta Chi Fraternity is an international college fraternity
Fraternities and sororities
Fraternities and sororities are fraternal social organizations for undergraduate students. In Latin, the term refers mainly to such organizations at colleges and universities in the United States, although it is also applied to analogous European groups also known as corporations...
. It was founded on April 10, 1856 as the Theta Chi Society, at Norwich University
Norwich University
Norwich University is a private university located in Northfield, Vermont . The university was founded in 1819 at Norwich, Vermont, as the American Literary, Scientific and Military Academy. It is the oldest of six Senior Military Colleges, and is recognized by the United States Department of...
, Norwich, Vermont
Norwich, Vermont
Norwich is a town in Windsor County, Vermont, United States, located along the Connecticut River opposite Hanover, New Hampshire. The population was 3,544 at the 2000 census....
, U.S.
United States
The United States of America is a federal constitutional republic comprising fifty states and a federal district...
, and was the 21st of the 71 North-American Interfraternity Conference
North-American Interfraternity Conference
The North-American Interfraternity Conference , is an association of collegiate men's fraternities that was formally organized in 1910, although it began on November 27, 1909. The power of the organization rests in a House of Delegates where each member fraternity is represented by a single delegate...
men's fraternities.


Founding and early years at Norwich

Theta Chi Fraternity was founded on April 10, 1856, at Norwich University
Norwich University
Norwich University is a private university located in Northfield, Vermont . The university was founded in 1819 at Norwich, Vermont, as the American Literary, Scientific and Military Academy. It is the oldest of six Senior Military Colleges, and is recognized by the United States Department of...
in Norwich, Vermont, by two military cadets, Frederick Norton Freeman
Frederick Norton Freeman
Frederick Norton Freeman .He entered Norwich University in 1853 where his plan and idea led to the founding of Theta Chi Fraternity with fellow classmate and cadet Arthur Chase. Freeman was only 17 years old when Theta Chi was founded. He received a B.S. Degree in Civil Engineering in 1856 and an...
and Arthur Chase
Arthur Chase
Arthur Chase was the co-founder of Theta Chi Fraternity. He was born in Bellows Falls, Vermont and entered Norwich University in 1852 where he roomed with a young cadet named George Dewey who later became famous as an Admiral. Chase was 20 years old when he assisted his distant cousin Frederick...
. A third man, Egbert Phelps, is considered to be the "assistant founder" for lending his help and advice to Freeman and Chase although he was never an undergraduate member himself (he was a member of the Chi Psi
Chi Psi
Chi Psi Fraternity is a fraternity and secret society consisting of 29 active chapters at American colleges and universities. It was founded on Thursday May 20, 1841, by 10 students at Union College with the idea of emphasizing the fraternal and social principles of a brotherhood...
Fraternity). The first initiates after the founders were Edward Bancroft Williston
Edward Bancroft Williston
Edward Bancroft Williston was a brigadier general in the United States Army. He was a recipient of the Medal of Honor for gallantry during the American Civil War.-Biography:...
, Frederick Howard Farrar, Ridge Hudson, and Lorenzo Potter. The early history of Theta Chi Fraternity is closely connected with the history of Norwich University. In 1866 a massive fire devastated the university, completely destroying the Old South Barracks. This disaster prompted the university to move from Norwich, Vermont to its present location in Northfield, Vermont. During fall quarter in 1881, Norwich University was reduced to only 15 students and Theta Chi membership was reduced to one undergraduate member, James M. Holland. In November of that year, Phil S. Randall and Henry Hersey approached Holland and insisted that they be allowed to join Theta Chi; Holland agreed, thus saving the Fraternity from extinction.

The Fraternity was incorporated in Vermont in 1888, and acquired its first chapter house two years later. However, it remained a single entity for forty-six years until the Beta Chapter was installed at Massachusetts Institute of Technology in 1902. A Grand Chapter was organized in 1908 to direct the fraternity and promote its growth. In 1942, Beta Kappa Fraternity joined Theta Chi Fraternity, bringing 16 undergraduate chapters and over 6,000 undergraduate and alumnus members into the ranks. The Foundation Chapter was established in 1953 as a charity to provide educational scholarships and assistance. In 1965, the Zeta Gamma Chapter was installed at the University of Alberta in Edmonton, Alberta, Canada, making Theta Chi an international fraternity.

Initially, the Alpha Chapter and Grand Chapter volunteered to maintain all records of the Fraternity until 1923, when the first Executive Office was established in New York City. In 1928, the headquarters was moved to Huntington, West Virginia
Huntington, West Virginia
Huntington is a city in Cabell and Wayne counties in the U.S. state of West Virginia, along the Ohio River. Most of the city is in Cabell County, for which it is the county seat. A small portion of the city, mainly the neighborhood of Westmoreland, is in Wayne County. Its population was 49,138 at...
. In 1932, the headquarters moved again, this time to Trenton, New Jersey
Trenton, New Jersey
Trenton is the capital of the U.S. state of New Jersey and the county seat of Mercer County. As of the 2010 United States Census, Trenton had a population of 84,913...
. Since 1990, Theta Chi Fraternity's international headquarters have been located at 3330 Founders Rd, Indianapolis, Indiana.

The Greek motto of Theta Chi is Θηρόποσα Χείρ, which is translated as "An Assisting Hand." Theta Chi's motto was secret from the founding in 1856 until the 1930s at which time it was made public and incorporated into the fraternity's coat of arms.

When Freeman and Chase founded Theta Chi in 1856 they very clearly spelled out the purpose of the Fraternity in the original Constitution. Article I stated that the objects of Theta Chi were to “bind by closer bonds the members to each other and the mutual assistance of each of its members;” “the advancement and carrying out of any measures at the institution in which it shall be established which shall be of importance to its members,” and “the mutual benefit and improvement of all its members.”

The Fraternity's maxim is "Alma Mater
Alma mater
Alma mater , pronounced ), was used in ancient Rome as a title for various mother goddesses, especially Ceres or Cybele, and in Christianity for the Virgin Mary.-General term:...
First and Theta Chi for Alma Mater," and refers to one of the founding ideals of the Fraternity: loyalty to one's college or university as well as academic achievement.

The Fraternity's colors are military red and white. Its flower is the red carnation. The national alumni publication is The Rattle, named for the rattlesnake that appears on the fraternity's coat of arms and badge. It has become a Theta Chi tradition to celebrate Founders Day on April 10, usually as an alumni gathering.

The original Theta Chi badge was designed by Egbert Phelps, assistant founder of the Fraternity, sometime before the founding date. The records show that the first badges were ordered by Freeman from a Boston jeweler on April 12, two days after the founding. The members, by vote, decided to wear the badges in public for the first time on June 9, 1856.

Sometimes mistakenly called the crest, the Fraternity Coat of Arms
Coat of arms
A coat of arms is a unique heraldic design on a shield or escutcheon or on a surcoat or tabard used to cover and protect armour and to identify the wearer. Thus the term is often stated as "coat-armour", because it was anciently displayed on the front of a coat of cloth...
is described in heraldic phraseology, as: "Or on a bend gules, a nowed serpent between two swords, points downward, pale wise, all of the first. On an Esquire's helmet the crest an eagle displayed Or".

New Member Button: An insignia worn at appropriate times by men who have joined Theta Chi Fraternity as New Members, having yet to be initiated into the fraternity. The New Member button is a small metal oval, red in color, with a white edge, and crossed diagonally with white stripes forming an "X".

A recognition badge is a small button which is worn on a coat lapel, and comes in three versions. The official recognition button is a small reproduction of the official badge. A second version is a miniature coat of arms, while a third version utilizes the fraternity letters.

Frank Schrenk (Kappa/Pennsylvania 1915) wrote the Creed of Theta Chi. It is both an affirmation of the founding principles of Theta Chi and a mission statement for the Fraternity:

I believe in Theta Chi, its traditions and its ideals. Born of sturdy manhood, nurtured by resolute men, ennobled by high and sacred purpose, it has taken its place among the educational institutions of America as a promoter of knowledge, an advancer of culture and a builder of character.

It inspires true friendship: teaches Truth, Temperance and Tolerance, extols virtue, exacts harmony, and extends a helping hand to all who seek it.

I believe in the primacy of Alma Mater; in the usefulness of my Fraternity, in its influence and its accomplishments and I shall do all in my power to perpetuate its ideals, thereby serving my God, my country and my fellow-man.
The Creed is traditionally recited by members at chapter meetings, and is often discussed in new member education programs to teach the values and ideals of the Fraternity.

On a site 200 feet northeast of this monument in the Old South Barracks of Norwich University, Frederick Norton Freeman, '57, and Arthur Chase, '56, founded Theta Chi Fraternity at 9 p.m., April 10, 1856

Theta Chi currently has 130 active chapters , as well as 10 colonies and interest groups across the United States
United States
The United States of America is a federal constitutional republic comprising fifty states and a federal district...
and Canada
Canada
Canada is a North American country consisting of ten provinces and three territories. Located in the northern part of the continent, it extends from the Atlantic Ocean in the east to the Pacific Ocean in the west, and northward into the Arctic Ocean...
and has initiated over 170,000 members since its founding. It is a member of the North-American Interfraternity Conference
North-American Interfraternity Conference
The North-American Interfraternity Conference , is an association of collegiate men's fraternities that was formally organized in 1910, although it began on November 27, 1909. The power of the organization rests in a House of Delegates where each member fraternity is represented by a single delegate...
. As of May 2007, Theta Chi was the 9th largest collegiate male fraternity.

Today, Theta Chi Fraternity's undergraduate members are extremely involved on their respective campuses with a multitude of leadership organizations, including Omicron Delta Kappa
Omicron Delta Kappa
Omicron Delta Kappa, or ΟΔΚ, also known as The Circle, or more commonly ODK, is a national leadership honor society. It was founded December 3, 1914, at Washington & Lee University in Lexington, Virginia, by 15 student and faculty leaders. Chapters, known as Circles, are located on over 300...
(ODK), the Order of Omega
Order of Omega
The Order of Omega is an undergraduate Greek society recognizing "fraternity men and women who have attained a high standard of leadership in inter-fraternity activities." It functions as an adjunct to traditional fraternal organizations, rather than a social or professional group in se...
, Student Government Association (SGA), Phi Beta Kappa, NCAA athletics, and multiple philanthropies, including the Children's Miracle Network
Children's Miracle Network
The Children's Miracle Network Hospitals is an international non-profit organization that raises funds for children's hospitals, medical research and community awareness of children's health issues. The organization, founded in 1982 by the Osmond family and John Schneider, is headquartered in...
, the American Red Cross
American Red Cross
The American Red Cross , also known as the American National Red Cross, is a volunteer-led, humanitarian organization that provides emergency assistance, disaster relief and education inside the United States. It is the designated U.S...
, Relay for Life, as well as various organizations that support the U.S. military overseas.