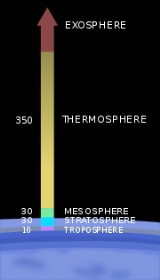 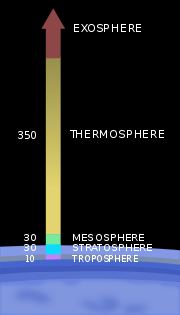 Given that the tropopause responds to the average temperature of the entire layer that lies underneath it, it is at its peak levels over the Equator, and reaches minimum heights over the poles. On account of this, the coolest layer in the atmosphere lies at about 17 km over the equator. Due to the variation in starting height, the tropopause extremes are referred to as the equatorial tropopause and the polar tropopause.

Alternatively, a dynamic definition of the tropopause, the dynamic tropopause, is used with the aid of potential vorticity
Potential vorticity
Potential vorticity is a quantity which is proportional to the dot product of vorticity and stratification that, following a parcel of air or water, can only be changed by diabatic or frictional processes...
, which is defined as the product of the isentropic density
Density
The mass density or density of a material is defined as its mass per unit volume. The symbol most often used for density is ρ . In some cases , density is also defined as its weight per unit volume; although, this quantity is more properly called specific weight...
, i.e. the density that arises from using potential temperature as the vertical coordinate, and the absolute vorticity. given that this quantity attains quite different values for the troposphere and the stratosphere. Instead of using the vertical temperature gradient as the defining variable, the dynamic tropopause surface is expressed in potential vorticity units (PVU), with the tropopause layer typically lying within the 1.5–2 PVU surface in the Northern Hemisphere
Northern Hemisphere
The Northern Hemisphere is the half of a planet that is north of its equator—the word hemisphere literally means “half sphere”. It is also that half of the celestial sphere north of the celestial equator...
, although no universal values exist. Given that the absolute vorticity is positive (negative) in the Northern (Southern
Southern Hemisphere
The Southern Hemisphere is the part of Earth that lies south of the equator. The word hemisphere literally means 'half ball' or "half sphere"...
) hemisphere, the threshold value should be taken as positive (negative) north (south) of the equator. Theoretically, to define a global tropopause in this way, the two surfaces arising from the positive and negative thresholds need to be matched near the equator using another type of surface such as a constant potential temperature surface. Nevertheless, the dynamic tropopause is useless at equatorial latitudes because both the absolute vorticity is close to zero —consequently making potential vorticity to vanish— and the isentropes are almost vertical.

It is also possible to define the tropopause in terms of chemical composition. For example, the lower stratosphere has much higher ozone
Ozone
Ozone , or trioxygen, is a triatomic molecule, consisting of three oxygen atoms. It is an allotrope of oxygen that is much less stable than the diatomic allotrope...
concentrations than the upper troposphere, but much lower water vapor
Water vapor
Water vapor or water vapour , also aqueous vapor, is the gas phase of water. It is one state of water within the hydrosphere. Water vapor can be produced from the evaporation or boiling of liquid water or from the sublimation of ice. Under typical atmospheric conditions, water vapor is continuously...
concentrations, so appropriate cutoffs can be used.

The tropopause is not a "hard" boundary. Vigorous thunderstorm
Thunderstorm
A thunderstorm, also known as an electrical storm, a lightning storm, thundershower or simply a storm is a form of weather characterized by the presence of lightning and its acoustic effect on the Earth's atmosphere known as thunder. The meteorologically assigned cloud type associated with the...
s, for example, particularly those of tropical origin, will overshoot
Convective overshoot
Convective overshoot is a phenomenon of convection carrying material beyond an unstable region of the atmosphere into a stratified, stable region...
into the lower stratosphere and undergo a brief (hour-order) low-frequency vertical oscillation
Oscillation
Oscillation is the repetitive variation, typically in time, of some measure about a central value or between two or more different states. Familiar examples include a swinging pendulum and AC power. The term vibration is sometimes used more narrowly to mean a mechanical oscillation but sometimes...
. Such oscillation sets up a low-frequency atmospheric gravity wave capable of affecting both atmospheric and oceanic currents in the region.

Most commercial aircraft are flown below the tropopause or "trop" if at all possible to take advantage of the troposphere's temperature lapse rate. Jet engines are more efficient at lower temperatures.